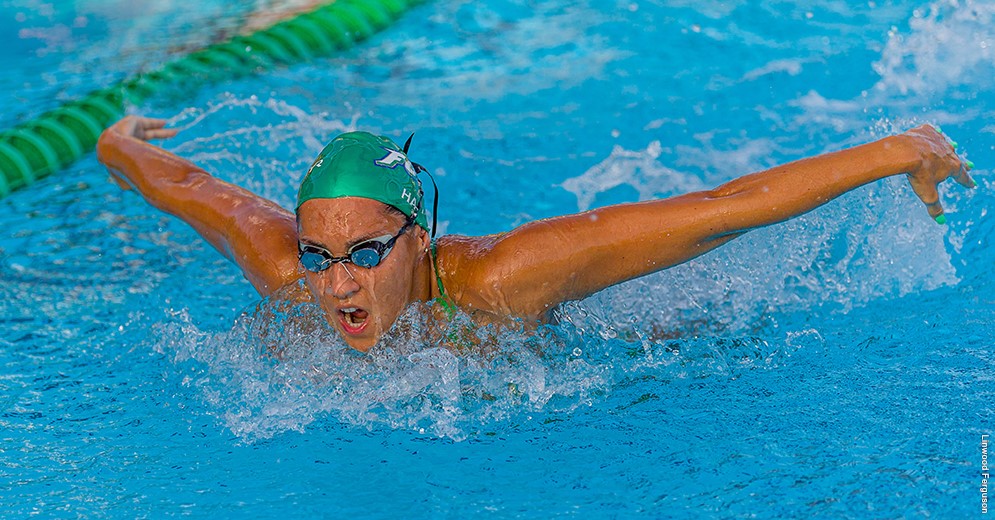 JACKSONVILLE, Fla. — Campbell University swimming won five individual events and won the 200-free relay as the Fighting Camels split a tri-meet with North Florida and Florida Gulf Coast in the season opener for all three Coastal Collegiate Sports Association members Friday afternoon. The Camels beat the host North Florida Ospreys, 176-85, while falling to the FGCU Eagles by a slim margin of 133-128.

The Camels went one-two in the 50 free as Renshaw finished 0.30 seconds behind Wilson’s time with a clocking of 24.62.

The Camels opened the meet by taking second place in the 400-medley relay as Everritt, Skyler DeWall, Baiotto and Wilson combined to swim a 3:58.58.

Campbell will again face FGCU tomorrow as part of a tri-meet hosted by the Georgia Southern Eagles in Statesboro, Ga. The meet is set to begin at noon inside the GSU Recreation Activity Center.

“It’s no secret that we have a young team, but that’s what makes it so exciting,” said head coach Dave Rollins. “Bringing these girls together for a road trip against CCSA competition was the perfect way for us to start the year. Plus, getting to see some first-time Eagle wins is always special. We are focused on what we need to do to get better week to week, meet to meet. There are some details that we need to clean up, but that’s to be expected early in the season. The most important thing is how they react in the moment and how they mentally respond when faced with a challenge.”

The freshman class had a strong showing in its first official meet for FGCU. Hannah VanDress won the 1000-yard freestyle by seven seconds, laying down her second-fastest split time in the final 50 yards. Sulenta (Zagreb, Croatia/Gimnazija I ekonomska skola Benedikta Kotruljevica) was 0.68 seconds off the winning time in the 100 Back and rookie Anna Hogan finished in the top three of the 100-yard breaststroke. The top three times in Hogan’s (Louisville, Ky./DuPont Manual HS) race were separated by just 0.43 seconds. Reinhardt (Herdecke, Germany/Helene-Lange-Gymnasium Dortmund) also added points, taking home first place in the 500 Free.

“Congratulations to Lucy, Kaja and Hannah on earning their first-ever wins as Eagles,” said Rollins. “It’s something I’m sure they will always remember. It was especially exciting to see Kaja win, as she had never swam the 500-yard freestyle and she was extremely consistent.”

Through the first seven events, the Eagles held an 89.5-40.5 point advantage over UNF and a 66-64 point edge over Campbell.

Down the stretch, FGCU continued to pick up victories that provided vital points to the team. Fry (Oakwood, Ohio/Oakwood HS) claimed the 100 Fly and senior Elizabeth Zeiger (Cumberland, R.I./Homeschool) earned a first-place finish in the 200 IM, followed by runner-up Hogan.

The Eagles swept the 200 Breast, as Halmai picked up her second individual win of the meet, while White and Hogan rounded out the top three. In the final event of the day, the team of freshman Hailey Jerew (Miami, Fla./Cutler Bay Senior HS), Reinhardt, Sulenta and Fry finished second in the 200-yard freestyle relay.

Up Next
The team will be back in action tomorrow (Saturday, Oct. 5) to take on CCSA foes Campbell and Georgia Southern in Statesboro, Ga. at the Recreation Activity Center. The meet is set for a Noon start time.

JACKSONVILLE, Fla. – North Florida swimming battled two tough teams in the CCSA and came out on the wrong end, but saw strong swims from several athletes.

Coffey Talks
“We swam against two good teams in our conference today. I’m very happy with the way raced. We still have some things to work on, but we have made a lot of progress. I am starting to see our hard work paying off and now we get ready for our meet in two weeks.” – head coach Ian Coffey

Up Next
The Ospreys have a week off before returning to action in a dual meet against Georgina Southern Saturday, Oct. 19 at 1 p.m. at Bolles High School. Prior to the meet, the Ospreys will celebrate five seniors and their careers.