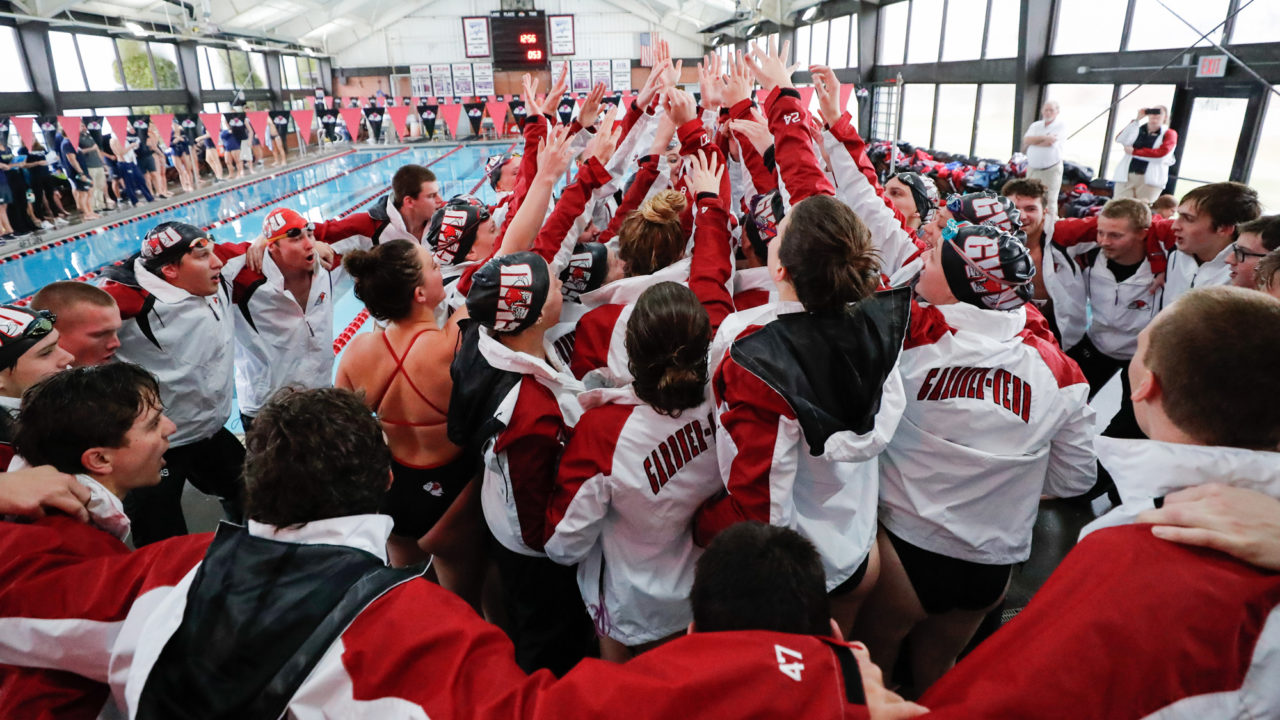 In the absence of Incarnate Word, FAU and Gardner-Webb are locked-up in a team battle at the 2021 CCSA Championship, with Gardner-Webb leading by 20 points. Archive photo via Gardner-Webb Photo Staff

After the women’s meet ended in a tie between FGCU and Liberty, the men’s teams began their portion of the CCSA Championships in Lynchburg, Virginia. Notably, the defending champions Incarnate Word will not be in attendance at the meet as the school announced today that all athletics will be paused through February 21 due to the inclement weather situation in Texas. The Incarnate Word women were in attendance at the women’s meet, where they finished 3rd as a team.

In the first event of the night, the 200 medley relay, Gardner-Webb got off to a good start, winning the event by two seconds over runner-up Old Dominion. The team from GWU, composed of Brady Fields, Johathan Frye, Tim Bennett, and Seggio Bernardina combined for a time of 1:27.32, chopping over 2.5 seconds off of their seed time of 1:30.01. With their time, the team also broke the CCSA meet record of 1:27.52 that was set by Incarnate Word in 2014. Notably, this marks the 3rd-straight championship title for the school in this event, with Fields competing on all of them.

In the 3m diving event, senior Logan Downey won by almost 100 points in a score of 320.00 over runner-up Michael Cannatelli. In the absence of multiple programs, the field only consisted of 4 divers, all from FAU.

Shortly after the diving was completed, the racing resumed with the 500 freestyle, where FAU once-again swept the podium with a trio of seniors going 1-2-3. Josh Fountain won the race in a time of 4:31.62, followed closely behind by teammates Will Smith (4:33.65) and Clay Riemenschneider (4:35.01). Smith knocked 8 seconds off of his seed time with his swim, coming into the meet seeded 6th with a 4:41.76.

FAU kept its winning streak alive in the 200 IM, where junior Alec Peckmann bested the field by over 2 seconds to touch first in a time of 1:48.10. His time marked a new school record, coming in under the previous record of 1:49.74 that was set by Csaba Pek in 2012. Peckmann transferred to this season FAU from Penn State, where he was a member of the school’s Big 10 Championship Team. Behind Peckmann, a trio of Gardner-Webb swimmers finished 2-3-4, led by senior Chase Mattingly who finished in a time of 1:50.61.

In the 50 freestyle, Gardner-Webb’s Brady Fields got his second win of the night, narrowly out-touching Old Dominion’s Noah Wilkins 20.31 to 20.33 for the victory. Both swimmers knocked over a half second off of their seed times with their performances.

Gardner-Webb also picked up a victory in the 800 freestyle relay, where the team of Tim Bennett, Christian Jann, Drew Mintz, and Landon Clark combined for a final time of 6:42.33. They touched almost 10 seconds ahead of FAU, who finished second in a time of 6:51.00.

Based on tonight’s scores, the face for first appears to be between Gardner-Webb and FAU, who are currently separated by about 20 points. Bellarmine and Old Dominion are also close in the fight between 3rd and 4th place.

Thank you for the updates! Can we get a link to the men’s psych sheet?