Family at the Picadilly Circus: 11 Sets of Siblings Set to Swim in London 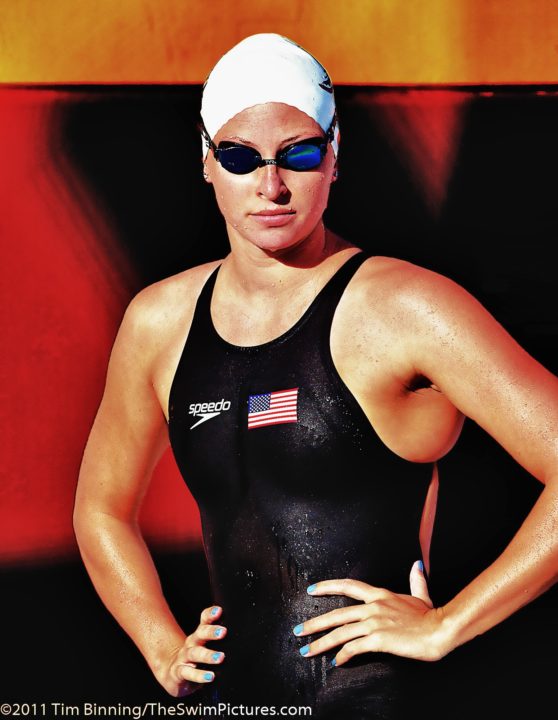 The sisters Anderson (Haley and Alyssa) are not the only siblings going to London. (Photo Courtesy: ©Tim Binning/TheSwimPictures.com)

Is swimming genetic? The physical tools that make one a good swimmer certainly are. The mental (or parental) drive to slog through hours of practice at 5:30 in the morning is. It’s one of the few sports where siblings often practice together (even brothers and sisters), which can make practice attendance easier.

Perhaps, then, it’s no surprise that there are an even 11 sets of siblings who will be competing in swimming at the Olympics. None of them quite live up to the brothers Al Jasmi of the UAE, who in 2010 made history by making up all four legs of their country’s 400 free relay at the World Championships, but the list is still impressive.

Note: there are other countrymates with similar last names who are not siblings. Riaan and Roland Schoeman are not brothers. There are plenty of double last names in Japan and China, but we can’t find any indication of close relationships. Let us know if you know differently.

Brett/Shaune Fraser, Cayman Islands – the brothers Fraser both attended and trained at the University of Florida, where they became the first brothers in 16 years to win NCAA Titles in the same event: the men’s 200 free. They will swim similar, though not identical, schedules in London. Both have the 100 and 200 free on their lineups, but the younger Brett will add the 50 to that while the older Shaune has the 100 fly as his third event.

Cate/Bronte Campbell, Australia – Cate and Bronte Campbell become the first siblings to qualify for the same Australian Olympic Swim Team since Munich in 1972, when Karen and Norelle Moras both made it. The sisters Campbell have birthdays just 6 days apart (Cate turned 20 in May; Bronte 18) and they finished 1-2 in each of the three rounds of the 50 free at Australia’s Olympic Trials. That means not only are they on the same time, but they’re in the same event. Cate will also have a chance at some medals as a part of the Australian 400 free relay.

Alyssa/Haley Anderson, United States – The first of two pool/open water combos, older sister Alyssa has a spot (likely prelims) on the American 800 free relay, while the younger Haley will swim the women’s 10km open water marathon. Unlike 8 of the other 9 pairs on the list, these two train largely separately, with Alyssa at the University of Arizona and Haley at USC.

Andreina /Yanel Pinto, Venezuela – The Pintos are the other pair of sisters on this list. They are both distance specialists, and in a fun bit of parity also include one in the pool and one in the rowing basin. Andreina qualified via A-times in the 400 and 800 freestyles, and Yanel will be the South American continental representative in the open water 10km marathon. This is another pair from the Gator Swim Club, though they never competed collegiately. They’re also about the same ages as the Andersons.

Daniel/Gerglely Gyurta, Hungary – One of two pairs from Hungary – perhaps their notoriously difficult training regiments require familial support in the lane. These two are vastly different swimmers: Daniel will swim the breaststrokes, including the 200 where he is the defending and reigning World Champion. The younger Gergely is one of two Hungarian entries in the 1500 free.

David/Evelyn Verraszto, Hungary – The other Hungarians, David and Evelyn, are both IM’ers. David specializes in the longer 400 IM (he’ll swim both) while his little sister Evelyn focuses on the shorter distances and will swim just the 200 IM. Their coach and father Zoltan Verraszto is himself an Olympian who won two medals at the 1980 Games for Hungary.

Colin/Sinead Russell – Another co-ed set of siblings, one of two pairs from Canada, who like the Verrasztos trained with their parents (first dad Cecil, then mom Erin). Older brother Colin will swim on the men’s 400 and 800 free relays, while Sinead will focus on the backstrokes with entries in the 100, 200, and the 400 medley relay. The best medal chances of the pair is Sinead in either backstroke, though her 200 has been better this year. Sinead is another Florida-bound swimmer, though brother Colin stayed closer to home and swam for the University of Toronto.

Brittany/Heather MacLean – Younger sister Brittany booked her ticket early in the Canadian Trials meet when she broke the Canadian National Record in the 400 free. After Heather missed a spot in the 200 free the next night (Brittany earned a second swim as part of the relay), Heather had to wait until nearly the end of the meet and the 100 free. She touched third, and then immediately whipped her head around to see that the top four had been fast enough for Swimming Canada to push them through. The women in the pool weren’t the only ones elated, as Brittany nearly tackled her sister upon climbing out of the pool.

Jason/David Dunford, Kenya – The Stanford-educated Kenyans are far-and-away the best swimmers to ever come from the country. In 2006, the two became the first ever African Champions from their native land, and are also the first (Jason) and second (David) Kenyan swimmers in history to qualify for the Olympics. The pair trained together until very recently, when Jason moved to finalize his Olympic preparations in Europe. David had said he was retiring after Beijing, but stuck around for another four years.

Florent/Laure Manaudou, France – Another co-ed pair, these two are at vastly different stages of their careers. Laure has hit the pinnacle of the sport, fallen from grace, had a child, and returned as one of her country’s best. She will swim the 100 and 200 backstrokes, along with the 400 medley relay. Younger brother Florent is just now coming onto the international scene, and will be entered in the 50 free. Consequentially, Florent made the team in the 50 free over 3rd-place finisher Fred Bousquet, who is the father of Laure’s child. Laure currently trains in the United States at Auburn, but plans to return to her home country after the Games, where Florent trains.

Steffen/Markus Deibler, Germany– Germany’s famous Deibler brothers physically look nothing alike. Younger brother Markus towers over Steffen: about 4 inches net between the two. Markus also has dark hair, while Steffen’s locks are golden. But what they do have in common is immense talent. Steffen will swim the 100 fly and Markus will swim the 200 IM. Younger brother Markus si just coming into his won as an Olympic-level swimmer, and both could final in their respective events.

They are practicing together in Hamburg.

Dang! I knew I’d forgotten one. Thanks Dolphin!

Cate Campbell also swims the individual 100 free. And i think one of the Campbell sisters will win a medal in the 50, but not both.

Big call with Alshammar, Kromowidjojo and Halsall with 24.1s and Veldhuis 24.2s. I think Cate has a shot at bronze. Halsall and Kromowidjojo will challenge 24s barrier. I am not aware of Kromowidjojo but I know Fran Halsall is in the form of her life right now in training.

I think Cate has a chance at bronze too, and why would it be a big call?

After few years getting sick, this year she has finally been healthy. Remember that Cate beat Libby when she was only 15 yo, in 24.4 (in textile), and won bronze in Beijing.
She is still 20 yo, and at the peak of a female sprinter.