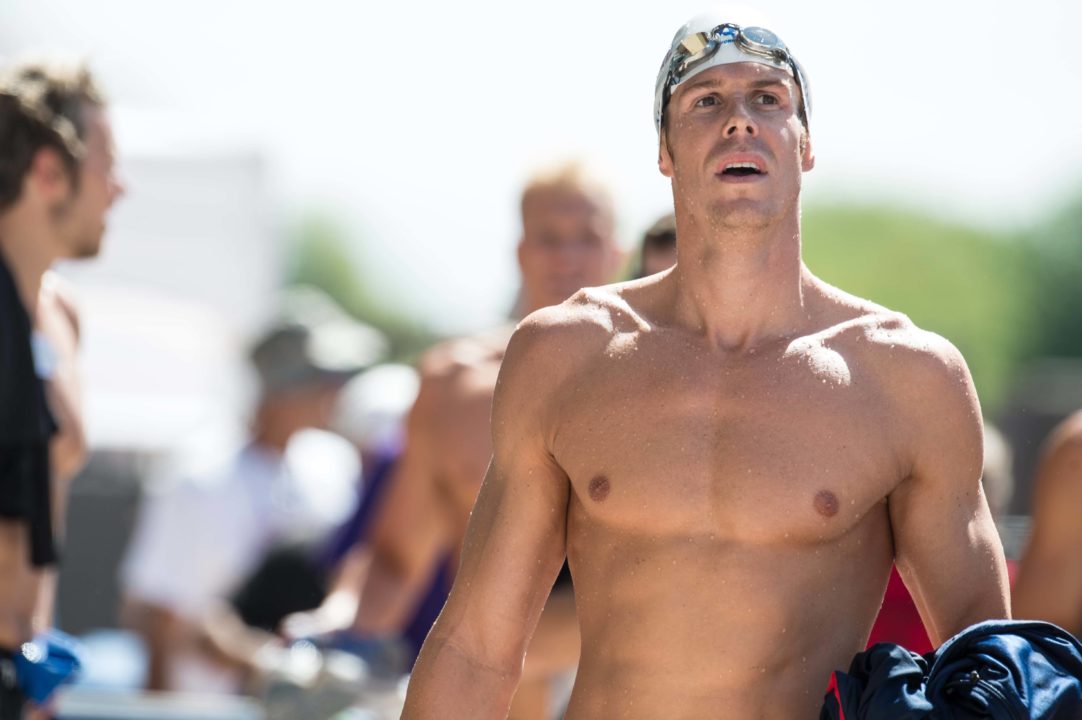 This is a matter that has been a long time coming; since the 2012 Olympic Trials, Townsend hasn’t even shown up at a South African National Championship meet to attempt qualification for Worlds in 2013 or the Commonwealth Games in 2014.

He did race the 200 IM in London, where he finished 21st in prelims in a 2:00.67. Also in his trophy case for South Africa is a gold medal from the 2004 Olympics in the 400 free relay (which stood as a World Record for several years as well); two relay bronze medals from the 2010 Commonwealth Games, and three gold medals from the 2011 All-Africa Games.

And now, he’s racing to become a part of Team USA and compete at the 2014 Pan Pac Championships and the 2015 World Championships, though the relationship would really be solidified with even a top 6 finish and a spot on the National Team.

Townsend has spent the last couple years swimming a lot of meets for prize money; he finished 8th overall at the 2012 FINA World Cup, including winning 11 individual races.

None-the-less, he’s put up individual times that show he’s going to be competitive for a spot on the U.S. National Team. His three stated primary events are the 200 IM, the 100 free, and the 200 free.

Based on current rankings, Townsend has some work to do if he wants to make the Pan Pacs team, especially with only the top four going in the 100 and 200 freestyles. His shot is better for Worlds in 2015, which is a team also being selected in 2014, with bigger relay rosters.

There have been some relevant retirements (Ricky Berens) and returns (Michael Phelps) since then, plus the Ryan Lochte injury that no doubt will have impact on his performances, but those time targets will probably be fairly close to the 2014 targets.

Making the Pan Pacs team in 2014 is a little bit of a long-shot, but well within range if Townsend goes a lifetime best. Ironically, his best chance might be the 200 IM. Phelps isn’t swimming it, and Lochte, while he looked good in Athens, is a question mark with his injury, leaving Dwyer and Kalisz as the surest bets, and a battle with Lochte, Austin Surhoff, Josh Prenot, and a few others for the 3rd spot for Townsend. Of course, if Lochte and Phelps do what Lochte and Phelps do in the 200 IM, then that story changes.

I do, however, believe that he has a better-than-likely chance at making the 2015 Worlds team if he’s pretty tapered for Nationals. Making the 400 free relay there is a good chance, and probably about a 50/50 for Pan Pacs.

Here’s the big caveat: by all accounts, Townsend has been training well, very well, in the last couple of seasons, but he’s had no reason to focus on a big taper. He’s had more money to make by swimming fast at multiple meets in season, so for all we know, his “lifetime bests” aren’t as good as he’s capable of this year. If Townsend has been building, and if he hits a pent-up two-year taper in Irvine, especially in an event like the 100 free that is so tight, a Pan Pacs spot could be his.

Wait a sec…we know for sure Phelps isn’t swimming the 200 IM at Nationals?

No…I was overselling that. He might. I forgot about his 200 IM from Santa Clara.

X and I must’ve been reading the article at the same time and thinking the same thing.

Where did the info come in that Phelps wasn’t swimming the 200 IM at nationals?
Was that said in an interview or did they release the psych sheet for nationals?

Good luck Darian. At least Team USA will pay for your trip to Worlds and Pan Pacs! It’s also nice to see your new fellow citizens being so welcoming. RSA could learn a lot from that.