Darian Townsend is one of the world’s great swimmers and he’s also an outstanding person. Darian’s accomplishments in the pool are phenomenal. He has an Olympic gold medal as a member of South Africa’s famed 2004 400 free relay, which is perhaps the best-known swimming accomplishment in the country’s history. He’s also a former world record holder 200 IM in short course meters, a 3 time Olympian, an 8 time NCAA champion at Arizona, and holds the honor for the most masters world records held by a male in an age group.

Out of the water he’s known for his charismatic personality, humble demeanor, humor and keen insight about swimming (he’s an excellent coach).  Now Darian Townsend is an American citizen.

Townsend has lived in the United States for nearly 10 years and is proud of what he’s accomplished in the country.  He’s firmly planted in US society and is eager to continue both his personal and athletic development.   Townsend’s citizenship now makes him eligible for competition on US national teams and he’ll be competing next month in Irvine at the USA Swimming national championship in Irvine.

Townsend’s program in Irvine will include 100 and 200 free, 200 IM and his “fun” events 100 back and 100 fly.  We caught up with Darian via Skype to discuss his new status, his training with Garrett McCaffrey at the Phoenix Swim Club, his partnership with A3 Performance and the New York Athletic Club.

The relevant FINA rule is General Rule 2.5, which requires that a swimmer must be a citizen and have lived in a nation for at least one year before competing for them:

GR 2.5 – When a competitor or competition official represents his/her countri in a competition, he/she shall be a citizen, whether by birth or naturalisation, of the nation he/she represents, provided that a naturalised citizen shall have lived in that country for at least one year prior to that competition. Competitors, who have more than one nationality according to the laws of the respective nations must choose one “Sport Nationality” and be affiliated to one Member only.

While there have been several swimmers around the world who have jumped nationalities after competing for one country, it is rare for athletes to switch their sporting citizenship to the United States. That’s because competition in the U.S. is steep for spots on international rosters, and competition for funding is equally as great.

The most recent notable example of this is Mike Alexandrov, who swam at the 2004 and 2008 Olympics before officially changing his sporting citizenship to the U.S.A. in 2009.

“We are very proud and honored that Darian chose to become a US citizen and represent this great country. America is the land of opportunity, where Darian may now compete for a coveted position on our international teams. His participation at the Phillips 66 National Championships next month in Irvine will be his first attempt to qualify for Team USA, for selection on our Pan Pacific Championships team.

“Darian joins an extremely talented group of National Team swimmers who positively represent our nation in and out of the pool on a daily basis. His longtime commitment, humility and discipline mirror the amazing attributes that all swimmers share and enjoy in our sport.”

See Darian Townsend in action below:

Keeping it fun. Darian Townsend waited until the last minute to come to the block leaving Nathan Adrian guessing if he’d show for the race. (Photo: Mike Lewis – Courtesy of U.S. Masters Swimming) 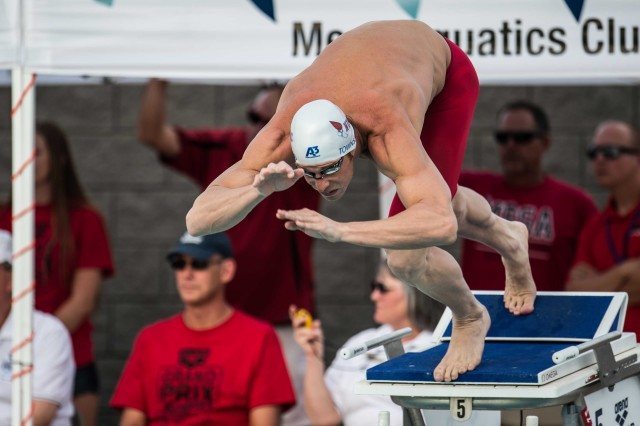 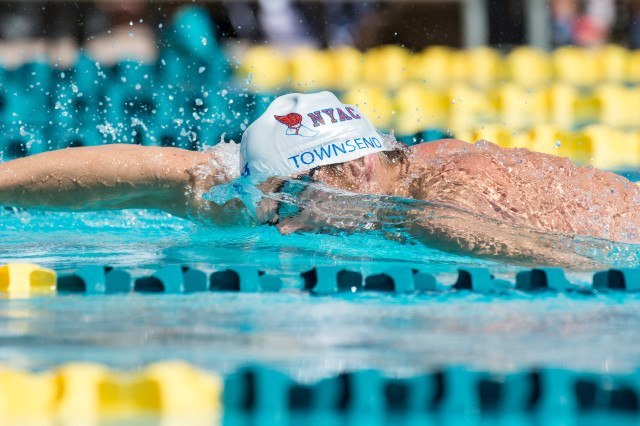 This is awesome, the US couldn’t be represented by a better person. Congrats, Darian!

this is big deal, and DT is swimming fast. Can’t wait to see how he swims over the next 18 months!