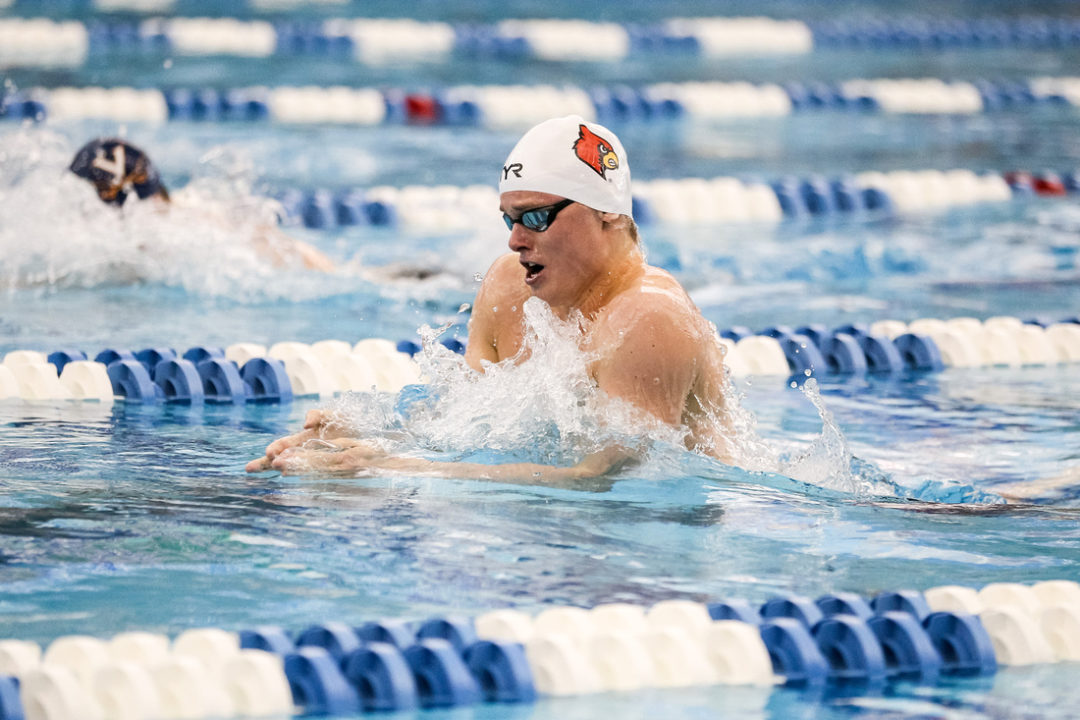 University of Louisville senior Evgenii Somov made history in multiple ways with his 100 breast title tonight at the 2021 ACC Championships. Not only did Somov break the school, meet, and overall ACC records with his time of 51.03, he also became only the second man in ACC history to win the 100 breaststroke all four years of collegiate competition. Somov’s time tonight moves him to #14 all-time in the event.

The only other swimmer to accomplish that four-peat was NC State’s Duncan Goodhew, who swept those titles at the 1976-1979 ACC Championships. Goodhew nearly did the same in the 200 breast, only missing out on that title in 1977, when he Duke’s Eric Steinhouse won.

Longtime swim fans may remember that Goodhew was a British swimmer who actually won the gold medal in the 100 breaststroke at the 1980 Olympic Games in Moscow, which were boycotted by the United States. Goodhew also earned a bronze medal at those Games as part of Britain’s 4×100 medley relay team.

Somov swept the breaststroke titles as a freshman, but has lost the 200 breast the last two years to Georgia Tech’s Caio Pumputis. The two will mostly likely square off once again tomorrow night in the final of the 200 breast on the final day of competition.

Louisville joined the ACC for the 2014-2015 season, and since then they’ve won 20 individual championships:

No other Louisville swimmer has won four-straight individual titles. Grigory Tarasevich won the 100 back three-straight times, from 2015-2016, and current senior Nick Albiero could match Somov’s four-straight titles, if he wins the 200 fly tomorrow evening.

Currently, Louisville has the highest score in the meet, with a 25-point lead over Virginia Tech, and if they are able to maintain that lead, they will win their first team ACC Men’s Championships, after finishing second every year from 2015-2019.

Why do the live results just show women’s events?