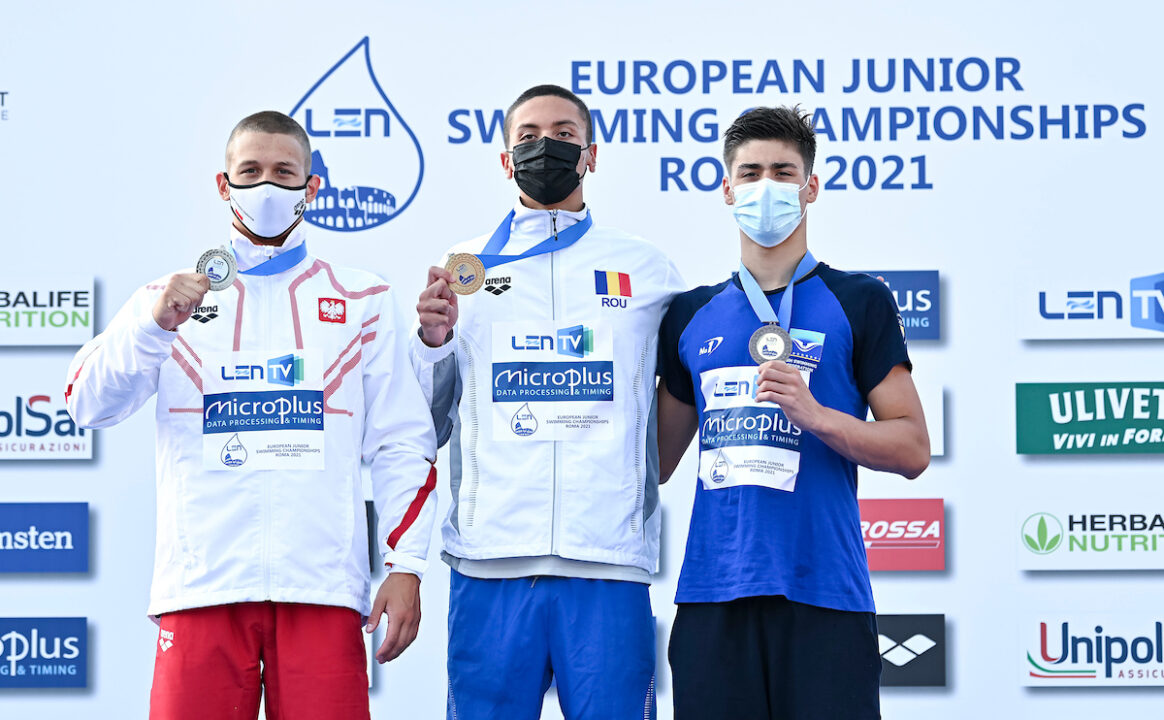 Lekic, who was his country's first-ever medalist at the European Junior Swimming Championships, told the CAS that his positive test was the result of a tainted supplement.

Above photo: Jovan Lekic is on the right along with fellow medalists in the 200 free at the 2022 European Junior Swimming Championships.

The international Court of Arbitration for Sport (CAS) has lifted the suspension of Bosnia and Herzegovina swimmer Jovan Lekic.

Lekic was given a two-year anti-doping suspension on October 26, 2021 by the B&H Anti-Doping Control Agency after testing positive for the banned substance higenamine last summer.

In his appeal, Lekic, who was 17 at the time of the positive test, accepted the violation but contended that he bears “no significant fault or neglicance,” and that the suspension period should be reduced as a result.

On June 26, 2021, Lekic raced at the 10th International Swimming Meeting in Bnaja Luka as a final preparation for the upcoming European Junior Swimming Championships. After a race, he was subjected to an anti-doping urine test, which came back positive for higenamine – which is banned both in competition and out of competition.

Two weeks later, he raced without knowledge of his first test, and again tested positive for the same substance at the European Junior Swimming Championships. At that meet, he won a bronze medal in the 200 free and a silver medal in the 400 free.

The crux of Lekic’s argument is that he believes he took all reasonable care to avoid testing positive. According to the CAS appeal, Lekic began swimming for Dr. Goran Grahovac, whom he called the “best coach in the country,” in 2012.

In 2019, Lekic bought his own supplements, but that Dr. Grahovac stopped that and instructed that he would buy all of the athlete’s supplements “as a way to ensure that the supplements…were not contaminated.”

Grahovac holds a PhD in swimming at the University of Banja Luka and is an associate professor in the school of physical education and sport there.

Lekic says that it was his understanding that Dr. Grahovac checked all of the supplements with a doctor, Dr. Ponorac, to ensure that they were clean. The athlete said that he put his “full trust” in Dr. Grahovac, his coach, and that he also read the container labels of all supplements given to him himself.

Dr. Ponorac is a sports medicine specialist and is also an associate professor at the University of Banja Luka in the Department of Physiology, Faculty of Medicine.

Lekic says that about 30 minutes before his race at the Banja Luka meet where he first tested positive, his coach gave him a supplement called ALLMAX impact Igniter, and that he added it to his water bottle and drank it after reading the ingredients list.

Lekic then tested positive after his race, which he says was the first official doping control test of his career.

While higenamine isn’t listed on the label for ALLMAX, Dr. Grahovac told him that he had learned that the product “could contain higenamine,” which was confirmed after a sample of the product was sent to a laboratory for testing.

A ‘Supplement 411’ article on the US Anti-Doping Association website dated June 22, 2021, just days before Lekic’s positive test, warned athletes that a certain lot of ALLMAX Impac Igniter, a preworkout, was tested and found to have had higenamine. A previous version of the supplement listed higenamine on the label, but that listing was removed.

Further evidence included photos of Lekic that were purported to be him attending an anti-doping training when he was 10-years old.

On totality of the evidence, including the unlisted ingredient, the fact that he was a minor, the fact that two doctors, one of whom is an experienced anti-doping expert, had cleared the supplement, his limited experience with anti-doping, and the fact that he declared the substance on his forms, the appeal panel found that his degree of fault fell under the “light” category, mandating a suspension period of between four and eight months. On further examination of the circumstance and his behavior, even as compared to other athletes who dealt with tainted supplements, the panel found that his should be on the lower end of that range, closer to four months than eight.

The anti-doping association of Bosnia & Herzegovina disputed this contention, that a reasonable internet search would have shown that higenamine was an ingredient in the ALLMAX Impact Lighter. The BH group also contended that the sample that was sent for testing was not the same as the sample that Lekic had presented originally, saying that photographs of the supplement sent to the seller of the supplement did list higenamine, but that photographs shown to the CAS appeal did not list it.

Further, the product’s website clearly stated that it should not be used by individuals under the age of 18.

They argued that his coach decided to swap the bottle used for testing after the positive test was revealed in order to create the argument of a tainted sample, but that the athlete actually used a substance that listed higenamine on the label.

Ultimately, the sole arbiter in the case accepted Lekic’s contention that he consumed a tainted supplement that did not have higenamine listed on the label based on evidence provided by Lekic’s coach.

The sole arbiter landed on a period of ineligibility of six months from the date of the original Bosnia & Herzegovina decision, which was October 26, 2021. The arbiter also disqualified all of his result from June 26, 2021 to July 10, 2021, meaning that he will forfeit his two European Junior Championship medals.

Lekic will also be stripped of several national records from the meet, and the honor of becoming his country’s first-ever swimmer to medal at the European Junior Swimming Championships. That honor now belongs to his countrymate Lana Pudar, who would medal later in the meet.

The changes also impacted the overall medals standings, including giving Norway its first medal since 2018.

Based on what I read in this article, someone should bare a fair amount of responsibility, either the swimmer, the coach, or the Doctor.
What other swimmers/athletes is this coach and doctor in charge of?