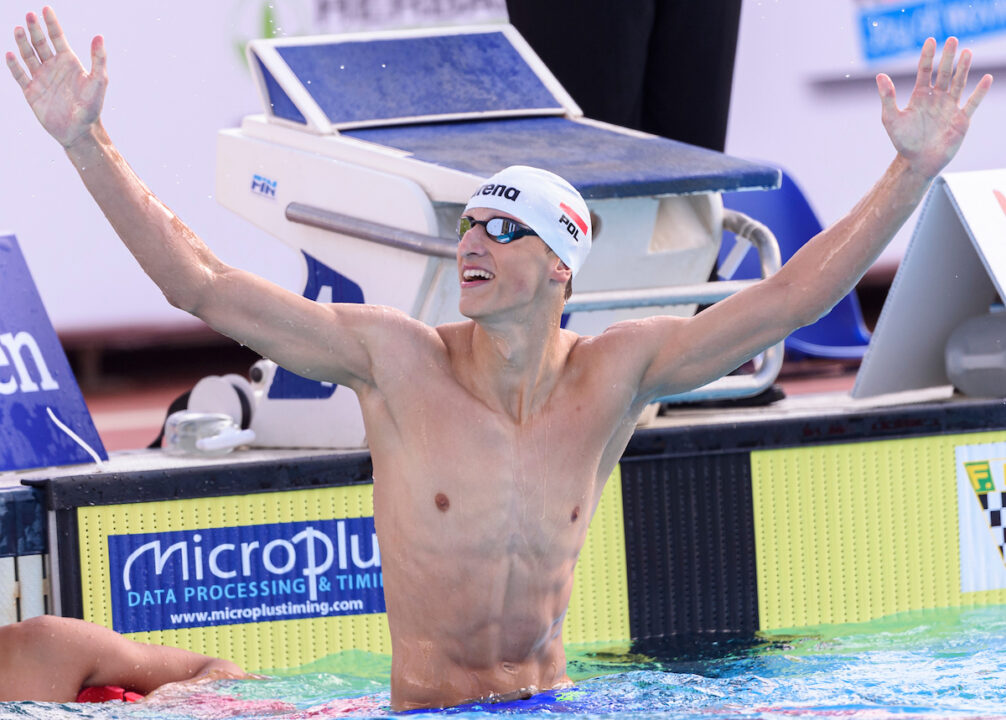 After winning the 50 back last night, Ksawery Masiuk of Poland swam the fastest time this morning in the boys 200 back. He is the defending champ in the event Archive photo via Giorgio Scala

So far through day 2, Poland and Hungary stand at the top of the medal table with five total medals for each country. Yesterday during day 2 finals, four swimmers defended their title from 2021.

Hungary continued its success into day three as Dora Molnar kicked things off in the girl’s 200 backstroke. Molnar swam a time of 2:10.78 to be first heading into semifinals. She was slightly off her best time of 2:09.34 which she swam in April at the Hungarian Championships.

Casper Puggaard of Denmark leads a tight pack in the boy’s 100 butterfly. Puggaard swam a personal best time of 53.17 this morning, one of six boys to be under the 54 mark. Behind him was France’s Yohan Airaud who swam a 53.50. Czech Republic’s Daniel Gracik (53.74) and Tobias Kern (53.94) are third and fourth heading into semifinals tonight respectively.

Defending champion in the boys 200 backstroke Ksawery Masiuk of Poland swam the fastest time this morning of 1:59.84 to be first heading into semifinals. He was the only boy under the 2:00 mark. Last year, he won the title in a 1:58.41.

Apostolos Siskos of Greece is second heading into semifinals after swimming a 2:00.25 this morning which was just ahead of Ukraine’s Oleksandr Zheltyakov who swam a 2:00.62.

Also being the top seed heading into semifinals after winning the title last year is France’s Justine Delmas who swam a 2:29.35 this morning in the girls 200 breaststroke. Last year she won in a 2:25.54, over two seconds ahead of the second place finisher.

The top 16 finishers in the boys 50 freestyle this morning were all separated by less than a second. Leading the way was Croatia’s Jere Hribar who swam a 22.32. His previous best time stood at a 22.80.

Behind Hribar was David Popovici of Romania who swam a 22.46. Popovici won the 100 and 200 freestyles at Worlds this past month but did not compete in the 50 free in Budapest. He is the defending champion in the event as he won in a 22.22 last summer. Third heading into tonight is Alexander Painter of Great Britain after swimming a 22.68 this morning.

Leading the way heading into semifinals of the boys 200 breaststroke will be George Smith of Great Britian after posting a 2:14.90 this morning, Smith finished just ahead of Luca Janssen of the Netherlands who was second in a 2:14.98. They were the only two under the 2:15 mark as third place finisher Luka Mladenovic of Austria swam a 2:15.33.