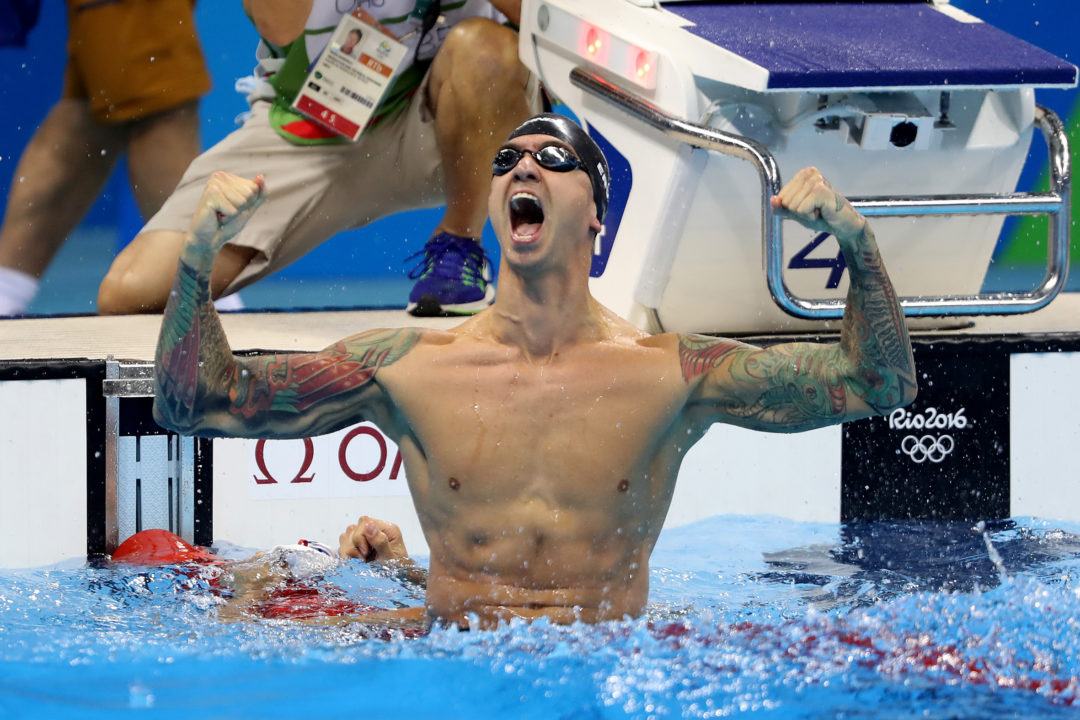 Anthony Ervin of the USA became the oldest swimmer to win an individual gold medal tonight with his victory in the 50 free, sixteen years after he won the same event in Sydney. Current photo via Simone Castrovillari

Anthony Ervin became the oldest Olympic swimmer to earn an individual gold medal tonight with his improbable victory in the 50 free.  Ervin, 35 years and 78 days old, takes over title from the most decorated Olympian ever, Michael Phelps, who earned that distinction with a victory in the 200 fly Tuesday night.  Phelps then extended that record by a few days with his gold in the 200 IM last night, giving him a gold at 31 years and 42 days old.

Tonight’s gold medalist has one of the most intriguing storylines in swimming history.  He was only 19 years old when he tied Gary Hall Jr. for gold in the same event in 2000, making Ervin the youngest Olympic champion in the 50 free.  After a couple more years of swimming, he dropped out of the sport, and essentially disappeared, only to reappear and renter the world of competitive swimming on the road to the London Olympics.  He qualified for the 2012 USA team in the 50 free, beating out, among others, Nathan Adrian, who joined him as a medalist tonight.  Ervin then placed 5th in this event London.

The man who won gold in London, Florent Manadou of France, looked likely to repeat heading into tonight.  But Ervin nailed his start, something had long been a visible weakness, and churned the water the rest of the length of the pool, touching out Manadou 21.40 to 21.41.  After yesterday’s semifinal, Ervin had said that he felt like he could go a little faster, and he surely did, as tonight’s swim represented a personal best for him, showing that even at what’s considered an “old age” in swimming, he is still improving.

Ervin has given no indication that he intends to retire, and he’s only 0.04 seconds off of the American Record, held by teammate Adrian, potentially giving Ervin yet another goal to work towards.  In fact, Ervin indicated later on in the evening that he would like to swim at the 2020 Olympics, when he’ll be 39 years old.

Ervin on what the medal means to him 16 years after he won his first gold:

“This medal means to me, the recognition, the immense gratitude for all the people that have supported me through the highs and the lows, always there for me, let me lean on them and I hope they can always lean on me if they need it. Most of them are beyond needing to lean on the likes on me.”

On winning the race:

“There were no guarantees but I was feeling good coming into the meet. I felt really good in the prelims, then I changed things for the semis, felt even better then I had a game plan for finals. If anything, I was a little bit slower than I thought I was going to be. But it’s a tough race, it’s the 50m final in the Olympics.”

Welp, I finally have something to replace my former favorite Olympic Swimming race of all time; the Sydney 50 free when Ervin tied with Hall. This is so unreal, you’d think you would only see this kind of amazing comeback in movies. Ervin will always be my favorite swimmer.

Incredible Win for Ervin – thank you for putting this off my bucket list !!! ErvinfortheWIN

I am so happy for this man and have believed all along that this was a definite possibilty. I screamed my brains out during that swim. Thanks for the show Tony. And oh yeah, Ervin smash!

The greatest freestyle sprinter that has ever lived. No more questions about it.

Popov would have questions about it

Sadly no, because the meet isn’t sanctioned as a Masters meet.

I swam at a Masters meet with him and Grevers. I guess you could technically say I ‘raced’ against both of them. I was in Heat 10 and they were in Heat 38, and they didn’t know I was there! But I can say this. Any Masters record they want — they will get!

Anthony Ervin is such a good comeback story