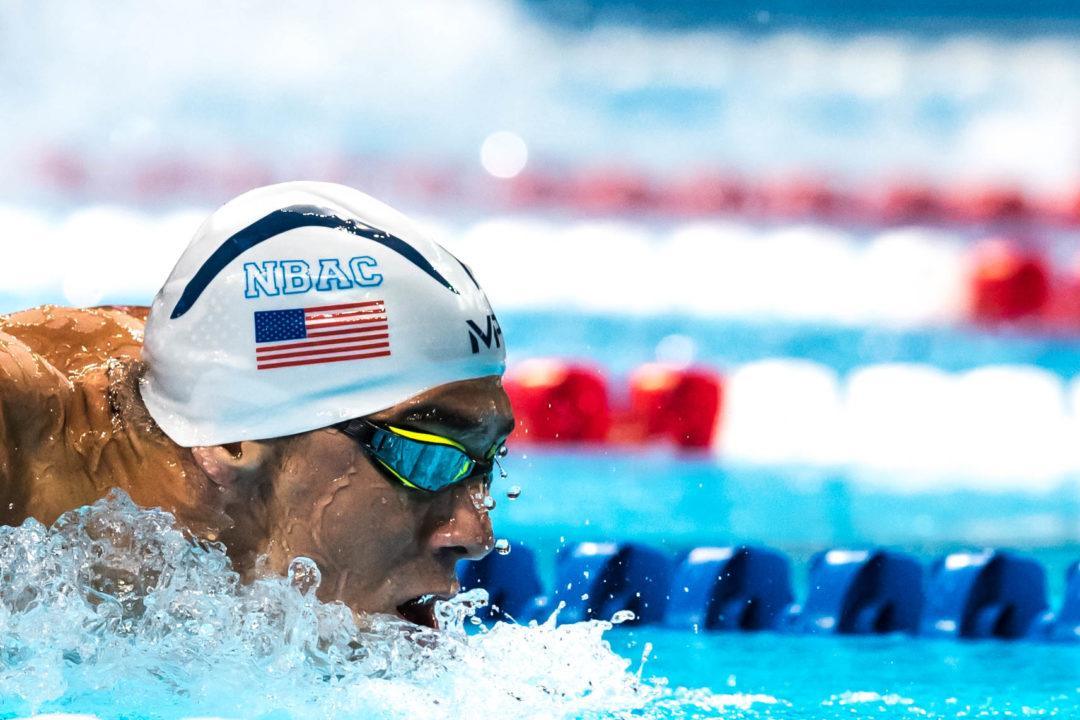 Among a career of dominant swims and a dominant 2008 Olympic Games performance, a year prior, in 2007, Phelps was possibly at his most dominant. Current photo via Mike Lewis/Ola Vista Photography

Despite his success at the 2008 Olympic Games, winning eight gold medals and breaking Mark Spitz’s record for most Olympic golds won in a single games, the year that Michael Phelps had in 2007 was arguable even more impressive.

Amidst the other record-breaking swims, the 200 IM stands out as one of Phelps’s most impressive. Going into the meet his best time, and the current world record, was nearly a second slower than what he swam, a 1:55.84 from the 2006 Pan Pacific Championships the year before.

In 2007, Phelps set the pace early, taking the 50 fly out in a 24.96, already .15 under World Record pace. At the 100 he had widened the gap between himself and the World Record to .91. After swimming nearly the same split on the breaststroke leg as he had the year prior (only .01 faster), he brought it home slightly slower on the final leg, finishing with a split of 27.51.

While his time has since fallen out of the top-10 all times swims, it still stands as the 11th fastest swim of all-time in the event. Of the top-10 times, 7 of them are Phelps’s, while the other three belong to fellow American teammate Ryan Lochte.

Looking at his swim in comparison to the previous World Record he had set in 2006, the biggest difference in his splits came in the backstroke leg of the race. In 2006 he was over half of a second slower (29.38) than he was in 2007 (28.62). While the rest of his splits were similar to the previous years swim, this drop was pivotal in him becoming the first man to dip below the 1:55 barrier.

Through the 5-year period where Phelps reset the World Record 7 times, he maintained similar splits while slowly lowering his time. Across the 5 year span, the largest change in splits came in his strength, the fly leg of the race, and arguably his weakest leg, the breaststroke. Both of those splits saw time drops of over half a second from 2003 to 2008, while his free leg was actually slightly slower in 2008.

Whilst this was no doubt a huge swim, such was Phelps’ awesomeness in 2007 that it probably ranks (at best) as his 3rd greatest swim.

The article is good but come on…Phelps is the ONLY swimmer in history with 4 consecutive titles in the olympics…how could you forget the 2004 gold medal????????

lol i will be the one arguing that phelps’ 2007 worlds was just plain in another stratosphere than Spitz in Munich. the 200 fly in melbourne was legitimately the most beautiful swim i have ever seen

That WR is made even more impressive because only 2 people have ever swam faster than that WR, the 1:52.0 from the Olympics by Phelps with the LZR legs, the 1:51.51 at Rome with the full body LZR, and then the 1:50.73 by Milak last year.

That is, in my opinion, his GOAT swim.

I do not disagree. Of note though, I believe he has gone on record and stated he believes his best ever swim was the 200 free in Beijing.

Yes, believe he called it “a perfect race”

He Fell broke his wrist about eight months out of the Olympics so imagine what he would have done if he was 100% healthy at the time of the 2008 Olympics.

Yes, but it’s hard to maintain that level from age 15 to 30. Agree with THE UNORIGINAL TIM, he did enough.