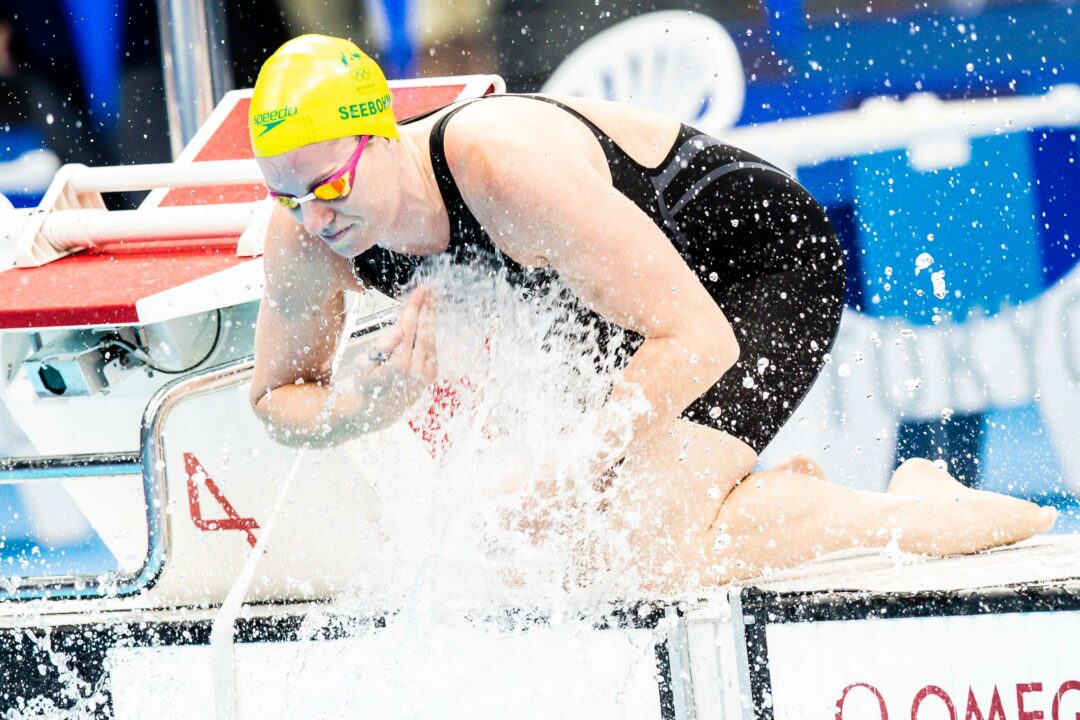 In her third reality TV show since the Tokyo Games, Emily Seebohm was featured as a cast member on MTV's "The Challenge: Australia". Archive photo via Jack Spitser/Spitser Photography

Olympic medalist Emily Seebohm has made an appearance on yet another reality TV show. This time, it is The Challenge: Australia, which aired in November of 2022.

This is Seebohm’s third reality TV show since the Tokyo 2020 Games. She first competed on the reality show I’m a Celebrity…Get Me Out of Here!, where she finished 4th. This summer she also made an appearance on the obstacle course challenge show Australia’s Ninja Warrior, where she ended up losing to singer-songwriter Jack Vidgen.

The Challenge is an MTV show that pits contestants, who typically are previous cast members from other reality TV shows, against one another in teams of two. The last-place team in each “Daily Challenge” is automatically sent to an elimination round against the winner’s team of choice. The winners of the elimination round move on, while the losers are out.

The challenges typically require both physical and mental effort, with some being almost entirely puzzle-based, while others include more physical activity and interaction with other competitors.

Seebohm, who was viewed as a physical threat in the game, ended up getting eliminated in episode 7 as the 12th contestant taken out. Troy Cullen, a Ninja Warrior alum, and Kiki Morris ended up winning the season, taking home $100,000 each in prize money.

Seebohm is also rumored to be among the cast members of the The Challenge: Global Championship, an all-star international version of the same show. The official cast list has not yet been released, but filming recently wrapped up in South Africa.

Seebohm, now 30, competed for Australia at four Olympic Games, beginning in 2008. She has won 7 total Olympic medals throughout her career, with three of those being Olympic relay gold medals. She is also a 5-time World Champion and 7-time Commonwealth Games champion. Seebohm has not competed since the Tokyo 2020 Olympic Games, where she earned an individual bronze medal in the 200 back and was part of Australia’s gold medal medley relay team.

Not officially but I suspect she’s done

I’m surprised Australian Pentathlon hasn’t tried to recruit her. She has equestrian experience and obviously swimming which are two of the hardest disciplines for most would-be pentathletes to master. Her natural athleticism and grit would get her far, and maybe on another Olympic team.

You also need to be able to run and shoot a laser pistol (a combined event) plus fence; the latter a discipline that trips most up.

She may be a keen horserider but in this event; you are not riding your own horse (with whom you’ve built up a trusting relationship) but rather a horse you’ve never ridden before.

Who knows what she may pursue in future but I suspect she may’ve hit the point of “enough” as regards pursuing an elite sporting career and the sacrifices that go with it; and is rather seeking to cash in on whatever profile she may have whilst it still has any “currency”.

Great to see swimmers in the public domain…they work so hard, they deserve a bit of fame and fortune!