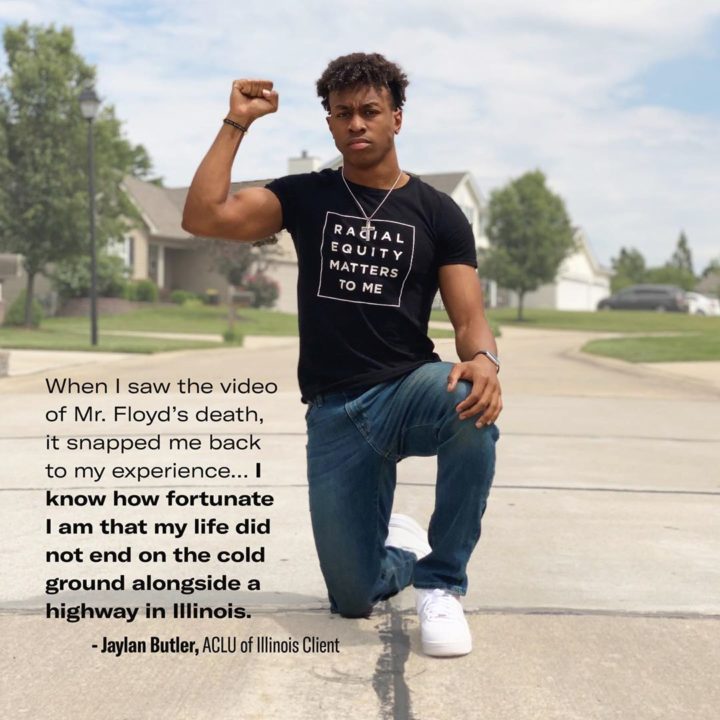 EIU swimmer Jaylan Butler was allegedly held at gunpoint by police last year as his swim team's bus was at an Illinois rest stop. Current photo via ACLU of Illinois

Eastern Illinois swimmer Jaylan Butler, taken down by police and allegedly held at gunpoint last year, says video of George Floyd‘s death brought him back to the harrowing 2019 incident that is still the subject of an ongoing lawsuit.

Floyd was a black man killed in Minneapolis last week when three policemen held him down and one, Derek Chauvin, pressed his knee on Floyd’s neck for nearly nine minutes. The four involved officers have been fired and Chauvin has been arrested and charged with third-degree murder and manslaughter. The killing – which was filmed and quickly went viral – has set off protests around the world over police mistreatment of racial minorities.

Butler is an EIU swimmer who was taken to the ground by police at an Illinois rest stop last year when police mistook Butler – the only black member of the swimming & diving team at the rest stop – for a suspect they were pursuing. You can read the full background of that case (with links to our previous reporting) below, but the ACLU has filed a lawsuit against six officers who are accused of holding Butler face down in the snow at gunpoint with a knee on his back and refusing to uncuff Butler even after they realized their mistake.

On social media last week, Butler noted the similarities between his 2019 incident and Floyd’s killing in 2020.

“When I saw the video of Mr. Floyd’s death, it snapped me back to my experience,” Butler said in an Instagram post by the ACLU of Illinois. “I know how fortunate I am that my life did not end on the cold ground alongside a highway in Illinois.”

Butler posted a longer message to his personal Instagram, saying he broke down in tears during a weight lifting session when he had a flashback to feeling a knee pressed into the back of his neck as officers detained him.

Butler was a freshman on the EIU swimming & diving team on February 24, 2019, when the team was returning home on a bus from the Summit League Championships in South Dakota. The bus stopped at a rest stop just inside the Illinois border, and police who say they were in pursuit of a shooting suspect spotted Butler (the only black member of the swimming & diving team) and ordered him to the ground. The team’s bus driver, who witnessed the incident, says Butler complied, but the officers held him on the ground with his face pressed into the snow. The bus driver says two cops were pointing guns at Butler, one of them saying “if you move, I’ll blow your [expletive] head off.”

When officers realized Butler was not the suspect they were pursuing, they refused to uncuff him, searched his pockets and left him handcuffed in the back of a squad car, claiming they were arresting him for resisting arrest. That’s according to a lawsuit filed by the ACLU that is still ongoing.

The police were from multiple different law enforcement agencies. As of this spring, four officers from the three departments named in the suit claim Butler resisted arrest, according to The Quad City Times. Per that report, the officers now deny that anyone placed a knee on Butler’s back while he was on the ground, though one county deputy had previously admitted to doing so. Officers have admitted that police kept Butler handcuffed even after realizing that he wasn’t the suspect they were pursuing, but deny telling Butler he was being arrested for resisting arrest.

Per The Quad City Times, the suspect the police were pursuing was 6-foot-6 and weighed 230 pounds. Butler is 5-foot-10 and weighed 160 pounds.

PTSD. So sorry this happened to you.

I have thought of Jaylan and his experience often since first reading about this horrific event. Even more-so this past week. Thank you for lending your voice, Jaylan. Thank you to the ACLU for supporting him. And thank you SwimSwam for amplifying this story.

I hope he wins this case and those cops are fired!