Editorial: Facilities Not a Deal-Breaker for Success in USA Swimming 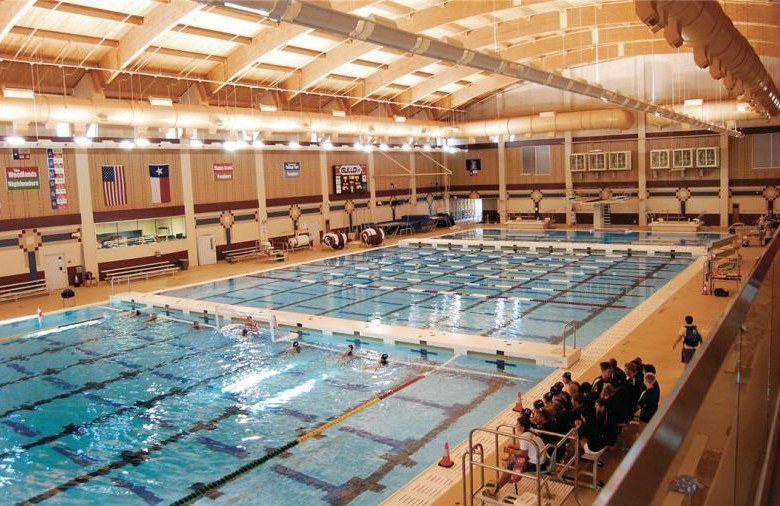 Justin Galbreath writes about the club that has bucked the trend of using mega-facilities for mega-success. (Photo above of the Conroe ISD Natatorium, home of gold medal club The Woodlands Swim Team)

Wonder when each of the top 8 US women’s 100 breaststrokers broke 1:00 in the SCY pool? Find out in this installment of Roadmaps!

Justin Galbreath’s sporting career began as a swimmer. Since 8 years old he has been in the pool.  He was given the opportunity to continue my swimming career into college where I attended West Virginia University and was a member of the team for 4 years, including the 2007 Big East Championship in the 1650 under Sergio Lopez.  Justin now focuses on training seriously for triathlons, and competed at the 2012 Ironman 70.3 World Championships. He keeps a blog about triathlons on his website jgalbreathtri.blogspot.com. His father, Gary Galbreath, is a coach of the Dayton Raiders.
I typically blog mostly about my triathlon stuff but this article, listing the USA Swimming “gold medal clubs” for 2013, caught my eye.

Let’s play a game of “which one doesn’t belong.”

Indoor/Outdoor facility, the kind of thing I’ve only dreamed of swimming in
3. Mission Viejo Nadadores

Can anyone that gets to swim outdoors in California really complain?
4. Nation’s Capital Swim Club

WOW! and a track next door, a triathlete’s dream.
6. Palo Alto Stanford Aquatics

Yes… that is two 50m pools right next to each other

This is one of two similar facilities

Just watch the video, I’ve seen a lot of things on YouTube that I didn’t think were real but this may top them all.

Swam here once and it is an awesome facility.

(It goes on like that for most of the gold medal clubs).

I guess I shouldn’t have named the game “which one doesn’t belong” because USA Swimming has tallied the scores (however it is that they do that) and these 10 programs came out with the highest totals, so all of them belong. This scoring decides the most successful programs throughout the United States.

My Dad is a coach for the Dayton Raiders, the #8 team on the list above. He posted the picture above of the facility in which his team practices. The facility is nothing special, I can say that because during a majority of my younger swimming years I swam in the same pool. The facility is a 6 lane 25 meter pool, the ventilation system no longer works, so the team depends on the four doorways to the outside and a giant fan, to top it off it is located in an area town that is not the best area.

It is a facility that is bad enough that it could be used as an excuse for the coaches and the swimmers. But having swum in this pool and having swum for my dad, I know “an excuse” is not what it is being used for. It is used to make the swimmers tougher.  I’m sure that the coaches and swimmers would love to have any of the other facilities that pictured above, but I don’t know if they would be the same swimmers or same team without swimming in that pool. Swimming is hugely mental, more so than a lot of people think. To be able to swim in their facility day-in and day-out takes a special toughness, one that can’t necessarily be learned or gained swimming outside in sunny California.

My freshman year of college I was part of a similar situation. I attended West Virginia University, coached by Sergio Lopez, who is currently the coach of the #5 team on this list, Bolles Sharks. WVU’s facility is an 8-lane 25 yard pool with a small separate diving well. As freshmen that year we didn’t even receive our own training equipment until almost halfway through the year. At the end of the 2006-2007 season, we had won the Big East Swimming Championship and were ranked in the NCAA top 25. The WVU facility is not nearly as bad as the Raiders, but in the college swimming world where teams are able to draw swimmers in using a fantastic facility, the situation is comparable. We were able to accomplish what we did because everyone, swimmers and coaches, had one goal in mind and we held each other to that goal.

I could recount that year in novel form, but I’ll spare everyone. I guess the moral of the story is that the facility doesn’t necessarily determine the fate of the program. In fact it can be used as an advantage. I want to congratulate the Dayton Raiders, coaches and swimmers, you have accomplished a lot more with a lot less and that took a special group of people. Continue whatever it is that you’re doing, and I’ll keep dropping in to get my ass kicked whenever I can.

PASA only uses the pool shown from 5:00-6:30 a.m., 3 mornings a week and on SOME Saturdays (mid day). Otherwise they swim at other pools. So not a good indicator (to make the story work though).

I agree with Coach – PASA uses summer league, high school and City pools in a variety of lane configurations and many different hours. We rent pool space where we can and create programs to fit in the hours we have available to us.

I actually thought the article was going to be about us!

Over the summer they don’t swim at any of the pools in the picture at all. They’re at high schools and country clubs around Palo Alto during that time of year.

I swam at LESD (in the 90s) and we trained in a really crappy pool. It was 5 lanes, no gutters, swallow and no ventilation (must be an Ohio thing). However, we produce great results, top ten at us nationals, had five swimmers get top 8 in the 1500 (3 girls, two boys) at one US Nationals and 4 in the top 8 in the 1500 at one Juniors (all girls). So, it is not the “pool” that makes a great club (it helps, but not always). I always thought that training in a crappy pool was better than training in a great top notch pool. If you can swim fast in a pool without gutters, then you are definitely… Read more »

That would be the Lake Erie Silver Dolphins, for those not from Ohio ;-).

Facility does not matter. The pool I swam in was bad (thank goodness they finally built a new one). The amazing thing I saw though was Fresno Pacific University under coach Pete Richardson and Patrick Ota. (I wish I had a picture) A dorm pool built with the intention of never having a competitive team in the 80’s. I believe it was 5 lanes. One side at 3 ft and the other side varied depth. 3 blocks with only 3 lanes deep enough to dive. The length of the pool was around 23 yards. In three years of the program they became NAIA National Champions. Nice facilities are great, but definitely not the only factor.