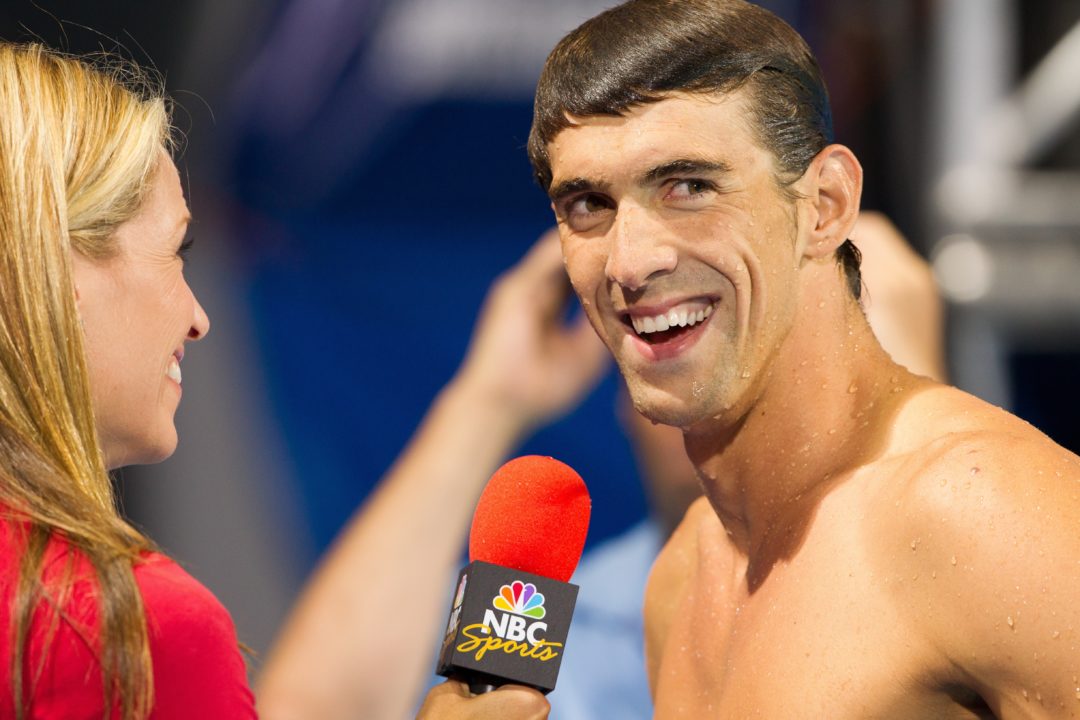 Michael Phelps has another honor for his trophy case, one dating back to 1931. (Photo Courtesy: ©Tim Binning/TheSwimPictures.com)

Michael Phelps is up for seemingly a googol of awards this winter as he makes his farewell tour: Sports Illustrated Athlete of the Year, USA Swimming Swimmer of the Year, Laureus Sports Award, Time Magazine’s Person of the Year.

The votes are finally beginning to roll in, and while he was short in Time’s opinion (no surprise as President Obama won it in an election year), the AP honored him today with their Male Athlete of the Year Award.

This is quite a rare feat indeed as Phelps beat-out Lebron James in the voting. James is one of the most popular athletes on the planet right now and is coming off of a season where he won his first ever NBA title (basketball).

Phelps, however, with 4 gold medals and 2 silvers, along with a body of work that makes him the most decorated Olympian of all-time, just got the edge with 40 votes to James’ 37. The third-place finisher was Usain Bolt: one of the men with whom Phelps is vying for several awards. Interestingly, after the 2008 Olympics, Phelps won this award and Bolt still took the Laureaus award.

The only other Olympic-sport athlete to capture this award more than once is track star Carl Lewis, who won in 1983 and 1984.Phelps also won in 2008, and the last two winners have both been football players.

This is one of the biggest sports awards that can be earned based simply on the longevity (though it is a very American-centric honor, generally). It’s been handed out every year since 1931.

The 2012 women’s AP Athlete of the year award went to gymnast Gabby Douglas, winner of gold medals in both the individual all-around and the team events at the Olympics.

All-time?Too much of a stretch…I can put some names in the list, like Pele, Michael Jordan…even in swimming, i will put Phelps as the best in modern age.A guy like Johnny Weissmuller who was a beast beyond his time, can t be left out.I still found amazing the fact he never lost a freestyle race.Amazing.

It is amazing Weissmuller never lost a race & set 60+ WRs over his career.

Setting over 60WR on a sport you can´t really be sure to break the WR for a small margin to get more and more is amazing.. But I would also add to one of the greatest of all time the amazing Sergey Bubka..

35 World Records, being not the WR holder for just a few minutes in all his career.. He was so far ahead everyone.. his WR is not near what he could REALLY have done.. he just went for the major meets.. broke the WR in 1cm.. and stopped.. His 6.14 is still 9cm better than anyone else in history.. and if he wanted 6.20 or 6.30 would be possible only for him..

Ddias, on another note I actually wrote a 10 page paper (in which I got an A) in my writing class arguing how Phelps is the greatest athlete of all time. maybe I’ll present it to you one day.

congrats on the A