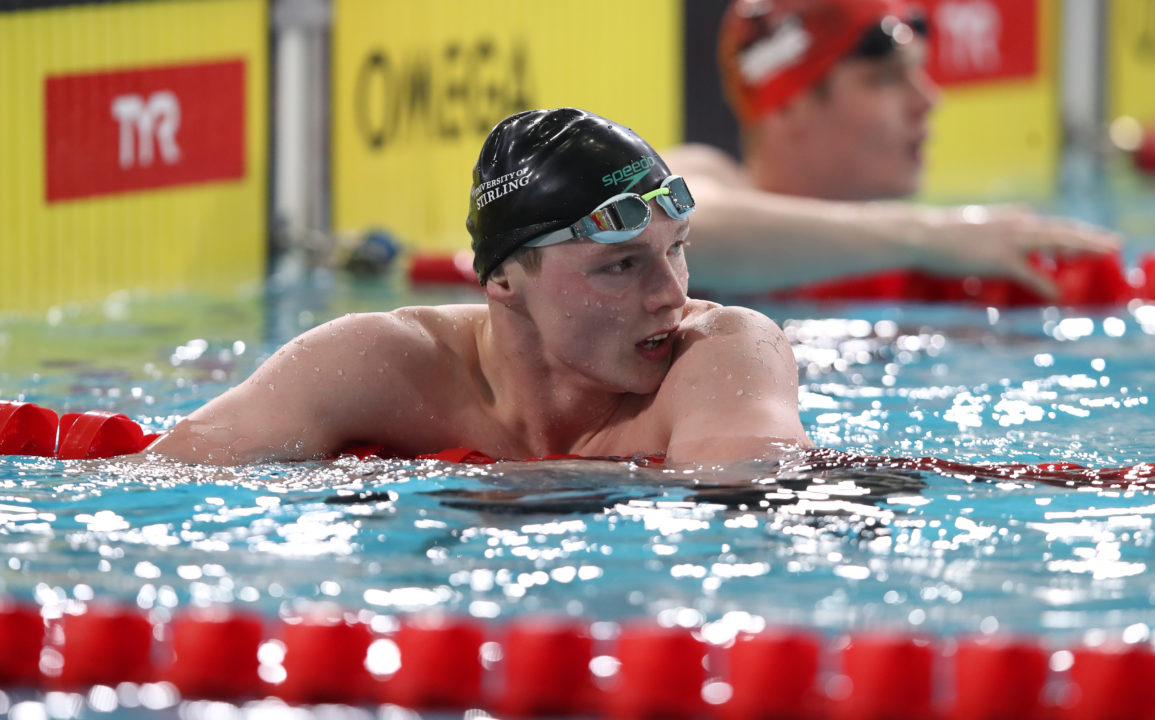 The British Swimming contingency put on a show in Edinburgh over the weekend, with Duncan Scott, Freya Anderson, Jacob Peters & more closing it out in style. Archive photo via Ian MacNicol for Scottish Swimming

Adam Peaty threw down a monster 58.13 last night in the men’s 100m breast and followed that up with a 50m breaststroke tonight in 27.14 for another gold. Peaty was quicker in the morning, establishing himself as the top-seeded swimmer in 26.86, a mark just .03 outside the 26.83 he posted at the McCullagh International.

Tonight, he led a quartet of Olympic-caliber swimmers with a final time of 27.14, with Ross Murdoch touching in 27.54 for runner-up status. Bronze went to James Wilby in 27.71 after he won silver behind Peaty last night in the 100m, while Stirling’s Craig Benson was also under 28 seconds in 27.85.

The women’s 50m fly was exciting as well, with Laura Stephens of Plymouth Leander putting up a lifetime best in the sprint. Stephens wowed the Edinburgh crowd on night 1 by crushing a lifetime best 200m fly time of 2:07.62. She also claimed bronze in the 100m fly last night.

This evening, Stephens touched the wall in 26.83 to represent the only sub-27 competitor of the field. Her time sliced .06 off of her previous PB of 26.89 registered just in February this year at the FFN Golden Tour in Nice.

Former national record holder of the women’s 200m breast, Molly Renshaw, logged a near season-best en route to topping the podium in the race this evening. After claiming the 2nd seed behind current British record holder Jocelyn Ulyett, Renshaw surged to the wall by a super slim margin of just .04 to take gold in 2:25.84 to Ulyett’s 2:25.88.

Renshaw has been as quick as 2:25.31 from the Northampton Winter Meet in December, while Ulyett’s outing tonight represents her season-best.

Nearing a lifetime best in the women’s 200m IM was Loughborough racer Abbie Wood, with the 20-year-old knocking down the gold in 2:11.78. Winning the race by over 4 seconds, Wood’s time from tonight sits just .13 shy of her 2:11.65 PB she produced at the 2019 British Championships.

Wood was a triple gold medalist at this year’s BUCS Long Course Championships, winning this 200m IM, the 400m IM and 200m free.

Versatile Duncan Scott followed up his 50m free victory in a new Scottish national record of 22.21 from last night with a strong 48.49 performance in this men’s 100m free.

He’s already been as fast as 48.53 as Stirling’s lead-off at this year’s BUCS Long Course Championships, so tonight’s effort checks-in as his season-best. Splits for Scott included 23.19/25.30 to give the 24-year-old his fastest ever non-championships time.

Scott’s 48.49 now ranks the Olympian as 12th fastest in the world this season.

Dean entered this meet with a lifetime best of 3:52.59 in this longer event, a time he posted on the 2019 Mare Nostrum Tour.

Tonight, however, Dean entered new territory, logging the first sub-3:50 time of his young career. The 19-year-old powered his way to the wall in a winning effort of 3:48.59, enough to hold off a charging Daniel Jervis who touched less than half a second later in 3:48.96.

Freya Anderson rocked a winning time of 53.93 to win the women’s 100m free, capturing a trifecta of sprint free titles with her 50m and 200m victories from earlier in the meet.

Tonight she split 26.26/27.67 to produce the 10th fastest time of her career. She owns a lifetime best of 53.31 from the 2019 FINA World Aquatic Championships, a time which renders the Ellesmere Titan as Great Britain’s 3rd fastest woman all-time.

James Guy established two new lifetime in-season bests at this meet already in the 200m free (1:46.79 for silver) and 200m fly (1:56.62 for gold). This morning, the national record holder posted a morning effort of 51.84 to claim the top seed in the 100m fly before dropping the final.

Splitting 24.07/27.77, Guy hit the only sub-52 second time of the field, most likely tredating the morning outing as a final.

In Guy’s stead, Poole’s Jacob Peters snagged the gold in a time of 52.19, beating the field by almost 2 seconds in the process. Peters dropped over 1 1/2 seconds from his morning swim to post the fastest time of his young career.

Entering this meet, Peters held a career-quickest of 52.47, a time which rendered him as the 10th fastest Brit all-time. However, with his 52.19 time this evening, the relay gold medalist from the 2018 European Championships now checks-in as GBR’s 6th fastest swimmer ever in this event.

Emma Russell’s Scottish age group record (55.8) in the 100 freestyle is worth noting. 100 fly suddenly looks an event to look forward to; Peters still only 19, so 52.1 in March is not too shabby, and of course 16yo Ed Mildred chopped over a second off his PB to get touched out by Scott a few weeks ago in Bangor. James will welcome the domestic competition I’m sure.

are you saying he gets 30 seconds rest between 50s? There is no way he can hold that pace…that’s beyond Dressel endurance

He swims a 50, gets out, another 50 happens while they’re walking back (womens fly), then they swim another 50 breast, this goes on until both events are down to the final 2 swimmers. Pretty relentless skins system; The lad in the 50 back skins final yesterday looked broken. Worth remembering he can swim 30.2 on the back end of a 100 breast after splittint 26.6 at 50, so it isn’t *that* shocking in the realm of Peaty.

That still seems almost impossible to believe. With that kind of endurance, we need to see him swim the 200. He went a 1:49 200 breast in 3 minutes and 27 seconds while walking around to the other side of the pool three times! And this is when he’s 1.2 seconds away from his best in the 100!

There was talk about ‘project 2.05’ a couple years ago, but he changed his mind after the 2018 commonwealth games when he planned on swimming the 200 but scratched after a poor 100.

Broken 50s are not 200s especially not Breastroke. Look at Chupov’s stroke and look at Peatys. Peaty can do a very respectable 200 but he will not be the guy to do 2:05 or challenge for gold medals. If he could he would.

Not quite. If you watch the clock on the live stream you can see that these were set off on 3min intervals. So he gets about 2:30 between races. Obviously still mighty impressive.

RIGHT. As I continue my (probably pointless) campaign for a women’s 4×100 freestyle team making it to Tokyo I see Lucy Hope may be solidifying as a sub 55 second swimmer? The British qualifying time for the relay is 3:35.64 but relay splits from 2019 world champs can be used. So Hopkin (52.65-omg just send a relay team so I can see her split at the Olympics) and Anderson (52.98). So that leaves about 110 seconds for the 3rd and 4th to make up? Assuming Hope goes 54.7ish that means we need a 55.3 from someone. Assuming SMOC doesn’t swim it, where we see this coming from? Coates? Or a young gun dropping a load of time? Anyways this is… Read more »

Isabella Hindley swam 55.21 in the US a couple weeks ago. Heard good things about Tam Van Selm too; Expect good things from her this summer.

That would make a super 4 x 100. Let’s go with Anderson, Hope, Hopkin and SMOC it would be great for young swimmers to see