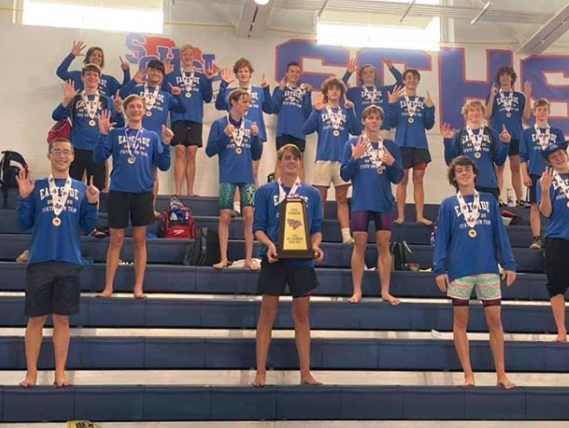 Schools competing in the SCHSL’s 4A division fall between the 3A and 5A schools in terms of size under the reclassification that was based on enrollment numbers as of mid-2019.

The defending state champions, Eastside managed to come out of the meet with the win, scoring a total of 511 points. This marks Eastside’s 6th consecutive State Championship title on the men’s side. Notably, Eastside was the only school to win both the boy’s and girl’s titles across all three divisions at this year’s meet.

In the 200 medley relay, Eastside finished second behind AC Flora. The Eastside team, consisting of Joseph Lilley, Nils Bognar, Carson Mozingo, and McLain Brown touched in a time of 1:40.17.

AC Flora’s foursome of Tanner Edwards, Darden Tate, Benjamin Tanner, and Hill Teas managed to touch first in a time of 1:37.27. On the opening backstroke leg, Edwards posted a split of 22.83, which was the fastest backstroke time in the entire field by almost 4 seconds. His split was also the second-fastest in the entire field regardless of stroke.

Edwards also showed off his backstroke later in the meet, swimming a time of 49.42 in the 100 backstroke. This broke his own meet record (49.79) that he set during last year’s meet.

In the 100 butterfly, Edwards broke another meet record. Touching the wall in a time of 49.72, Edwards took down the meet record set by Jordan Berry in 2008. (Although Harrison Clinton would again lower the record at the 5A meet later in the day, swimming a time of 49.41.)

Congratulations to 14 year old Daniel Schwabauer on the 50 free win and the 100 free runner up! First state champion coming out of Bluffton.
Also of note, that Lucy Beckham team is a brand new school with no upperclassmen. Love to see what they can do in the future!