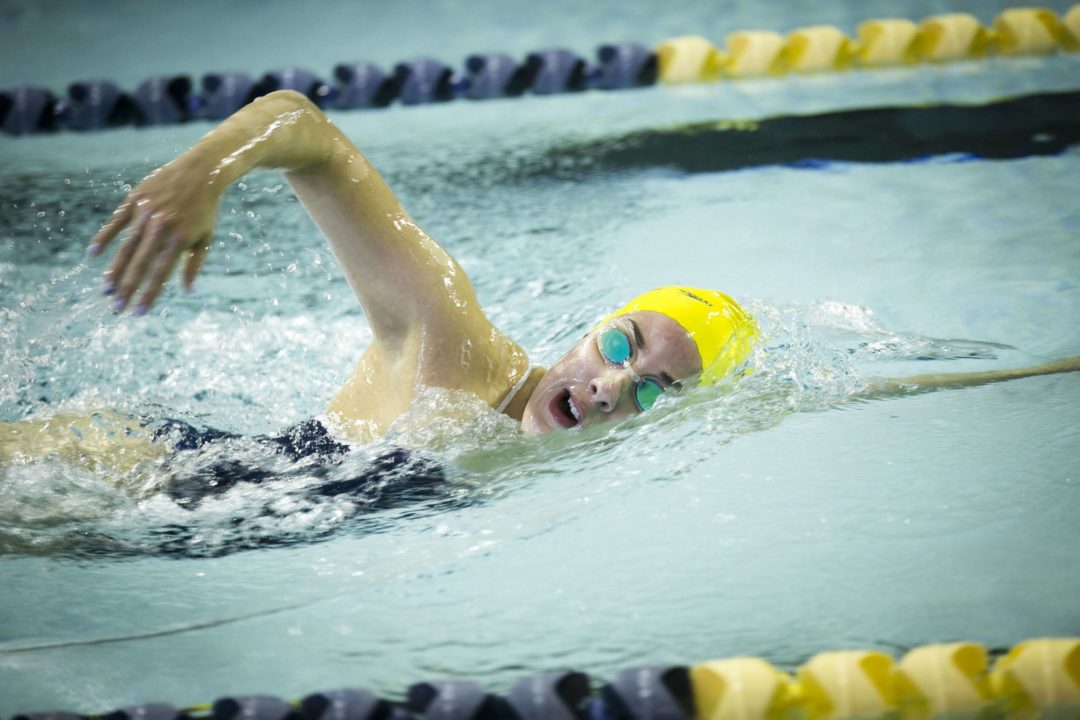 On Saturday afternoon, the men and women of Emory's Swimming & Diving program faced off against Division I competition in the form of the University of Alabama at the Don Gambril Olympic Pool in Tuscaloosa, Alabama. The Crimson Tide beat both the Eagles on both sides, taking the victory 196-92 over the men, and 178-110 over the women. Current photo via Emory Athletics

On Saturday afternoon, the men and women of Emory’s Swimming & Diving program faced off against Division I competition in the form of the University of Alabama at the Don Gambril Olympic Pool in Tuscaloosa, Alabama. The Crimson Tide beat both the Eagles on both sides, taking the victory 196-92 over the men, and 178-110 over the women.

During the course of the meet, the Eagles secured four event titles and put ten NCAA B cuts up on the board.

For the Eagles’ women, they had three individuals on board who turned out event wins. Annelise Kowalsky captured the 100 breaststroke with a B cut (1:04.29), McKenna Newsum-Schoenberg was the winner in the 1000 freestyle (10:21.36) and Nancy Larson spirited away the win in the 100 freestyle (52.97). The other provisional cut times mostly came as second, third and fourth place finishes from the Eagles.

The women also managed to put up B cuts on both relays. Thompson, Kowalsky, Marcela Sanchez-Aizcorbe and Larson touched third in the 400 medley relay with a time of 3:47.97 – a good bit faster than the 3:53.4 cut time. In the 400 freestyle relay, the team of Claire Liu, Marissa Bergh, Dana Holt and Larson put together a 3:31.40, good for a second place finish.

For the Crimson Tide women, besides just winning 13 out of the 16 events contested that day, they also had a senior make the most of senior day by putting her name up on the record board. Paige McCleary took down two school records in one and three meter diving. On one meter, she posted 325.88 to break a record set in 2004 by Lane Bassham. On three meter, McCleary scored 377.70 to crack Carrie Dragland’s record set in 2012.

In addition to it being senior day for the Crimson Tide, the meet also doubled as a breast cancer awareness initiative, dubbed the Power of Pink.

On the men’s side of the meet, the only Eagle to take home an individual event win was Jared Schuer who claimed the 200 backstroke win in a time of 1:54.39, a little over a second away from a B cut time. Other teammates recorded B cuts during the meet, however. Andrew Wilson placed second in the 100 breast with a 57.07 to secure a B cut time, and joined the 400 medley relay (a team including Ross Spock, Hayden Baker, Jake Stephens) to take second with a 3:20.44 – just about four seconds under the provisional qualification time.

For complete meet results, click here. The Eagles will have their final dual meet on Saturday, Feb 1, when they host the University of the South at 1pm.