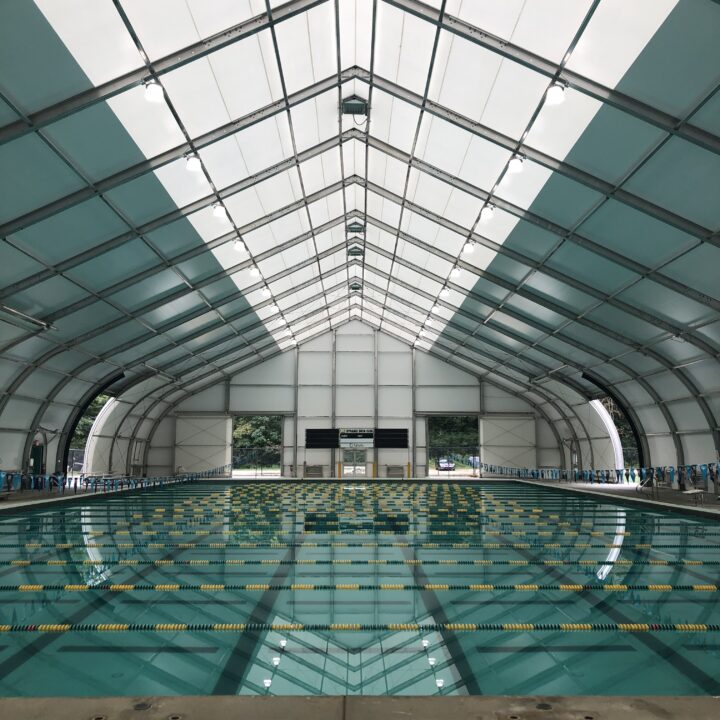 Dynamo was able to hold a reopening ceremony on May 3rd to dedicate the renovation project on their 50m pool in Chamblee to their late head coach Turcotte. Current photo via Ian Murray

The eight-lane, 50-meter by 25-yard pool at the main Dynamo location in Chamblee, Georgia has a depth ranging from seven to eight feet. It had a structure above it to protect from the weather which stood for more than 20 years and was in need of replacement.

The new structure or “shell” is partially translucent to help limit the use of all-day lighting and the light fixtures have been switched to LED lights. The Sprung structure was both the less expensive and more energy-conscious choice, over the brick and mortar option. The ceilings are 46 feet tall, slightly taller than the previous structure.

“It allowed us to kind of replicate the old feel of the previous structure where it was really open,” Dynamo head coach Ian Murray told SwimSwam over the phone. “And you could open all the doors and there was lots of fresh air … And obviously, it helps us from an energy standpoint as well.”

The renovation also gave Dynamo more usable deck space, allowing them to house more spectators and add dryland space. They also improved the ventilation system with 6 exhaust fans and 12 ground-level louvers so that it can filter the entirety of the air in the building in about 15 minutes when the facility is sealed.

There are also nine large sliding doors (14’ by 16’) that are kept open as long as the weather permits it.

Dynamo has been practicing in the pool since October when construction officially finished. Due to the coronavirus pandemic, they were unable to hold a reopening ceremony or even allow parents or spectators in during practice.

The 50-meter pool was the second part of Jason Turcotte’s vision. The first portion of the renovation was finished in 2015 with the addition of new locker rooms, a weight room, a turf field, a multisport room, a conference room, and staff offices to the main Dynamo facility in Chamblee. The cost was also approximately $1.5 million.

Turcotte had the idea to renovate the Dynamo facilities more than six years ago. He started coaching for Dynamo in 2006 and in 2017, 19 of his 15 & Over athletes reached Georgia Swimming’s Top Ten list.

This pool renovation, which the team refers to as Project JT, completes his vision.

“Jason was a giant at Dynamo. The 11 years that he spent here were certainly some of the most successful this program has ever seen with multiple Olympians, multiple national team members. So there was the, you know, obviously, the excitement around the performance side that he was able to produce, but also just his vision for what Dynamo was, and how we wanted to increase the scope of what they do, which included things like the addition on to the original building as well as now redoing the shell over the 50-meter pool

“We grew our Alpharetta facility under Jason, back in 2010, as well, so just as a vision for the growth of Dynamo, the impact in the community and it was going to have, I think we’re really just the catalysts for, you know, the performance success that the club had had during his tenure here.”

Turcotte was posthumously inducted into the Georgia Swimming Hall of Fame in 2018 for the legacy he left on the swimming community. Four Dynamo team members competed at the 2016 Olympic and Paralympic Games: Gunnar Bentz,  Jay Litherland, Matias Koski and McClain Hermes.

Turcotte died unexpectedly in 2017. Shortly after his death, Jay Litherland paid tribute to Turcotte and Dynamo for all they’ve done for him and his brothers Mick and Kevin during a post-race interview.

“I’m really proud that we got it done in the middle of a global pandemic,” Murray said about the renovation. “I mean, we were fortunate that most of the money was in place before we broke ground. And it was a tough call to say, ‘Hey, we’re gonna go ahead and push through reconstruction especially, I think, when we made the decision to go ahead, we actually weren’t open for business.

“So the fact that we were able to get back in the water and successfully complete this project, honor Jason with it … we’re incredibly grateful to obviously the donors and the people who helped make this project a reality through their financial support and, and equally through are equally grateful for our families and Dynamo who were patient with us and, and supportive during the construction and all of the headaches that abroad.”

“We love the pool. We’re excited about it.”

At the reopening on May 3rd, they also held a silent auction that raised $26,000 for Dynamo in honor of Turcotte.

Thanks for covering the pool re-opening. A few corrections from someone who trains there: the pool reopened last September and it is 50m x 25 yards.