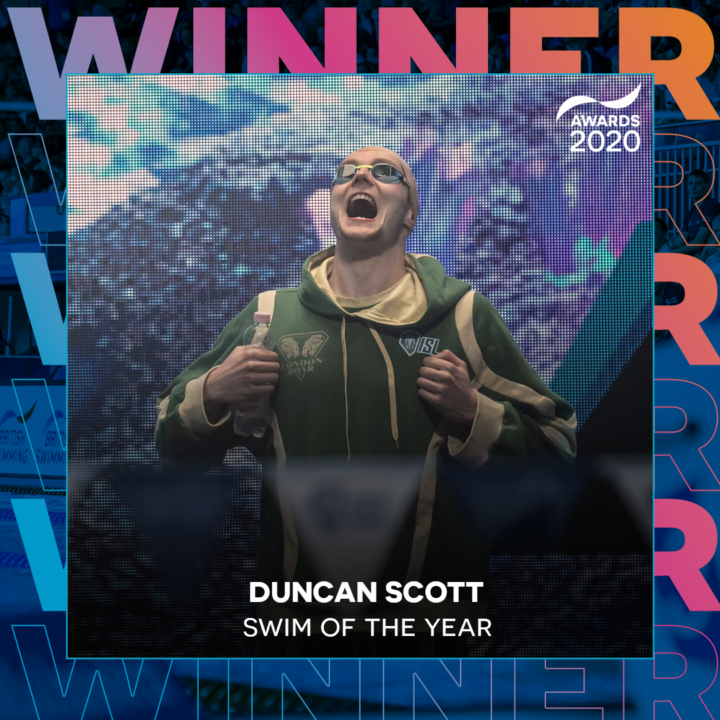 On the heels of being named the British Universities & Colleges (BUCS) Sportsman of the Year, 23-year-old Duncan Scott was awarded ‘Swim of the Year’ by British Swimming.

Scott was one of several aquatic stars who have been recognized virtually by British Swimming, with this year’s edition of the annual ceremony replaced by online voting. Tabulated across the organization’s website and social media channels, 8 awards were given in total.

For Scott, his British record-breaking 200m freestyle representing London Roar on day 2 of the International Swimming League (ISL) final sealed his Swim of the Year deal. His time of 1:40.24 destroyed his previous national record.

Fellow British freestyle ace Alice Dearing snagged the Championing Diversity award, with the 23-year-old being recognized for ’embodying the values of aquatic disciplines being sport for all’ by co-founding the Black Swimming Association earlier this year.

The BSA is an organisation focused on increasing the participation of people from BAME communities across aquatic sports, in partnership with Swim England.

Below is the entire list of winners from this year’s unique virtual celebration.

In aid of our NHS Heroes – Rhys Davies

Dive of the year – Andrea Spendolini-Sirieix

Swim of the year – Duncan Scott

Fuel my Friday of the year – Alys Thomas

I’m glad for Duncan because that swim was sensational! Does anyone know what the selection criteria are? It seems a little but surprising that a world record didn’t get the nod!

It was a public vote

y’all know this is was a joke about rowdy right?