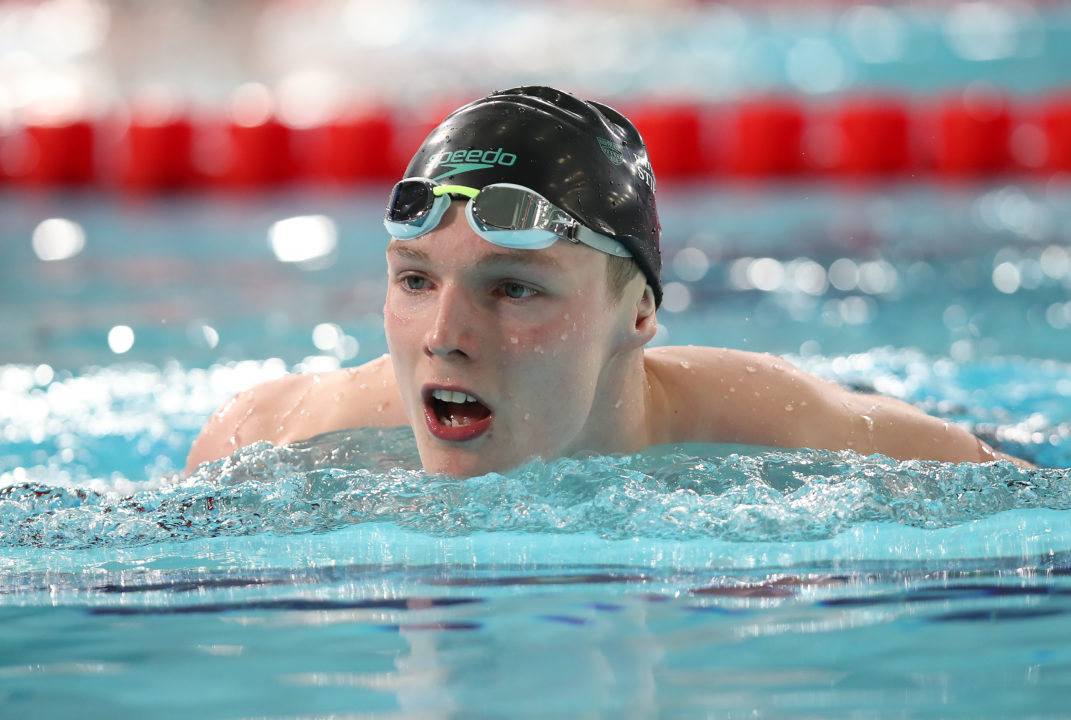 Scotland's most decorated Commonwealth Games athlete ever, Duncan Scott, is well on his way to making a huge mark on these European SC Championships. Archive photo via Ian MacNicol for Scottish Swimming

First, in the 200m free, Scott punched a time of 1:40.92 to claim the top seed and hold a 1+ second advantage over the next-closest swimmer Mikhail Vekovishchev of Russia. Vekovishchev notched a morning effort of 1:42.52, just .05 faster than fellow Briton James Guy. Last night’s 400m free Championships Record-setter Danas Rapsys Lithuania is also in the mix for tonight with an AM result of 1:42.78.

Scott’s time this morning checks-in not only as a personal best in the SCM edition of the event, but it also dethrones Guy as the British national record holder. Guy’s previous national standard stood at the 1:42.22 he put up in 2016, meaning Scott hacked a huge chunk of time off that mark, as well as his own previous PB of 1:42.47, en route to the top seed.

Splits for Scott’s swim include 49.20/51.72 to produce that massive morning swim. He now becomes the 8th fastest swimmer worldwide on the all-time performers’ list.

Also impressive for Scotland’s most decorated Commonwealth Games athlete ever is the fact that the man then also downed the Scottish national record in the 400m IM later in the session, clocking a massive lifetime best of 4:01.20.

Scott’s personal best in this event just a month ago was represented by the 4:06.00 he logged at November’s British Universities & Colleges (BUCS) Championships, one of more than 15 races the Scot threw down over the course of the 3-day meet. Later that same month, the University of Stirling weapon dropped that PB down to 4:04.55 to become Great Britain’s 5th fastest performer of all-time.

This morning, however, Scott entered entirely new territory with his 4:01.20, setting a new Scottish standard, as well as coming within a second of Max Litchfield‘s 4:00.18 British Record. It will indeed be a battle between the 2 Brits, with Litchfield holding on to the 2nd seed in 4:02.34.

British Swimming quotes Scott as saying of his swims so far today, “I’m treating the heats here like finals, so I’m all in in the mornings and I’m trying to really challenge myself. I knew this was going to be a tough double going all-in on both of them, but it’s going to be even tougher next year [at the Olympic Games], so it was a tough turnaround but I’m delighted with both of those swims.

“I came here to challenge myself and expose myself under immense fatigue and see what happens. Am I poor off the wall? How does my technique deal with it? This is exactly what I wanted to get out of it, but I’m hurting now!”

he has withdrawn the 400IM looking at startlist

And once again, while we admire this formidable swimmer, we are reminded of how just great Yannick Agnel was

Looks like Biedermans record was 2009, was that after the suit ban?

Rule of thumb: If you ever see a Biedermann time in an article, you can assume it was in a supersuit.

It was in a super-suit, just a few weeks before the ban. It was in November 2009.