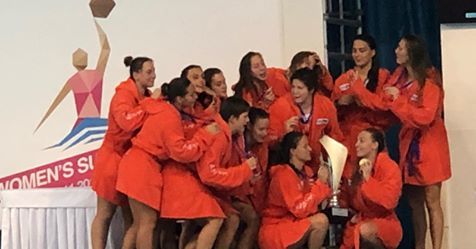 Hungary’s Dunaujvaros wrote history by clinching the women’s European Super Cup for the first time after a stunning shootout win in Kirishi. The LEN Trophy winner side came from four goals down to beat the favorite Russian team in its home pool. Current photo via LEN Media

Hungary’s Dunaujvaros wrote history by clinching the women’s European Super Cup for the first time after a stunning shootout win in Kirishi. The LEN Trophy winner side came from four goals down to beat the favorite Russian team in its home pool.

Deep into the third period Kirishi, back-to-back Euro League winner in 2017 and 2018, sat comfortable in the driving seat. The Russians led 10-6 with only 53 seconds remaining from the third and nothing seemed to prevent them from clinching their fourth trophy in a row (between the two EL wins they claimed the 2017 Super Cup as well).

After some balanced minutes, the Russians started rolling as the game headed to halftime, managed to take a 5-3 lead and extended the gap in the third to four goals. The Hungarians pulled one back before the last break but Kirishi was still 11-8 up with 5:19 to go. However, the underdog side went for all-in and with some tremendous defending they shut out the home team for the remaining time. A double in 77 seconds set them to force a shootout at 11-10 and after killing a man-down, Vanda Valyi put away their 6 on 5 with 57 seconds from time for 11-11, so indeed the penalties decided the outcome.

And in the shootout the LEN Trophy winners used their psychological advantage, their European champion Dutch goalie, Laura Aarts stopped two shots while the Hungarians buried 4/4 to secure their first Super Cup win in history. Kirishi retained its Euro League title back in April with a shootout win over Sabadell, this time luck didn’t favor the Russians – thus Dunaujvaros managed to become the first LEN Trophy winner to claim the Super Cup after Recco (ITA) had beat Sabadell in 2011. Also, this is the first Hungarian victory since the very first edition saw Honved (HUN) downing Orizzonte (ITA) in 2006.

The men’s final will take place on 30 November where also a Hungarian side, Ferencvaros aims to hunt down the Champions League winner Olympiacos Piraeus (GRE) in Budapest.

In Kirishi, the draw for the Euro League preliminary round was conducted. Here are the groups:

Group A to be played in Barcelona (ESP)

Group B to be played in KOSICE (SVK)

Group C to be played in Padova (ITA)

Group D to be played in Athens (GRE)