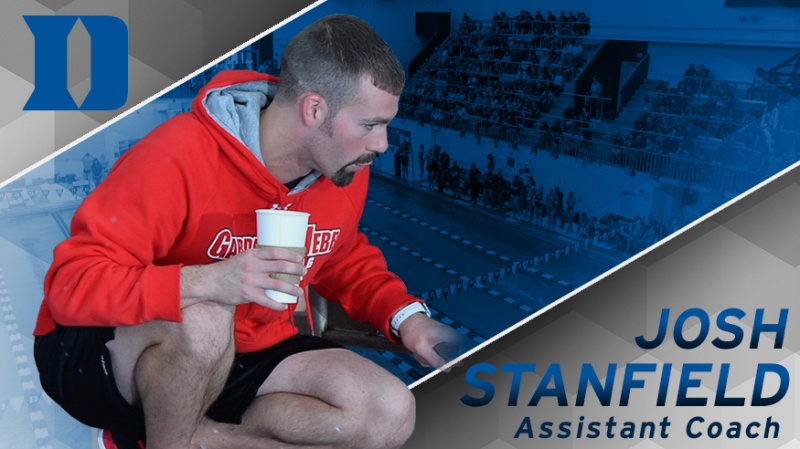 Stanfield spent the last 6 seasons at Gardner-Webb, including as associate head coach in 2018. Archive photo via Duke Athletics

Duke University in Durham, North Carolina has announced the addition of Josh Stanfield to the Blue Devil coaching staff. Stanfield comes to the program from Gardner-Webb, which will be rebuilding its staff after the departure of long-time head coach Mike Simpson, who had been with the program since its inception in 1999. Simpson took a job as an assistant at South Carolina earlier this week.

Stanfield had been with the Gardner-Webb program as one of two paid assistants for 6 seasons, including promotion to associate head coach for 2017-2018.

Stanfield fills the vacancy left when Niko Fantakis left Duke in June to become an assistant with the women’s team at Brown University.

In his last season with Gardner-Webb, the team won 3 CCSA titles and 5 NCAA “B” cuts.

Prior stops for Stanfield include at his alma mater Southwestern University in Georgetown, Texas, and as an age group coach at Nitro Swimming in Austin, Texas. Stanfield graduated from Southwestern in 2011.

The Duke women finished 6th out of 12 teams at last year’s ACC Championships while the Duke men took 7th out of 12 teams. Both teams scored at the 2018 NCAA Championships. The women sent 7 swimmers and placed 42nd at the meet with 3 points, including a 15th-place finish from senior Leah Goldman in the 100 fly; the men sent a pair of divers, who scored 9 points for a 33rd-place team finish.

Didn’t want to take over Gardner-Webb?

Commentor on the Mike Simpson story insuinated this happened before SC hired Mike.

Duke is getting an excellent package with Coach Josh Stanfield. He is one of the most intentional, passionate and personable coaches I know. Not only will he coach and write excellent workouts, he is also very active in the recruiting game. He will certainly be a huge asset to Duke. Any Blue Devil swimmer or parent reading this should get really excited about next season and the future of Duke swimming!

Swam with Josh’s pop back in the 70’s. Family is salt of the earth! Congrats Josh and make your old man proud!