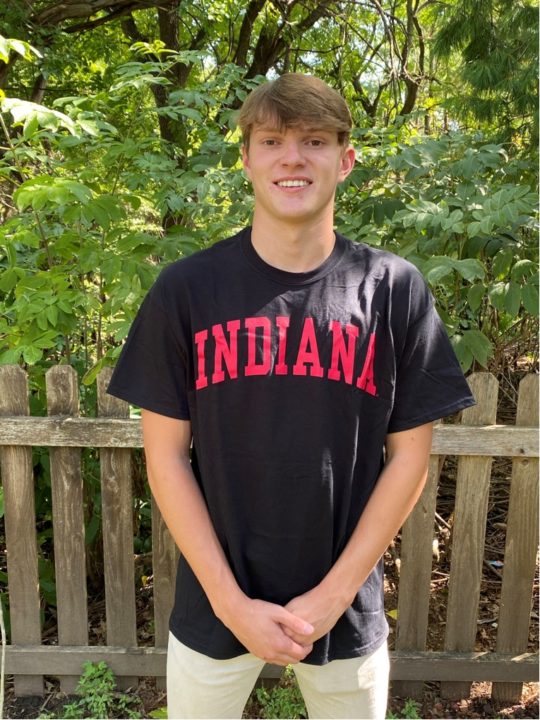 Reiter went lifetime bests en-route to wins in the 200 IM and 100 breast, while Frandson made it three-straight in the 200 free and 500 free. Current photo via Drew Reiter

Originally scheduled to be hosted by the University of Iowa’s natatorium, the 2021 Iowa HS State Championships were instead moved to the Linn-Mar Aquatic Center due to COVID-19 restrictions.

The team from Waukee finished on top on Saturday, ahead of Ankeny, who were runners-up like they were in 2020, and third-place Iowa City West, the 2020 champions.

Iowa City West got things started with a win in the 200 medley relay, going 1:32.24 and getting a 25.55 breast leg from junior Jordan Christensen and a 20.76 anchor from senior Luke Nichols. Sioux City Metro junior Kohen Rankin dropped a 24.89 breast leg, while Waukee junior Drew Reiter was 21.97 fly on their runner-up relay.

Reiter, an Indiana commit, led Waukee to their team title. After his medley relay swim, he dove in for the 200 IM final, dominating the field with a lifetime best 1:47.79, shaving a few tenths off of his old best. In the 100 fly, Reiter returned, downing another best with a time of 48.68 and defending his 2020 title. Reiter also helped push Waukee to a third-place finish in the 400 free relay, splitting 46.00 on the anchor leg.

Bettendorf graduated Charlie Bunn, the 2020 50 free and 100 free champion, who set the state record in the 50 (20.18) last year. They still got to the win in the 50 free this past weekend, though, as junior Alex Stone clocked a 20.67 in a tight win over Muscatine senior and Lindenwood (D-II) commit Ryan Boeding (20.85) as they both hit bests. Stone kept Bettendorf in the win column in the 100 free, effectively extending Bettendorf’s win streak in both events to three consecutive state meets. Stone was 45.17, another best, holding off late charges from City High senior Isaac Weigel (45.24) and Waukee sophomore Aj Abram (45.49).

Linn-Mar junior Aiden Carstensen earned a win for the home team, dropping a ton of time. He was 51.18 going into this meet, which got him to third place last year, but on Saturday he got down to 49.83 for the win.

I love this kid already! The Iowa State Champion wearing an Indiana Hoosiers shirt! Drew, my heartfelt congratulations to you and a warm welcome to Indiana University! We’re thrilled to have you and you’re gonna love it here! I told The GOAT, Coach Ray Looze, and his wife, Kandis, when they arrived in Bloomington in the early 2000s that, “if you love Indiana University, it will love you back and take you to places and heights that you never dreamed of or imagined.” Coach Looze, Blake Peroni, Cody Miller and Lilly King are truly living examples of that statement and you can be, too! Just to give you a little history on the Indiana Hoosiers Swimming & Diving program, if… Read more »

You make me laugh so hard 😂