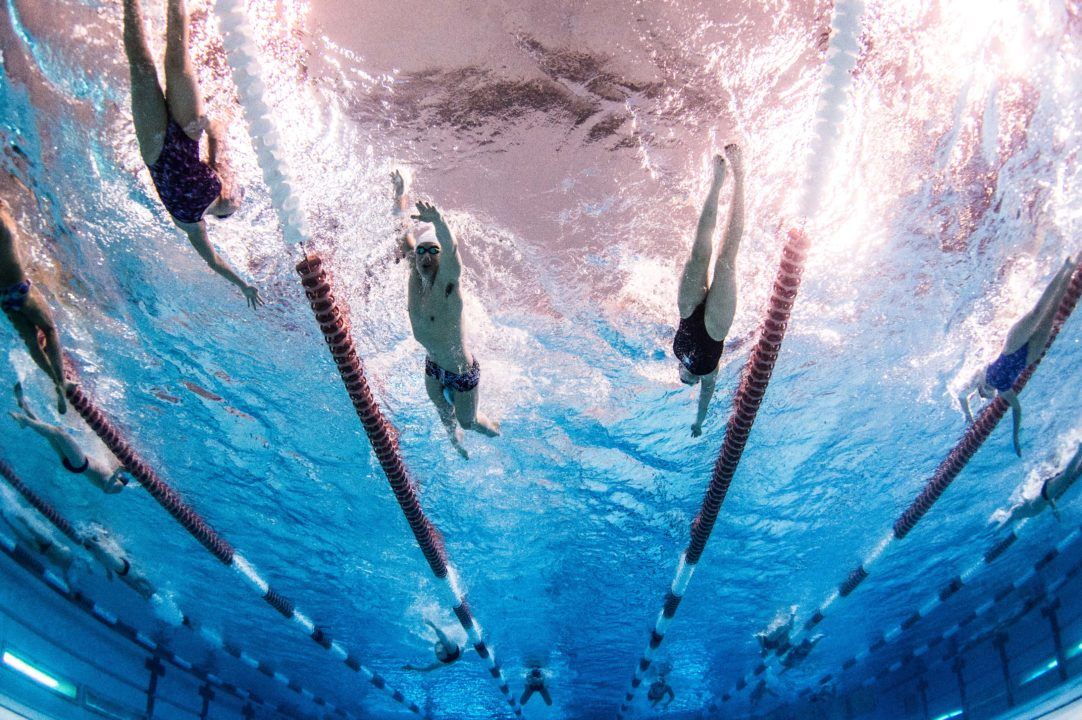 Seldom, do people who think about going fast achieve what they want. The success rate is much higher if they think about the things that make them go fast. Current photo via Mike Lewis/Ola Vista Photography

Seldom, do people who think about going fast achieve what they want. The success rate is much higher if they think about the things that make them go fast. The result of thinking about going fast is usually thrashing in the water, choppy strokes, over-kicking, not relaxing on the recovery phase of the stroke, improper pacing, and other forms of inefficient swimming. Thinking about the things that make them go fast, places the athletes’ focus where it belongs and places an emphasis on efficiency.

DON’T THINK ABOUT THE RESULT

I have heard swimmers, when asked what they were going to do in an upcoming  race, reply 2:00 (or such and such time for a particular distance). If a swimmer has never done that time, how does he/she know how that feels at different parts of the race? How does he/she know what he or she is doing is correct? Thinking about results is useless. Concentrating on the way to reach the desired result makes much more sense. The more intelligent way of doing the 2:00 mentioned above would be to think of  one stroke reminder and one pace hint. Examples might include… get up on your side and reach and build 50’s so that the first 50 is controlled, the second 50 is hard, the third 50 is very hard, and the last 50 is a sprint. If a swimmer isn’t sure what  his/her concentration point or points should be, he/she should ask his/her coach. If the swimmer and coach choose the correct emphasis and the swimmer truly follows through on the concentration, the chance of success will be greatly increased.

DON’T THINK ABOUT TOO MANY THINGS

The swimmer should not give himself/herself too many things to think about. The nervous system can effectively think of only one or two things while conducting a motor activity such as swimming. Concentrating on more than one or two points is useless and only serves to detract from the proper focus and may be confusing. When I’m advising swimmers,  I usually ask sprinters to concentrate on one start or turn tip and one stroke technique hint and usually give middle-distance and distance swimmers one technique hint and one pace reminder. Examples of start and turn hints for sprinters might include…

The purpose of all the above-mentioned suggestions is intelligent swimming.

A MEET IS TOO LATE

A meet is certainly not the time to begin thinking about what makes you go fast. By the time swimmers get to a meet they should have rehearsed their race over and over. Many swimmers and I’m afraid to say many coaches, think that practices are for only getting in shape.

While building strength and cardiovascular conditioning are extremely important to swimming success, this philosophy ignores what I feel is the most important benefit of training, neuro-muscular development. Swimming is a nervous system oriented sport and at least portions of training sessions should be treated as learning experiences and meet rehearsals. Related to the premise of  don’t think about going fast, think about the things that make you go fast, training sessions should be the stage for launching success in meets. I think that isolated technique and drill work, integration of concepts learned in these isolated situations into training sets, and then utilization of these skills in competition is the best, if not the only, progression to success. Isolated technique or pace drills should be used to initially teach a skill, correct flaws, or reinforce fundamentals. Next these skills (i.e. technique or pace) should be integrated into other training sets. These sets may alternate drill/swim or combine drill/swim within the same interval or utilize skills taught in technique/drill situations. When integrating concepts into training sets, the goal should be to increase the use of concepts and fade the use of the drills. Last comes using the newly learned skills during competition.

All the areas of the progression require coaching input. Isolated drills allow for the most input. Input during the integration into training sets should be geared to teaching the feeling of correct mechanics or pace and teach the swimmers self-coaching techniques. During competition swimmers need to be self-correcting, however coaching input should follow the race and directly relate to concentration points. Concentration should not be stagnant. When one skill is successfully learned, integrated into training, and utilized in competition, it can be expanded, refined, or changed.  The important thing is that training sessions and competition should be learning situations and present rehearsal opportunities.

GOOD FOR EVERY STROKE AND THE IM

Even though my examples have been related to freestyle, the same principles should be used for all strokes and the IM. The IM presents a somewhat unique situation because it includes four strokes. I usually give swimmers a separate suggestion for each stroke and either a pace or stroke exchange hint.  The reminders may differ with strokers or IMers but the principles remain the same.

I have had enough success utilizing the idea of focusing on one or two points that I am confident that it works.

THINK ABOUT THE THINGS THAT MAKE YOU GO FAST!!

Extensive experience in coaching and aquatic administration at the international, national, club, high school, and collegiate levels. During this time, I have coached seven swimmers who were ranked in the top twenty-five in the world, ten athletes who have qualified for the U.S. Olympic Trials, ten athletes who qualified for their nations’ Olympic Teams, three swimmers who were ranked in the top ten triathletes in the world (one was a six-time world champion), one swimmer who won four National and Pan-Pacific Championships, thirty seven athletes who became NCAA All-Americans, nine athletes who set sixteen Junior National Records and over eighty swimmers who were ranked in the national top twenty-five.  In addition, I have run swimming camps and clinics for over twenty-five years, and have produced and narrated a stroke instruction videotape featuring Olympic Gold Medalist and World Record Holder, Tracy Caulkins. In addition, I have had a number of articles published by the Australian Swimming Coaches and Teachers Association, the British Swimming Coaches and Teachers Association, the International Society for Biomechanics in Sports and the American Swimming Coaches Association. I have long been recognized for my technical expertise and success at all levels.