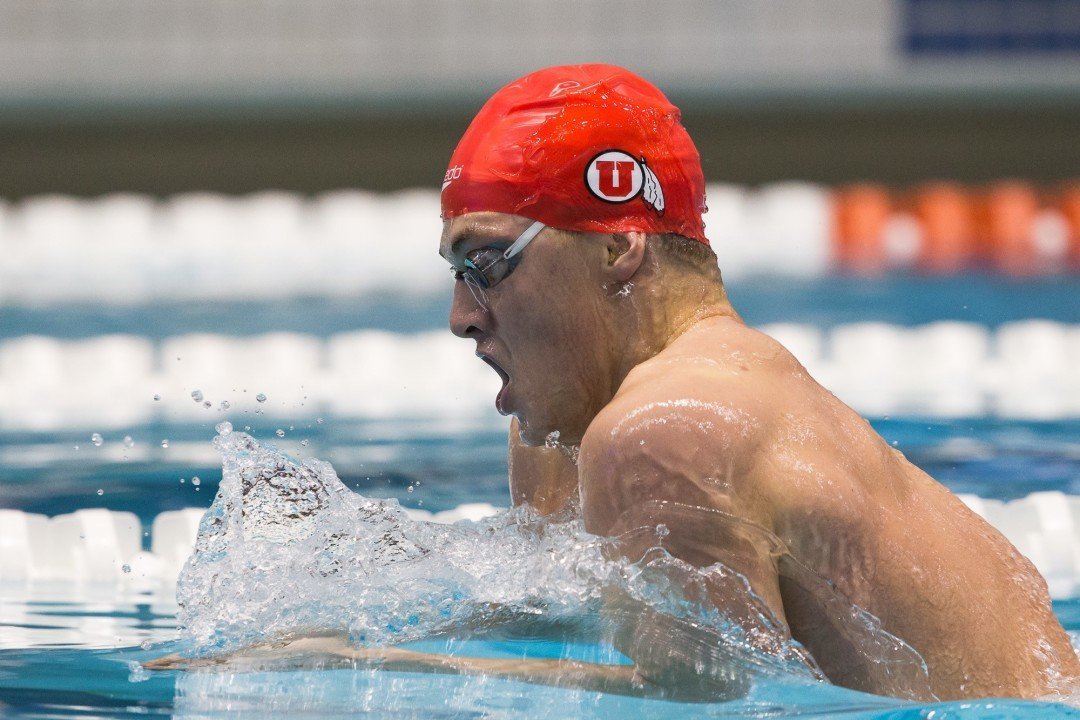 Utah won 6 of 8 shootout events, as well as 15 of 18 regular events en route to a 1st place finish in men's scoring and 2nd in women's. Archive photo via Utah Athletics

Florida International University held its Sprint Invitational on Friday, January 5th. The meet featured the 100 of each stroke, plus the 100 IM, 200 free, 500 free and 200 free relay, and, of course, the 50s, which are run in a shootout style. A shootout is when swimmers compete in the same event multiple times and the field shrinks with each round until the final round when the last 2 swimmers left go head-to-head. At this meet, there were 4 rounds for each 50: the top 8 in the 1st round qualified for the 2nd (quarter final) round, the top 4 in the 2nd round qualified for the 3rd (semifinal) round, and the top 2 in the 3rd round qualified for the 4th and final round.

Utah’s men and women won a combined 6 of the 8 shootout events, and 15 of the other 18 events, however FIU was able to overtake the Utes women’s team with their greater depth. Scoring for the 50s was done on the first round, so the top 16 scored as they usually would at an invite, and no extra points were given in those events past the first round. With that being considered, score-wise Utah only dropped one of the shootout races, because Jack Burton (Utah) won the first round of the 50 breast, but ultimately finished 2nd in the end to Shaun Yap of Saginaw Valley State.

The meet started off with the prelims round of the 50s, then each subsequent round of the 50s was broken up by the other events. Only the results from the 1st round of 50s are on the posted results linked above, so a breakdown of the swimmers who advanced in each of the rounds of each event in the sprint shootout can be found directly below:

Emma Broome controlled this series of sprints nicely, ultimately winning the shootout and beating teammate Sarah Lott, who led off the Utah 200 medley relay in 25.31 at the Art Adamson Invite back in November. FIU‘s Naomi Ruele and Broome went head-to-head in the final round, where Ruele put up her fastest time of the day at 26.65.

No surprise here, Utah’s Paul Ungur, one of the fastest backstroke sprinters in the NCAA, crushed the field in every round, and put up a sub-22 on the 3rd round.

FIU got 5 women into the 2nd round of the 50 breast, showing some breaststroke depth and scoring the team a lot of points, but ultimately did not qualify a swimmer for the final round. Sara Gyertyanff (FIU) went 29.61 in the 2nd round, which tied for the fastest time in the event overall with Genny Robertson (Utah) in the 3rd round, but finished 3rd in the 3rd round and didn’t advance. The final round was a showdown between Utah teammates Mariah Gassaway and Genny Robertson. Gassaway won that round (29.73-29.84), but Robertson went 29.61 in the 3rd round, so she still went the faster time. Robertson had the position on the 200 medley relay back in November, posting a 27.83 on a relay team that went 1:39.85, and needs to shed a couple seconds to be competitive at the top of the Pac-12.

Jack Burton and Shaun Yap battled it out in every round, with each of them winning 2 of the rounds. Yap is currently ranked 7th in the D2 national standings in the 100 breast with his time of 54.44. Meanwhile, Jack Burton has posted a strong time of 53.76 this season, which currently ranks 9th (tie) in the Pac-12. Burton went 25.84 in the final round of the 50 breast, and his fastest relay split this season is 23.66.

Letizia Bertelli went all the way to win the event, but interestingly went her fastest time, and the fastest time in the event overall, in the first round with her 25.39. The 2nd fastest time in the overall event was from 2nd place finisher Gillian St. John, who went 25.41 in the 2nd round. St, John went 25.62 in the final round to Bertelli’s 25.43. Another interesting note about this series is that Bertelli and St. John went 1-2 the whole way through, and if you average out their times, Gillian St. John was faster overall, 25.49 to Bertelli’s 25.60.

This event was Utah teammates Ben Scott and Colton Montgomery all the way through, with Montgomery narrowly edging out Scott 3 times before Scott dropped the hammer in the final round, posting a 22.26 compared to Montgomery’s 22.58. Scott is the flyer on the Utah 200 medley relay as of right now, but Montgomery gave him quite a fight at this meet, which isn’t that many weeks out from the Pac-12 conference meet. Scott has been 20.96 flying this season on a Utah 200 medley that came in under the ‘A’ cut time of 1:24.82.

Dorien Butter won every round of this event handily, but also got slower every round. Letizia Bertelli could have potentially given Butter a race, but finished in 6th on the 2nd round after swimming the 2nd round of the 50 fly with only 1 heat of the men’s 50 free in between.

Utah freshman Clay Stoddard and Rodolfo Moreira batled it out in a field of their own in the 50 free. Stoddard’s final round time of 20.41 is exactly 1 second off his season best, while Moreira’s 20.95 is 1.15 seconds off his season best. Moreira and Stoddard are both on the Utah free relay as of now, which sits less than a second away from the NCAA ‘A’ cut.