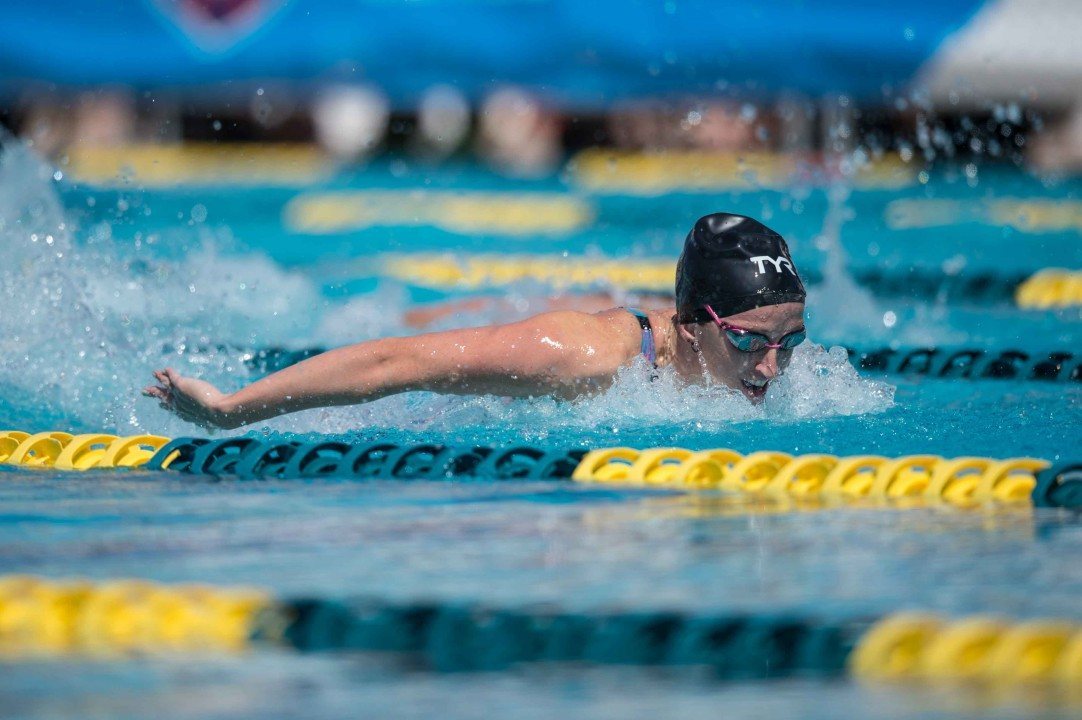 Olympian Claire Donahue blasted one of the best 100 fly times in the nation so far this year in Tennessee, one of several Olympians to light up the Tennessee Aquatics June Invitational in Knoxville. Archive photo via Mike Lewis/Ola Vista Photography

Olympian Claire Donahue blasted one of the best 100 fly times in the nation so far this year in Tennessee, one of several Olympians to light up the Tennessee Aquatics June Invitational in Knoxville.

Donahue, of course, is coming out of a tumultuous spring in which her longtime coach Bruce Marchionda was let go as the Western Kentucky program was suspended after hazing violations. Donahue and Marchionda just ended a long period of uncertainly by selecting South Florida Aquatic Club as both of their landing spots, though they haven’t yet started training there.

But Donahue responded to that period of adversity with a huge 58.99 win in the 100 fly, a season-best and a time that ranks just outside the world’s top 25 for the year. That time would have earned Donahue second place and a $600 paycheck at the Arena Pro Swim Series in Santa Clara the same weekend.

Joining Donahue were several more big-name American Olympians. Open water specialist Alex Meyer was competing at his new Tennessee training home, and won the men’s 1500 free. Meyer, who will represent the U.S. at Worlds in the open water events this summer, went 15:27.38, holding off a continual threat from young Georgia Bulldog Kevin Litherland (15:31.66).

Another new Tennessee Aquatics import is former world record-holding distance swimmer Kate Ziegler, who was a U.S. Olympian back in 2012. Ziegler took an extended break from the pool, but has now resurfaced. She had mostly contested the 200 free since returning to action, but this weekend, she stepped up a level in distance, winning the 400 free in 4:16.11. That’s her best swim in the event since 2013.

And Olympic relay swimmer Shannon Vreeland also made the trek from Georgia, showing up to win the 200 free in 1:59.85. Vreeland was also the top seed out of prelims in the 400 with a 4:16.62, but scratched from the final.

A few other notable names to compete:

2.01.71 in the 200 free. 2 seconds dropped since her first meet in Charlotte.
4.16.11 in the 400 free. 4 seconds dropped since Charlotte.
We still need to see her in the 800 free but that’s interesting. Very interesting.
At this pace Kate is gonna be quickly a contender for the olympic trials. Cool. I would be so happy for her if she could have another chance at the olympic games.