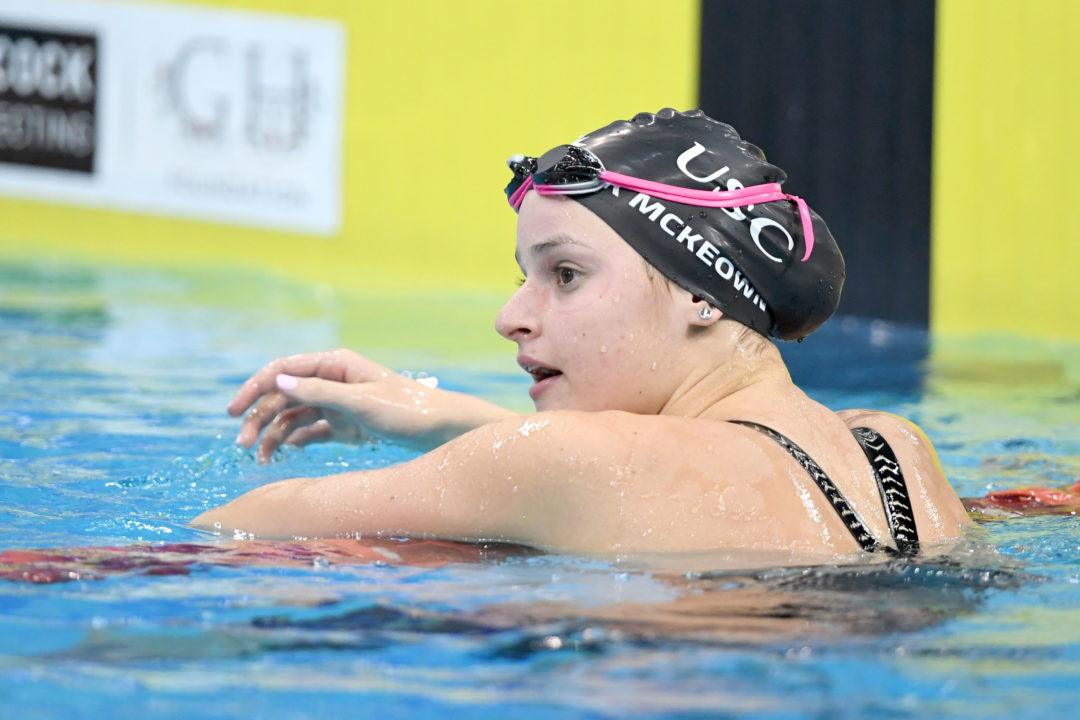 18-year-old Kaylee McKeown won silver at 2019 Worlds in the 200 back. This week, she hit the #1 time worldwide, a lifetime-best 2:05.83. Archive photo via Delly Carr, Swimming Australia

Though American Regan Smith has grabbed the spotlight as the world’s most exciting young backstroker, Australia’s Kaylee McKeown is proving good enough to emerge from Smith’s shadow internationally.

The 18-year-old McKeown took silver behind Smith in the 200 back at 2019 Worlds. Had Smith (also a teenager) not smashed a world record in that race, the story of McKeown winning her first major international medal – silver on the Worlds stage – would have been a major storyline of the event.

McKeown hit a personal-best 2:06.26 in that race, dropping a half-second. But this week in South Australia, McKeown bettered even that time, going 2:05.83 to win the South Australia State Championships.

That time was a tenth better than the one put up across the world by Smith in the same week – Smith swam in the U.S., going 2:05.94. The two now sit #1 and #2 in the world ranks for the season. And McKeown moves to #7 all-time in the event, passing Katinka Hosszu. McKeown is #2 all-time among Australians, and just two tenths from a 2017 national record held by Emily Seebohm. Here’s a look at the star-studded list of top backstrokers in history:

Very good swim. Anyone know if she rested much for this meet?

Her coach said she’s in the middle of ‘strong training ‘

I’m pretty sure a couple years ago there was a British coach who said McKeown would be the one to go down to Franklin 200bk times. Anybody remember who exactly it was? There is a lot of go between with UK and Aussie coaches these days so I figured she must be held in massively high regard back then.

Yes us Aussies have been following her times as she moved up the junior ranks & there has been strong indication that Mckeown had the potential to go after Franklin 200bk times. I had never heard of Smith before she blew everyone apart at the Worlds, but lots of Americans were predicting big things for her, maybe not blowing Franklin’s time out the water, but certainly one with massive potential.

McKeown and Smith were trading WJRs for a while and my impression is that they were progressing at a similar rate until Smith took a quantum leap forward last summer. One can only hope that McKeown can continue to improve as well, since she clearly also has tons of potential.