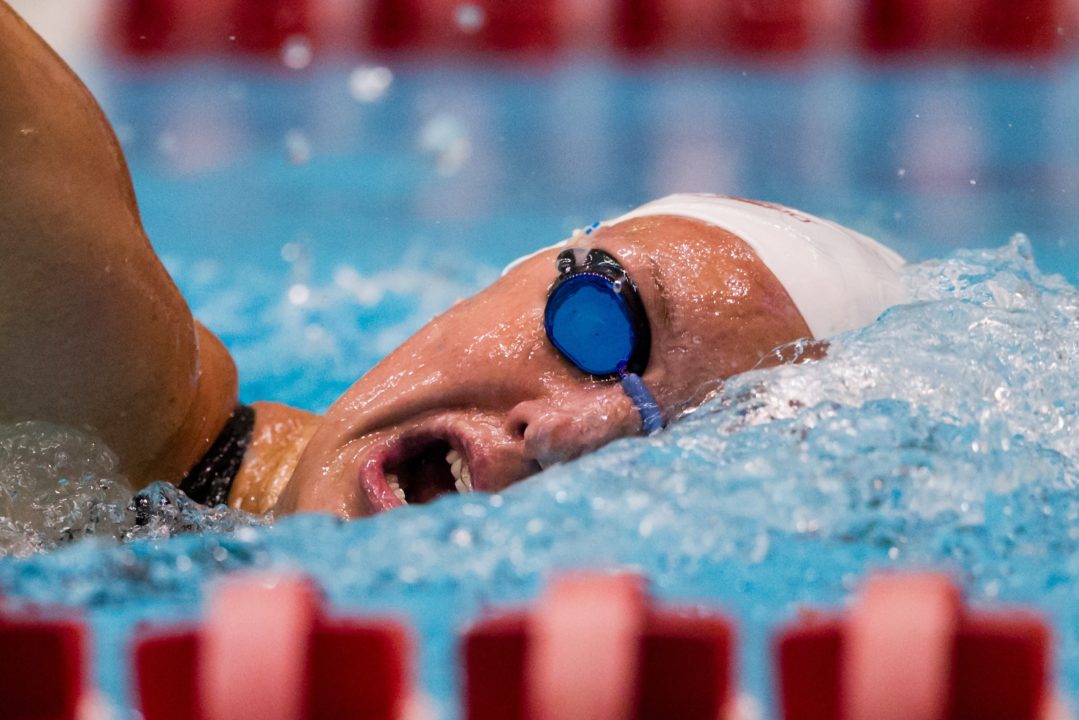 The 2012 FINA World Cup Series continues in Doha, and Saturday’s competition saw plenty of repeat victories. USC’s Katinka Hosszu, who cleaned up in Dubai, continues to take a lion’s share of the women’s purse. Though her undefeated record was damaged with a bronze in the 200 back, she still managed to come away from the first day of competition with three golds as well.

On the men’s side, Japanese teenager Daiya Seto was back with a vengeance–clearly disappointed from some losses in close races in Dubai as he tried to juggle a tough lineup. Saturday he proved he’s capable of doing so, picking up three golds in a deadly cocktail of 400 IM, 200 fly, and 200 back.

Despite the fact that she’s usually an IMer/flyer, Katinka Hosszu is continuing her dominance in the freestyle events here at the World Cup Level. After cleaning up last weekend, the three-time Olympian and NCAA Champion turned right around and went even faster in Doha, winning the event in a time of 8:29.31, two seconds faster than last week. Tanja Smid was second in 8:30.60 and Hosszu’s fellow Hungarian, Zsuzsanna Jakabos, who has been at Hosszu’s feet for most of the series so far picked up another bronze.

In a 100 free dead heat, Australians Tommaso D’Orsogna and Kenneth To tied for first in a time of 47.10. This was the first win of the series for D’Orsogna, who came away from last week with a third and a fourth, but a back-to-back victory in this event for To. Keeping the race competitive was USA’s Anthony Ervin, who finished third in 47.17. Ervin’s strategy was similar to last week: go out ahead of the field (in a 22.0) and try to hang on. Last week it was good for second, on Saturday it gave him the bronze.

After only a 100 free in between this and her last event, Hosszu was back in the water to rack up more prize money in the 200 free. Back in the water for her second event of the night, Hosszu continued her reign, winning in a time of 1:54.79 (nearly 11 seconds faster than her opening 200 on her 800.) Sweden’s Michelle Coleman was second and Ukraine’s Darya Zevina was third.

South Africa took the top two spots in this event, with Cameron Van Der Burgh winning in a 25.95, not too far off his world record of 25.25. He was the only swimmer in the field to break 25, with Roland Schoeman going 26.38 and New Zealand’s Glenn Snyders touching third in 26.68. So far Van Der Burgh has cleaned up in the sprint breaststroke events on this circuit.

This was a much better swim for Schoeman. Last week the sprint freestlyer, who is also the second-fastest sort course 50 breaststroker, only managed a 7th place finish.

Johansson should continue this trajectory and get into the sub-1:05 range as the series continues.

Once again, Japan’s Daiya Seto was just off his Japanese record time of 4:02.44. His 4:02.51 was “closer but still no cigar” after his 4:02.6 in Dubai. Hungary’s Laszlo Cseh and China’s Chaosheng Huang took second and third.

Seto’s 55.1 on the opening leg gave him a huge advantage and he managed to hold the lead throughout the race.

Therese Alshammar of Sweden, the defending champion in the FINA World Series had to sit out much of the Olympics due to an injury (though she toughed her way to a 50 free final) picked up another World Cup win with a 57.22 100 fly, besting second place finisher Inge Dekker by almost a second. Alshammar proved she’s moving in the right direction, besting her time from last week by seven tenths.

Australia’s Bobby Hurley won the 100 back in 50.18. Short course star and last week’s champion Stainslav Donets of Russia was close behind him in 50.47 and Kosuke Hagino of Japan behind that in 50.92. Hagino didn’t swim the 400 IM or 400 free here, which was surprising as he won the 400 free in Dubai and took bronze in the 400 IM at the Olympics.

The women’s 50 back was one of a many events that saw a similar podium to last weekend. On Saturday Japan’s Noriko Inada came out on top, going 27.29 to out-touch Rachel Goh of Australia, who finished second in a 27.67.

Japan’s Seto meant business Saturday, obviously disappointed from the close races he lost a week ago. He managed to take down Chad Le Clos, Olympic champion who won this event last weekend as well, beating him by just .01. Their final times of 1:51.30 and 1:51.31 put them ahead of Tom Shields, who took third for the US in a 1:52.72.

After taking second in this event in Dubai, Hurley picked up his second win of the night in the men’s 400 free. His strong back half helped him defeat Kecheng Wang of China. Their times were 3:42.89 and 3:44.15.

Defending world champion Alshammar picked up her second victory of the day in the 50 free, beating Germany’s Britta Steffen by just two one hundredths to defend her title. Alshammar’s time of 24.44 was over a full second slower than her winning time in 2009. This is the second time now that Steffen has just missed the top spot in this event.

Never one to shy from a tough schedule, Seto proved he can manage his lineup much better this weekend. Where as last week he struggled to win multiple events on the same day, Saturday he picked up a third victory in the 200 breast not long after the 400 IM, winning in a time of 2:04.87. Germany’s Marco Koch, who won last week, swam a 2:05.72 that was good for second and American Sean Mahoney swam to a bronze medal finish with a 2:06.23.

In the 100 IM, To proved that a first place tie wasn’t good enough: he needed the top spot all to himself. After a blazing 23.13 on the first half, To managed to hold of George Bovell on the second 50, going 51.58 to beat Bovell’s 51.87. That time was just off of To’s own Australian Record set last week. Bovell’s renewed IM focus seems to be paying off, as he was about a half-second faster here than in Dubai. Darian Townsend of South Africa was third in 52.76, making the podium identical to last week.

Fatigue had set in for Hosszu by the time the 200 back rolled around, but she still managed to earn herself a spot on the podium, taking the bronze with a 2:07.54. Daryna Zevina of Ukraine took command of this event, going 2:02.99 to beat New Zealand’s Melissa Ingram (2:04.95) and Hosszu.

The top three finishers in this event all went 22s, Roland Schoeman of South Africa leading the pack in a 22.3. Kenya’s Jason Dunford and Le Clos battled it out for the second position, with Dunford’s 22.87 besting Le Clos by just .03.

Just like in Dubai Germany won the 4 x 50 mixed medley again, finishing in an almost identical time of 1:43.38. They stuck with their lineup of Jenny Mensing-Marco Koch-Helge Meeuw-Britta Steffen (G-B-B-G), keeping backstroker Meeuw in the fly.

The Hungarians too kept it the same as last week and opposite from the Germans with Laszlo Cseh-Zsu Jakabos – Katinka Hosszu – Krisztian Takacs (B-G-G-B) stepping up for them. They finished in 1:45.34.