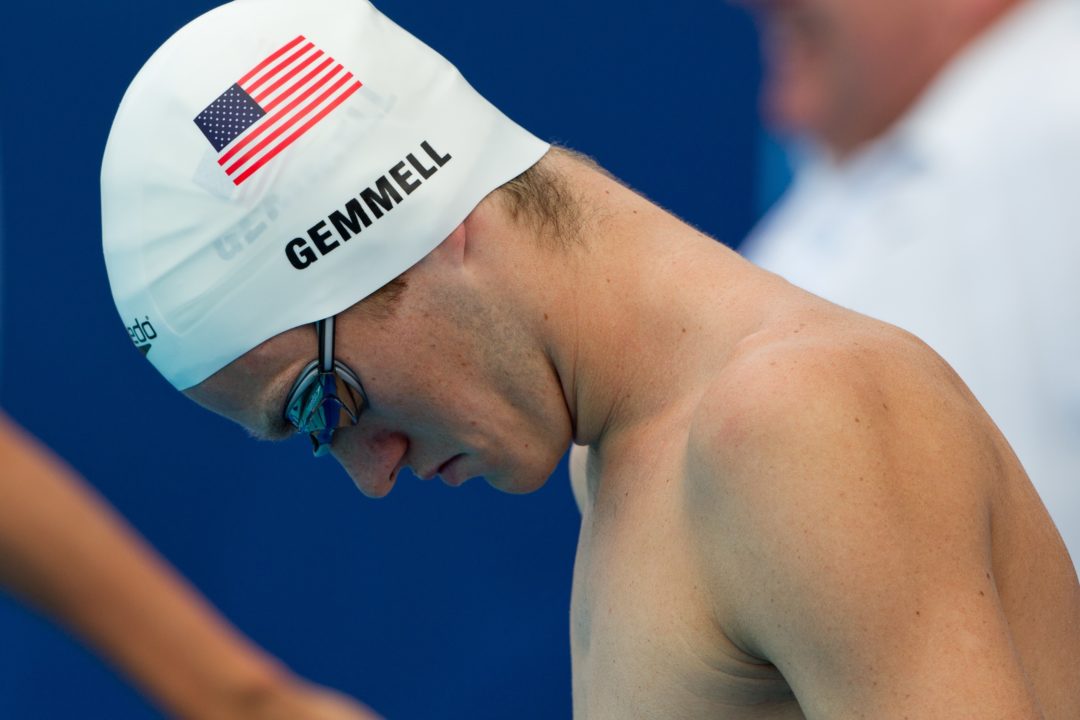 A successor has been named for the Nation’s Capital Swim Club (NCAP – formerly known as Curl Burke) site at Georgetown that was recently vacated when Yuri Suguiyama took the Cal Men’s assistant coaching job.

That successor will be Bruce Gemmell, a coach who already has a significant resume in distance swimming from work with his son Andrew Gemmell – the winner of the men’s 1500 at this year’s Olympic Trials.

Gemmell comes from a position as the Senior National Team coach at the Delaware Swim Team that has produced most recently swimmers like Kaitlyn Jones and National Age Group Record holder Tanner Kurz. Gemmell also traveled as the head coach of the USA Swimming Junior Open Water team as they headed to Canada this year for the first ever Junior Open Water Championships.

The first, most noticable difference will be in the ages – Gemmell has quite a few years on Suguiyama, the site’s old coach. Aside from this, they have certainly found a distance coach with an outstanding reputation who is more than capable of picking up right where Suguiyama left off.

It is good that he has at least one female distance success. If I had a S1,000 for every coach that tried to train distance girls like men I would be out driving around in my latest model Ferrari.

1st….some of Braden’s details are off in this blurb. Tanner Kurz is not a Bruce Gemmell product.

not sure what kind of significant distance resume he has? credit uga coaching staff on andrew’s success at trials & making the olympic team.
yes bruce had his son coming out of hs as a VERY respectable distance free swimmer:
scy – 423/915/1522
lcm – 359/813/1514
in the 400/800/mile respectively.
the last 3 years you have to attribute to jack & his time with Fullerton

only a dissection, not going to change anything

michman – I don’t believe it says kurz is a genmell product. He did swim for gemmell’s club, however, and if they expect to build as a successful club, part of that success would come under some of his other coaches, no?

Andrew went home this summer after school to train with his father before Trials and so not UGA credit. Also, remember he was silver medalist at Worlds OW 10K in high school when only his dad coached him. Give Bruce some coaching credit..he deserves it.

Maybe his dad was preparing him for future success very successfully; not overtrain him or burn him out in high school. If that was the plan it seems to be working very well. Maybe a club coach who actually has long term success of his swimmers in mind. Not many of those out there.

i guess you’re right. that is a clever journalism move there though, attaching tanner’s name in the same sentence as coach Gemmell. For someone just reading it over it lends one to believe it to be the case. as happened to me

I presumed this to be Kaitlyn but I am not that obsessive to check. Furthermore I consider those times to be very much a ‘successful distance swimmer ‘.

As for Andrew Gemmell -he has done fantastic & no one gets those results as a young adult without some solid beneficial youth distance background.

In my mind these 2 swimmers have put Delaware on the map. if ey are Bruce’s then he is a good coach.

No, Lauren Driscoll won the 800 free (Florida) and Chelsea Chenault won the 400 free (California). Kaitlyn was not part of the 2010 Junior Pan Pac team. Nicole Vernon was though.

I know that a lot of time (and 10,000’s of miles in the tank) has elapsed since this writing….but…..having followed Stone Ridge, and Cardinal swimmers, I predict that the above record for SCW 1650 will be shattered this weekend in dual meed either with Cal, or UCLA………..14:58……as Bruno Mars says, “Just watch”………..stay tuned…..gauntlet……..here we go…AGAIN.

What do you see as the major differences? Thanks.

Coaches have a long term plan for their swimmers. High school swimmers are still in development – they are not at full maturation. Coaches develop their athletes through the age group years and high school years. With the right guidance, they will springboard into their ultimate potential in the collegiate years and beyond. You need all the pieces of the puzzle. The foundation of the swimmers is just as iimportant.

Gemmell coached his son and Jones both from like age 9. I think he can figure out developing swimmers and long term plans.

Very Correct. Coach Gemmell looks at long term, focused on developing age group swimmers. Not focused on short term success, college rankings, etc… not sure they were ever fully tappered for a SC meet. Like his son and Jones, for the past 4 years his focus was on trials…and it paid off for both of them.

My point exactly! Give him credit!