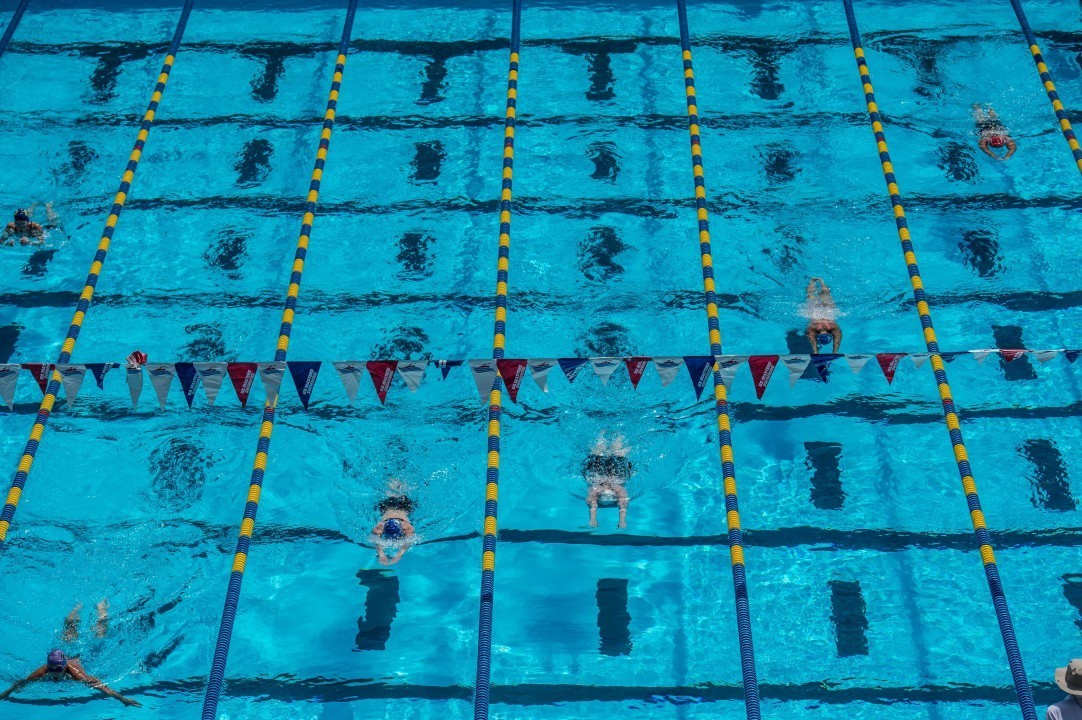 CDC report strongly recommended not to “pee or poop in the water” in order to prevent dangerous chemicals from forming when that pee or poop chemically reacts with the chlorine. Stock photo via Mike Lewis/Ola Vista Photography

Courtesy of SwimSpray, a SwimSwam partner.

The Center for Disease Control and Prevention just released its Annual Healthy Swimming Report with tips for “staying healthy” when swimming. The report strongly recommended not to “pee or poop in the water” in order to prevent dangerous chemicals from forming when that pee or poop chemically reacts with the chlorine.

The CDC recommends that anyone using “pools, waterparks, hot tubs, splash pads, and spray parks” should be careful about “chemicals that form when chlorine mixes with pee because “these chemicals—not chlorine—can cause your eyes to get red and sting, make your nose run, and make you cough.”

These “chemicals that form” are called chloramines. Chloramines form when chlorine, intended for sanitizing the pool, reacts with nitrogen. The word chloramine comes from chlorine reacting with a type of nitrogen compound called an “amine,” generating a chloramine. Newsweek describes the chemical reaction as “nitrogen in urine binding to chlorine to form chloramine.” Jezebel explains that “Chlorine binds with all the things it’s trying to kill from your bodies, and it forms these chemical irritants.”

The CDC points out that “healthy pools, waterparks, hot tubs, splash pads, and spray parks don’t have a strong chemical smell.” EXACTLY. The same point holds true for people. People should not have a “strong chemical smell.” Here, the problem is exactly the same. The surface of a person (e.g., hair, skin, eyes, nails) is made mostly from protein. Protein has lots of nitrogen, which reacts with chlorine to form chloramines, which are bad. The presence of chloramines on human hair and skin is detectable by smell, which is often described as “eau de chlorine.” You can test yourself by licking your arm and sniffing it after a day at the pool.

From what I can tell, all swimmers recognize the chlorine problem. However, for years, most swimmers have either ignored it or contributed to the problem.

After the London Olympics, US Weekly, ran an article about Ryan Lochte admitting to peeing in the pool. Lochte later made a viral video on the subject.

Michael Phelps told the Telegraph, “I think everybody pees in the pool. It’s kind of a normal thing to do for swimmers.” Phelps went on to explain that “chlorine kills it so it’s not bad.” To be clear: Peeing in the pool shouldn’t be normal. Chlorine doesn’t kill it. It is that bad.

Recently some influential members of the swimming community have recognized the importance of minimizing chloramine exposure, which has just recently become possible for people regularly exposed to chlorinated pools–like competitive athletes. SwimSpray is the first and only product that neutralizes chloramines from hair and skin. The difference is noticeable because it’s up to 400 times more effective at neutralizing chlorine than shampoo or soap.

“I don’t know how I ever got along without it….my hair and skin are so much healthier.”

Doctors, including pediatricians and dermatologists agree. SwimSpray’s technology makes sense and has no concerns for side-effects because it’s only ingredients are two forms of vitamin C and ultrapure water.

SwimSpray was invented by Dr. Andrew Chadeayne, a former Princeton University swimmer and chemistry Ph.D. from Cornell University. Tired of smelling like chlorine after his swimming workouts, Andrew set out remove chlorine from hair and skin ( SwimSpray works where so many other chlorine removal products (e.g., swimmers’ shampoos) have failed previously because SwimSpray’s all-natural vitamin C based formula breaks this bond, neutralizing the chlorine, and allowing it to be washed away with your favorite soap or shampoo.

So much chemical misinformation in this. I get selling the product, and the product itself makes sense. But the article is full of chemophobia. I’ve said it before, but in order for chloramines to be formed from the “chlorine” in a pool (sodium hypochlorite…aka bleach…usually) and urine, the pH of the pool would have to be so acidic that the swimmers would be burned in such water prior to ever worrying about peeing in it. And the surface of skin cells, etc, are mainly fats, not proteins (although proteins are present). While proteins are definitely nitrogen-containing (as they’re made from amino acids), in order for the protein to denature and have the nitrogen be used for reaction purposes, you’d see… Read more »

Dr. Phil – Thanks for your interest in this subject! To be clear, are you contending that “chlorine” (here, hypochlorite salts) does not react with amines at a temperature of about 25C and a pH of about 7? We should clear that up. I’m pretty sure that the reaction is both kinetically and thermodynamically favored. Plus the “chlorine cover” left behind on human hair and skin has been quantified by at least two independent laboratories in the last twenty years. (Google “Chlorine Cover” to get results of tests run in sanitization research – Gottardi is a leader in the field). Are you proposing that the CDC’s warning about peeing in the pool is entirely misguided? You state: ”in order for… Read more »

I was at all four days of the Wisconsin short course state meet this last spring. There was basically very poor air circulation. In addition, there was no cool down pool (yes, a state championship meet without access to a cool down pool) which resulted in kids peeing in the competition pool. By day three and four the Chloramines in the air were intolerable. Upon entering the pool area, my eyes burned, everyone was coughing, and had running noses. It took days for my cough to go away. It definitely was not healthy. In my opinion, the meet should have been canceled. The LSC is discussing rule changes to allow them to do so. After the fact, I spoke with… Read more »