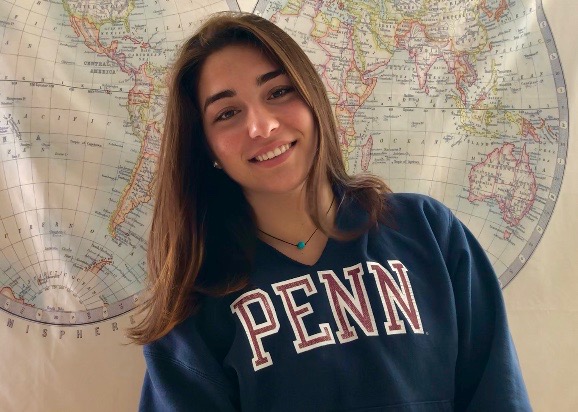 Ardmore, Pennsylvania's Anna Kalandadze will head home after a year at Cal to swim for the Penn Quakers in 2020-21. Current photo via Anna Kalandadze

Anna Kalandadze, who graduated from Lower Moreland High School (Huntingdon Valley, PA) in 2019 and spent her freshman year at Cal, has announced her impending transfer to the University of Pennsylvania. Kalandadze will be a second-generation Quaker and will follow two older sisters who also went to Penn.

“I chose UPenn because of the top tier academics and the relationship I have built with Coach Schnur. I am very excited to get back in the pool with my new teammates and do my part in helping the team succeed!”

Kalandadze swam for Cal during the 2019-20 season but entered the NCAA transfer portal at the beginning of March just prior to the Pac-12 Championships. She dropped significant time in both the 1000 free and 1650 free in December at the 2019 Minnesota Invitational. She placed fifth in the mile with 16:12.01, a PB by over 12 seconds, and earned a lifetime best in the 1000 (9:46.58 leadoff split) during the same race. Those times would have put her 3rd in both races (the Ivy League swims the 1000 at conference), behind Princeton freshman Ellie Marquardt and Penn sophomore Catherine Buroker) at the 2020 Ivy League Women’s Swimming and Diving Championships. Her best 500 time also would have scored in the top 8.

The Quakers have had a good deal of success in distance freestyle under head coach Mike Schnur. In addition to Chris Swanson, who surprised the field to win the mile at 2016 NCAA Championships, Penn’s recent distance stars have included Buroker, Virginia Burns, and Shelby Fortin. Burns won the 500 all four years (2015-18); Fortin won three time (2011-13). Buroker won the 1000/1650 in 2019.

Who wouldn’t want to swim under Chris Swanson? What an inspirational swim!!

Has sumner ever actually swum since the transfer?

I believe she stopped swimming and is only attending school at Yale.

Pretty impressive in itself!

Thank you for the feature!! I would also like to say that I went to Lower Merion High School in Ardmore PA