All in the details: Tripp Montgomery and the turnaround of Carolina Aquatics 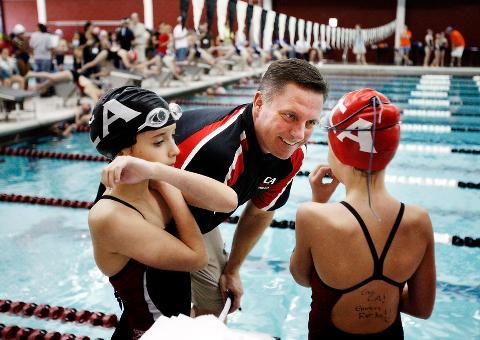 In the summer of 2010, Carolina Aquatics was in trouble. The Columbia, South Carolina club was struggling to bring in swimmers, sitting with a team of less than 40 while disagreements between parents and coaching staff were threatening to sink the whole boat.

But sometimes the biggest problems are solved by the smallest details.

It’s a concept swimmers can relate to. We stroke and stroke and stroke, tuning up the finest details, we go back and forth down the pool day after day in search of tenths, even hundredths of seconds, miniscule, detail prizes whose worth only a swimmer can understand.

“It’s all in the details.” That’s the motto Tripp Montgomery brought with him when he took over Carolina Aquatics in 2010. It’s clearly a motto that works. In just four years, the club has grown from 38 athletes to over 227, rising up the state ranks to become the top club in the Columbia area.

For Montgomery, an alum of the early ’90s, early David Marsh Auburn swimming program, success in the pool is no strange sight. But the journey from swimmer to coach wasn’t exactly aquatic most of the way. Montgomery’s first career was a a clerk trader for Lehman Brothers.

“I was in the hot seat,” he says of the job. Moving around millions of dollars in stocks and following the tiniest details of the market, Montgomery was in charge of massive investments, much as a swim coach is in charge of handling his athletes’ “investments” of time and work – those latter investments perhaps more treasured by their original owners.

The job, though, became one of the unfortunate casualties of technology. As computers started doing more and more of the research work for him, the jobs of clerk traders became increasingly unnecessary for firms like Lehman Brothers. Montgomery took the opportunity pursue another passion of his, jumping into a new career with outdoor activities giant REI.

“I saw a chance to work in what I loved,” he says, “outdoors, physical fitness, physical activity stuff.” Though he didn’t know it at the time, it was also another step back towards the pool.

Though the obvious parallel is to look for what business skills Montgomery brought with him from Wall Street to his new life as a swim coach. But Montgomery is quick to trace those skills back even further.

“Everything I did really came from what I learned at Auburn,” Montgomery says. “Some of it is the in-the-pool stuff, the details, the hard work. But it’s also how you talk to people, how you treat people, how you shake someone’s hand.”

Montgomery is quick to credit former Auburn coach David Marsh for those skills. Montgomery swam with Auburn during the beginning of Marsh’s wildly successful run with the program, graduating the year before Marsh’s Tigers won their first of 7 NCAA titles. The two keep in close contact, and it was actually Marsh who got Montgomery to South Carolina.

Montgomery was coaching with Nitro Swim Club in Texas during the REI years when Marsh contacted him about a coaching position with a club in need of a new start.

Montgomery still recalls the conversation. “He said ‘You’ve been through the rebuilding process at Auburn, and I think this would be a great opportunity for you to be a head coach.’

“I remember standing up and looking at myself in the mirror,” Montgomery says of his phone conversation with Marsh, “standing tall like I was talking to him face-to-face, which is something he always taught us to do.”

That was the first of many David Marsh skills that would both get Montgomery to South Carolina, and help him excel once there.

Instilling a new culture in an established team can be one of the toughest parts of being a new coach. Montgomery had the unique challenge of being a relatively low-yardage, quality-based coach in a sport where coaches, athletes, and especially parents can tend to cling to the tried-and-true philosophy of pounding yardage.

“I’m a big believer in details,” says Montgomery. “My thought is, why would I give you a crushing yardage set when you can’t do a streamline right?” He laughs. “Let’s bring down the yardage and focus on the details. Then eventually, we can bring the yardage back up again, but be swimming it the right way.”

“I explain it to swimmers like this: you have to pass second grade before you can take third grade. You can’t take algebra II and understand it until you understand basic math.”

It’s a philosophy that smacks of Marsh, now a club coach himself just one state over, at SwimMAC, the nationally-renowned haven for professional athletes, especially of the sprint variety. Montgomery doesn’t hide the influence one bit.

“I gained everything from him,” he says of his former coach.

A culture change is tough for any club. Though he admits there was pushback at times, Montgomery says his team picked up on things very quickly.

“I’m very proud of how our swimmers embraced the changes,” he says. “They really embraced it, and once the swimmers were on board, the parents followed.”

Montgomery is quick to credit multiple parties with the successful switchover. “I’m hugely thankful for my staff, for my board of directors, for my parents and my athletes,” he says. “It’s been an awesome situation.”

So what does Montgomery say to coaches working on their own culture changes? Anyone who’s been through leadership change knows what a rocky road it can be.

Montgomery says the best advice he got was from Jeff Hike, a former Auburn teammate who went on to coach at SwimAtlanta. “He told me not to try to be SwimMAC or SwimAtlanta, but to be myself, and it’ll all grow off of that base,” Montgomery remembers.

As both of those goals have begun to come to fruition, things have settled down mightily for a club once in turmoil. Montgomery doesn’t look past the beauty of that stability.

“When you have people who believe in something, and a team that’s been through so much… it’s just a really special thing to be a part of.”

This article days it All! Tripp makes hard work fun and such life skills easy to master. CA is on the Move….

I was in Tripp’s high school team. He was awesome then. A smart, confident guy everyone respected. No surprise he’s leading success down in SC!

Really stoked to see Tripp recognized for all his hard work and emotion he pours into his kids and this program. So few coaches out there invest in athletes the way Tripp does and it is evident in his results that he is a true fan of the sport. We swam together and were room mates for years back in the Auburn days and I’m proud of the coach he has become.

Carolina Aquatics, you have something good here with this kid, take good care of him. Tripp, I wish you fast swimming and excellence in the upcoming season. War Eagle!

Amazing how any people still don’t get this: “I’m a big believer in details,” says Montgomery. “My thought is, why would I give you a crushing yardage set when you can’t do a streamline right?”