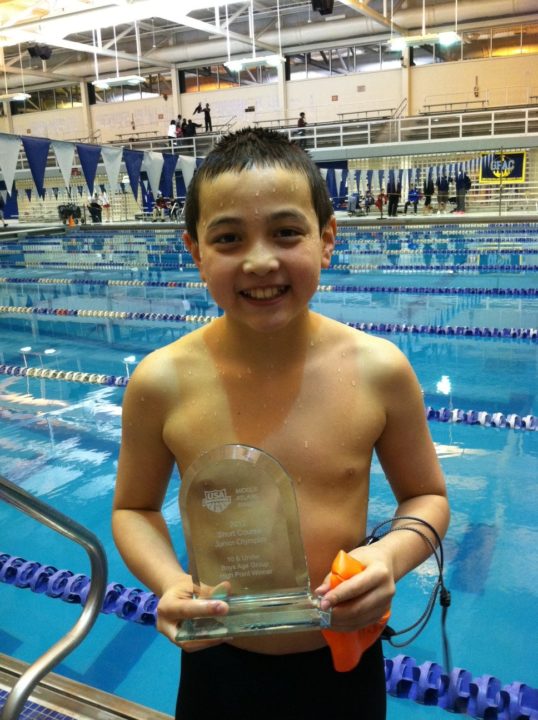 Thanks to MitkoSwim for posting the video to YouTube

Destin Lasco of the Atlantic City Aquatic Club is quickly becoming the king of 9-10 backstroke in this country; adding to his ownership of both of the short course records, he now holds the 50 and 100 backstroke National Age Group Records in long course meters (50m) as well.

Lasco’s mark went down very early in the long course season at a meet this past weekend at the Gloucester Institute of Technology.

In the 100 back, he swam the really impressive time of a 1:09.82, which destroyed by over a second Ryan Murphy’s 1:11.01 from back in 2006. Murphy is now a potential Olympic Trials finalist at only 16, and this time knocks him off of the 9-10 record board – he holds a backstroke NAG Record in every other age group he’s been through.

He would have also broken the National Age Group Record in the 50 backstroke, had it not been taken down just a day earlier by Vincent Marciano. Lasco swam a 32.58 in that race, whereas Marciano had already lowered the record to 32.07.

He still looks very smooth in his backstroke swimming, and even without a super-high turnover he’s clearly heads-and-tails above the rest of his age group. He is certainly tall for his age, but at just over 5 feet tall is not towering over his other competitors.  Destin will have almost a full summer to take these records even lower, as he doesn’t age up until early August.

Whoa whoa whoa Ryan Murphy is “now a potential Olympic finalist at only 16”? Pump the breaks. First of all, Ryan Murphy may “now” be 16 but he will be 17 by the time the Olympics roll around. But that’s the least of our troubles. Consider the leap that Ryan will need to make in time to qualify for this summer’s olympic final. First, he’d have to qualify for the US team. Conservatively, this will take a 53.5 or better in the 100 back. I say conservatively, because it will probably be much faster. His best time is 54.96. He would actually have to speed up his rate of improvement (on a percentage basis) to get down to 53.5. Maybe… Read more »

It’s impressive to watch. Congrats to Destin Lasco.
For Ryan Murphy I repeat he’s the future king of backstroke. It’s a little soon for him to qualify at the olympic games this year but I think he can swim this summer under 54 seconds in the 100 back and around 1.55 in the 200 back. Next year he can be in the american team for world championships and in 2016 he will be the big favorite in the 2 events.

Holy underwaters, batman! Not too shabby for a ten year old.