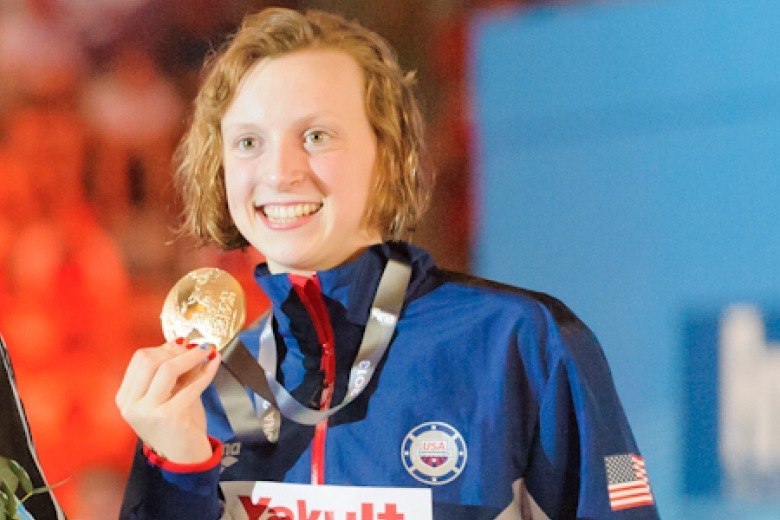 Katie Ledecky's swim stood out as the top story for the Americans, even with the exciting finish of the women's 400 free relay. (Photo: Victor Puig/victorpuig.com)

Every time we see Katie Ledecky in the pool, she does something new that astounds us. Every time we see her in the water, she has a new gear, a new event, or a new kick that we haven’t seen before. En route to this World Championship meet, she showed all three.

This race might have been all three. Ledecky didn’t swim the 400 free last year at the Olympics, but she did show her potential with a split in the 800 free that was the American National Age Group Record.

This year, with an eye on stopping at the 400 in this, her first race, the expectations were high, and Ledecky flew to meet them.

She swam a 3:59.82, which is the second-fastest swim in the history of this event, the fastest not done in a polyurethane suit, the second woman under four minutes, a new United States 15-16 National Age Group Record, and a new American Record.

Let’s start with some comparative splits:

So what are we looking at here? Katie Ledecky went out in the 4th-fastest 200 free (1:58.74) we’ve seen among the fifty fastest 400 frees in history, and she was still able to negative-split the last three hundreds.

Now, she’s not quite to the level of control that Federica Pellegrini had in 2008 and 2009 in polyurethane (Pellegrini could go out in 1:58, or she could come home in 1:59), but short of that, Ledecky has found her wheel-house. She knows she has a history of starting too fast, but she’s now been able to combine that with an ability to finish very fast as well. That’s dangerous.

Other Thoughts on the USA

Ledecky’s performance was well beyond my expectations, and by margin, and I didn’t believe she is capable of breaking the 4 minutes barrier. She gave me a big slap in my face. Ouch!

Muffat! What’s wrong with you! There are clearly some psychological issues which relates somehow to the Agnel-Pellerin drama. She didn’t even try over the last 200 metres and even I could see it. You must concentrate on and get your mind back in order. I hope it so much!

I do believe that I don’t have to say my picks went horribly wrong… again. 🙁

I agree. Can’t wait for her other distance events. If only she had kept the 200! It might’ve meant five golds for her (I’m getting ahead of myself, but still)!

Ledecky will smash both those world records.

“Did Jimmy Feigen get put through to finals on 400 free relay because he was 2nd at Trials? Or because the coaches thought he was the best option? Would be an interesting answer to hear.” Interesting that your hindsight question for the men’s sprint relay was with regards to Feigen and not you know who. But Feigen earned his spot in the prelims with a solid lead off split (as did Berens in my opinion). He didn’t swim as well in the evening but you can’t put that on the coaches. They could have done what the women’s coaches did with Vreeland and just promote the 2nd place trials finisher direct to the finals without a morning swim. The only… Read more »

Obviously the coaches went with who they thought were the best options (as they always do). We’re just playing Monday Morning Quarterback or Swim Geek dissection (it feels like a post mortem when you don’t meet expectations). You’re right they knew they were probably taking Lochte along with Adrian to finals before the prelims … unless the morning swimmers put down some eye opening times to make them rethink that. I think with the benefit of hindsight it’s a fair question to ask why were they so sold on Lochte? The morning swims were surprisingly quick. I would have thought that might make them pause and reconsider that. The finals swim was only .27 quicker than their morning heat swim.… Read more »

Obviously, you already have an unwavering view of this relay’s selection. You see Lochte as being the only problem; you defend the use of Feigen; and, you defend the exclusion of Berens.

I would bet you that the coaching staff wanted and expected a 47.8 from Lochte and he delivered it. Any American fans would have been happy to know their 4th guy was going to be 47.8 … before the race.

“If he had Beren’s massive change over advantage then he’s very close to Berens time.” I don’t think so. Feigen benefited from an excellent .68 start. With a .07 start, he’s 47.7 … still 2 tenths from Berens. The relay was decided by 2 tenths.