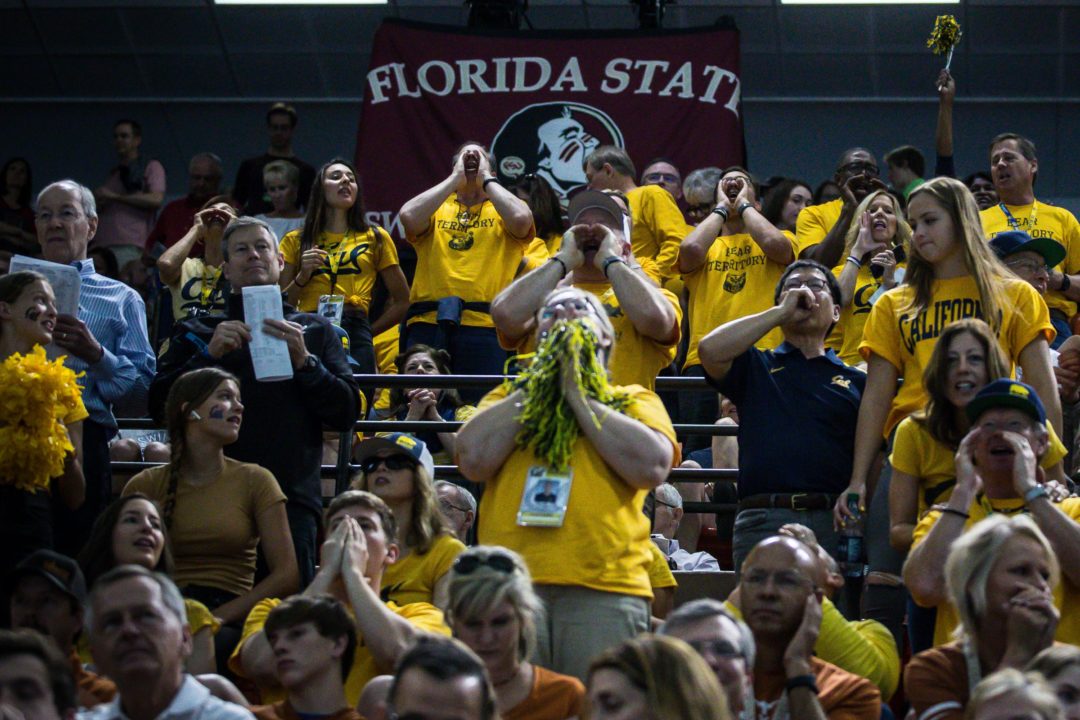 Cal men's swimming tweeted out a video of head coach Dave Durden reflecting on the 2019-2020 season so far, and previewing the upcoming weeks for his team Stock photo via Jack Spitser/Spitser Photography

Cal men’s swimming tweeted out a video of head coach Dave Durden reflecting on the 2019-2020 season so far, and previewing the busy upcoming weeks for his team. The Cal men are the defending NCAA champions, after they dethroned Texas last March after a 4-year run by the Longhorns.

Coach Durden provides an update on our squad's progress as we prepare for this weekend's dual meets at Spieker Aquatics Complex.#EarnIt | #GoBears pic.twitter.com/3X3BOon9xo

Durden starts out the interview by previewing the next 8 weeks for the Bears, and highlighting how quickly it’s going to go. Cal is hosting both Arizona Pac-12 opponents this weekend, taking on the Arizona Wildcats on Friday, and the Arizona State Sun Devils on Saturday. Friday against Arizona will mark Cal’s Pac-12 dual meet of the season. Durden goes on to point out that their schedule goes in 2-week increments starting this week.

Here is Cal’s schedule for the next 2 months:

Coach Durden then goes on to reflect on his feelings about the Fall semester of this season, mentioning that for some swimmers the focus this Fall was on qualifying for the Tokyo 2020 Olympics. One such swimmer was Zheng Quah, who missed the mid-season invite this Fall in order to compete at the SEA Games. Quah accomplished what he set out to, qualifying for Tokyo in the 100 fly and 100 back, as well as being named the SEA Games Most Valuable Player across all Sports. Hugo Gonzlaez was another swimmer who was absent for Cal at the Minnesota Invite, having skipped that meet to focus on the Swim Cup Amsterdam, where he ended up qualifying for Tokyo in the 200 IM.

Despite missing a few key members at their mid-season meet, Cal is still on track to run away with the Pac-12 title, according to the Swimulator. Here are the current Swimulator projections, as of January 23rd:

Although their standings in the Pac-12 are looking excellent, even with the absences, the NCAA projections are a different matter. According to the current Swimulator projections, Texas is holding a lead of over 300 points:

Neither team has swam enough meets this year. They need to race more.