Dagny Knutson to Get Her College Scholarship, After all 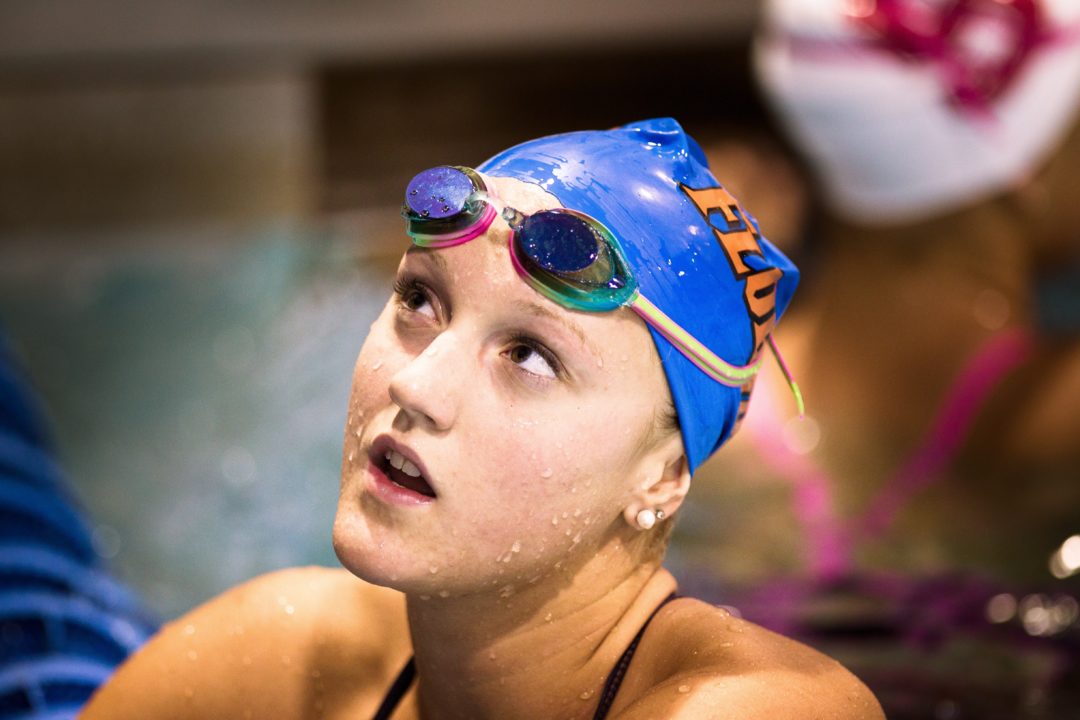 2011 World Champion Dagny Knutson had her NCAA appeal denied earlier this year, but she'll still wind up with a scholarship anyway. Archive photo via Tim Binning/TheSwimPictures.com

The Dagny Knutson-turning pro situation was all very strange. After Knutson committed to Auburn, the coaching staff there went through a significant shakeup, that included the very fast departure of Paul Yetter, who at the time was the ‘it coach’ in women’s swimming in the United States.

Instead of transferring or swimming out her career at Auburn, Knutson decided to turn pro. She had some success, qualifying for the 2011 World Championship team and winning a gold medal in the 800 free relay after training with the Gator Swim Club, but the success was fleeting.

Battles with an eating disorder and a lack of financial support led to Knutson retiring, making a comeback, and then retiring again in January of this year. Since then, she’s been coaching  high school at Century High School in North Dakota (the alma mater of Missy Franklin’s club coach Todd Schmitz, interestingly enough.)

And for all of this madness and chaos, Knutson sacrificed what surely would have been a full collegiate scholarship. She has unsuccessfully petitioned the NCAA for the return of her amateur status (likely on the basis of the very inconsequential financial gain she had as a ‘pro’), but because she had signed with an agent, her appeal was denied.

This morning, though, the New York Times is reporting that Knutson will get her scholarship after all. Thanks to Grand Canyon head coach Steve Schaffer, who pushed his administration on the matter, Knutsen has received a scholarship to begin studying at the university in the spring semester of this year.

Shaffer has opened the door for the 21-year old Knutson to do some student managing with his program, and has also said that she is welcome to train with his post-graduate group if she so desires, though her scholarship is based only on her maintaining good academic standing with the university.

Grand Canyon is transitioning from being one of the best Division II programs in the country into joining the NCAA’s top division, which means 4 years without an NCAA Championship meet to shoot for. Knutson’s presence on deck, in any capacity, will be some welcome excitement for that program.

In the least, this will allow Knutson an opportunity to complete her degree in education and gain back some of the missed opportunities that she’d had presented to her coming out of high school. In the most, it gives Knutson a team atmosphere in which to return to training if she so desires. After all, at only 21 years old, and as one of the best junior swimmers that history has ever seen, there would still be plenty of time if she wanted to make a push for 2016.

But most importantly now, for the first time in a while, Knutson has the opportunity to do what she wants; to do what makes her happy in swimming. She has the financial security of a scholarship; she has the support, but not pressure, from a coaching staff and a team; and most importantly the option to push all of that aside and study like a normal college student if she so chooses (and she says that the latter of these right now is her priority). This, Knutson said to the New York Times, is “basically a miracle.”

I think she made some poor choices, once pro you can’t swim in college.
She’s old enough to know you can’t blame every thing on an eating disorder.
White privilege, and not going to the Olympics, poor thing she hid in a treatment
center for 2 months. Brutal reply, but that’s how I see it from my view, plus
I am not a fan of poor me Dagny!

The sooner Dagny ceases to become a commodity, the better. I hope the wherewithal she demonstrated in achieving what she did, coming from where she did, can be put back to work to HER advantage. Godspeed!

The best news here is that Knutson appears to have a clear head, a great attitude of gratitude despite the questionable advice she was given by US Swimming, and good priorities. If she continues on this path, she’s going to do well in life regardless of whether she returns to swimming or not.

I’ve been impressed by Dagny for so long, since meeting her as a little 10 year old. I felt so bad when the Auburn situation happened, then to learn about the eating disorders. I hope so badly that this goes well and that she gets all the happiness she deserves. Best of luck to her!

Those trying to blame the NCAA for any of Dagny’s problems are pointing the finger at the wrong institution. The NCAA didn’t create the problem and only enforced their well known rules. Dagny made a decision, but it was made after very skillful manipulation by a world class recruiter/manipulator/coach who was in the employ of USA Swimming as the National Team Director at the time. At what point was it ever the job of anyone at USA Swimming to make home visits to HS Athletes to entice them to go pro and swim for a favored club program?

Promises were made and not kept. It was not the NCAA that made those promises.

1
0
Reply
Swammer
Reply to  not so fast

I couldn’t have said it better myself!!! It is unfortunate, and sad, that Dagny did not have promises kept to her by the very organization she represented and swam under.

I understand she made her own decisions (with apparently poor advice). But nothing should ever be black and white and there have been PLENTY of decisions by the NCAA that have been a shade of gray based on individual circumstances. It is quite apparent to me that Dagny was already sick when she was making her decisions that ulitmately affected her life as they did. What i say about the NCAA stands.

0
0
Reply
Anoymous
Reply to  not so fast

Poor choices for being so bright.

I dont disagree with you, but ncaa has to set rules for all sports. If there were no rules to defend against this type of situation then there would be all kinds of controversy surrounding basketball and football players. I am of the opinion that the ncaa is outdated and needs serious reform, but their handling of this situation is the only reasonable thing to do

I wasn’t aware Katinka Hosszu was running the NCAA.

This kid has had a tough few years. Leaving Minot, flying across the country and falling straight into the Auburn mess, the frantic searching for another program, another cross-country move, the flood in Minot, stress in her family, bad advice, eating disorders etc. That’s a lot for any 19-20 year old. I would advise her to concentrate on a degree and see what happens with swimming. Just take it easy and enjoy school.

Dave in Chicago said it all and beautifully.