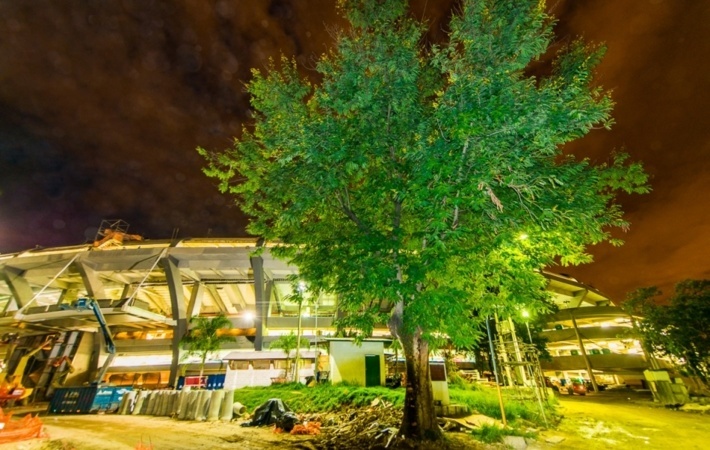 The new Olympic Aquatics Center, which will be in the shadow of the Maracana soccer stadium, will cost $218 million and be a temporary venue. Archive photo via Rio 2016™/Alex Ferro

The city of Rio de Janeiro on Friday announced a period of open bidding on the Aquatics Center that will be built for the 2016 Summer Olympics.

The center, which will be built in the Barra da Tijuca Olympic Park, is estimated at a cost of R$218 million (approximate $93 million USD). It will include a primary temporary facility with seating for 18,000 people and two 50-meter courses. The structures of the pool will be detachable, reusable, modular steel structures that will host swimming for the Olympics and Paralympics as well the water polo finals.

Diving and water polo will be held at the existing outdoor Maria Lenk Aquatic Center, which is currently being renovated ahead of the Olympic Games in a separate project.

The city explained its reasoning behind a temporary facility as due to the fact that “Rio de Janiero already has two aquatics centers, and the Maria Lenk and Julio Delamare facilities already have the capacity for national and international events. As there is no demand for another center in the city, the most cost-effective option was to build a temporary facility for swimming and water polo finals because over the lifetime of a permanent sporting venue, 60% of the costs are in maintenance.”

Originally, the plan was to leave the outer structure in the pool in tact for use as an Olympic Training Center, but that too has been scratched.

The release by the Rio office sang the praises of the relative frugality of the new construction in the Olympic Park as compared to the London 2012 Olympics. In total, new construction of a Handball arena, a Velodrome, and the water park will total R$641 million ($272 million USD); while that’s 9% higher than the candidature file estimated, the total net cost will be only about a quarter of the R$1.6 Billion ($680 million USD) of similar facilities in London.

Construction on the facility is supposed to begin in the first half of this year, and the contract includes 11 months of operating it at an additional $8 million cost. It is aimed to be completed in the first quarter of 2014, and will host a test event in April – likely to be the Maria Lenk Trophy, meaning that event, at least in prelims, would be open to all swimmers from Olympic countries around the world.

To see the full announcement, in Portuguese, click here.

Photos of those facilities mentioned in the article above.

Frugality? Both Maria Lenk and Julio Delamare Aquatic Centers look totally fine and can be renovated and modificated where needed. Why on earth all aquatic sports are not held in those facilities?

Oh, I see, most likely it’s not up to the city of Rio de Janeiro or Brazil but just because International Olympic Committee wants to see glistering brand new facilities with huge stands. It is nonsense and raises the costs of arranging the Olympic Games unnecessarily. If there are perfectly usable facilities already in place, there is no need for new ones. And no, there is no need for stands of almost 20’000 people for one meet only; not even in the Olympics, especially if large stands… Read more »

I would not take the blame of Rio so easily, corruption and politics getting public money is a very big problem here in Brazil… and I would take my bets that both side are corrupts getting money for their own purpose (Brazilian Politics and Old permanent buroucrats from IOC)

It is already time countries start to diminish the power of IOC.. Fifa acquired a power so big that it became the worst thing ever for soccer.. but things are slowly taking a change.. FIFA put so many absurd demands for countries to use their “FIFA Approved-level trainng centers” that most countries that are qualified for Soccer World Cup won´t use them for “free” and will use a structure paid by… Read more »

I don’t even want to know those issues concerning FIFA. And especially I don’t want to see photos of those fat people who are behind awarding a “soccer-nation” Qatar to host 2022 FIFA World Cup. Now they need to build numerous new huge stadiums for one event only, with some ridiculous cooling systems to keep temperatures tolerable. The stadiums that are never again seriously used after the showtime is over. Furthermore, they treat people, who are building those stadiums, like slaves.

First of all I think the presidency of these international sporting organisations should be restricted to one term only, being approximately 4-6 years. This applies to FINA, FIFA, ICO etc etc. Now we are seeing these life-time leaders which… Read more »

How ridiculous is that? Everywhere in the world swimming clubs have to save every penny to keep the sport alive, swimming facilities have to be closed due to a lack of maintenance or swimming programs are cancelled because there is no money.
So if the Olympics were truly about sport, they wouldn’t spend 100 Mill $ for a pool that is only to be used twice.
Or what about using that amount of money to do something serious against doping in elite level swimming?