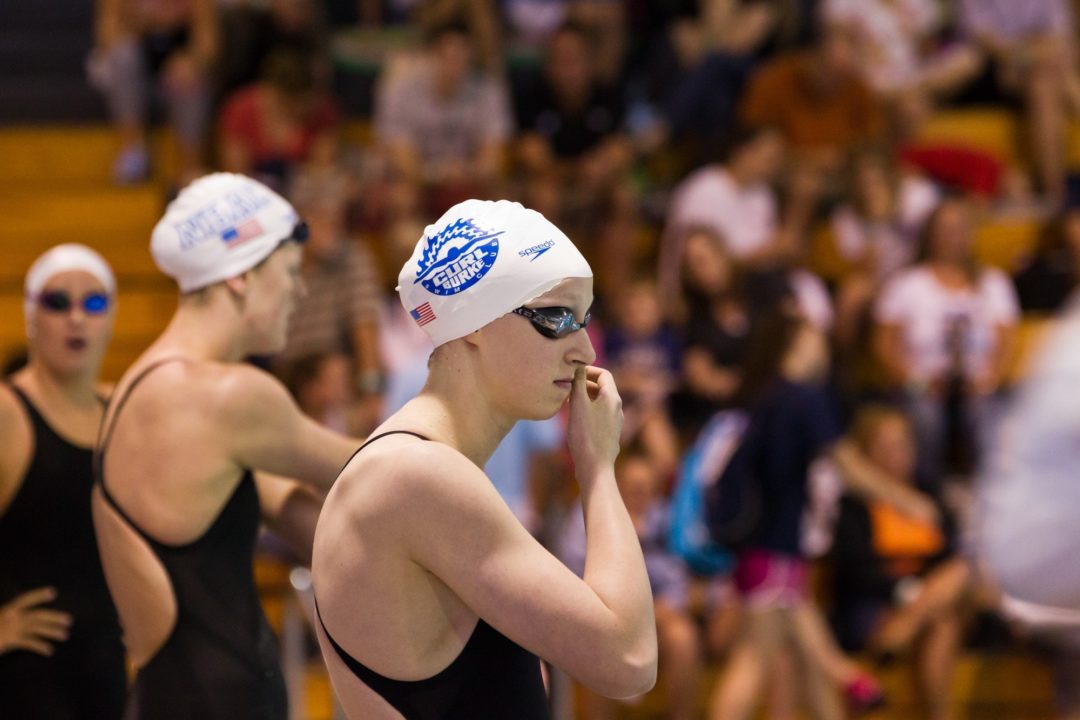 Former YMCA Swimming Head Official Don Varner died on May 22 at the age of 91 after dedicating over 25 years to the sport.

It has been an up-and-down summer for the mega-club formerly known as Curl Burke, now officially CUBU, in the Potomac Valley/Washington DC Area.

Competitively, though, they still churn out elite junior swimmers like few other programs in the country. With the scoring period over, CUBU has won their second-straight USA Swimming Virtual Club Championship in long course meters, earning 248,876 points to top arch-rivals SwimAtlanta with 246,655. That narrow, 2000 point margin is equivalent to two Katie Ledecky swims.

The scores are tabulated on the basis of the USA Swimming Database and the single age-group power point system (faster times = more points) for 11-18 year olds (17-18’s are combined on a single power point scale). To account for different sizes of teams, only the top two swimmers per event/age have their scores considered, and no swimmer can be considered for more than 4 events. The goal of these rankings is to compare clubs that might have different year-end focuses, based on season-best times.

CUBU/Curl Burke, with yards results included, is on a four-season streak of victories, after SwimAtlanta had won the previous two long course titles. Overall, their point total is the highest we’ve seen in long course since the 2006-2007 season.

Among CUBU’s major success stories are National Age Group Record destroyers Katie Ledecky(now the American Record holder at just 15) and Cassidy Bayer, who has taken big chunks out of Dana Vollmer’s NAG fly records. Other standouts include 15-year old Carsten Vissering, who won Junior Nationals in the 100 breast, and Andrew Seliskar, another 15-year old who was on the Jr. Pan Pacs team and swept the Jr. Nationals IM titles.

The majority of the teams at the top of this list are the typical juggernaut, huge-program powerhouses. After CUBU and SwimAtlanta came the Rockville-Montgomery Swim Club and SwimMAC Carolina, both former club champions (note the success of SwimMAC even without the inclusion of David Marsh’s post-grad group).

But next, in 5th, is a team that we’ve been alluding to the rise of for a few years now, finally coming to fruition: Nitro Swimming in Austin. Led by Mike Koleber, this team is only 5 years old, and is already in the top 5 teams in the country. The team came to be in 2008, and despite competing against well-established teams in the area (Longhorn Aquatics, Circle C), have clawed their way up the rankings. They were 14th last year, 21st the year before, and now after opening a second indoor, 50-meter, club-owned pool have burst into national prominence.

It’s not often that we see different clubs emerge near the top of these rankings, so for Nitro to come so far so fast is the biggest story of this year’s top 10.

The striking things about all of the teams at the top is not just that they’re big, but how they got that big. They are predominantly business-focused clubs that have paid business managers with business backgrounds. Egos are minimized, and customer focus is the key. This has allowed them to develop great facilities and elite, enthusiastic coaching staffs that have grown their memberships.

It would be great to see a breakdown of club enrollment along with these scores to see the talent pools available to pull from, but that is not discounting the quality that has had to be to build swimming empires and brands like those near the top of this list.

Also of note, the Sarasota YMCA was the highest-ranked YMCA team at 16th in the country.

Below are the top 10 teams from the long course season, along with their head coach. We welcome all to recognize their club and notable achievements in the comments (highest rankings ever, etc.)!

(If you really want to have some fun with club-swim-geeking, including rankings by Zone and LSC see all of the reporting options here.)

Note that many of these programs have head coaches for specific sites; we have listed the head coach for the overall program but welcome you to visit their websites to learn more about their staffs.

Congrats to CUBU and RMSC — interesting to note that these two powerhouse clubs come out of one of the smallest LSC’s in the country. So congratulations to Potomac Valley swimming, and all of the parents, officials, coaches and swimmers for being part of such a great club swimming environment. My children (CUBU swimmers) have certainly benefitted.

Thank you WHOKNOWS – was doing some historical research, forgot to swap back. Should be corrected now.

The LSC might be small in square miles but large in population which is what really counts.

That concentration of population offers PVS a huge benefit. It is one of the only, if not the only, LSCs in the country in which you can sleep in your own bed for all meets up to the sectional/national level. Would have loved that for my kids.