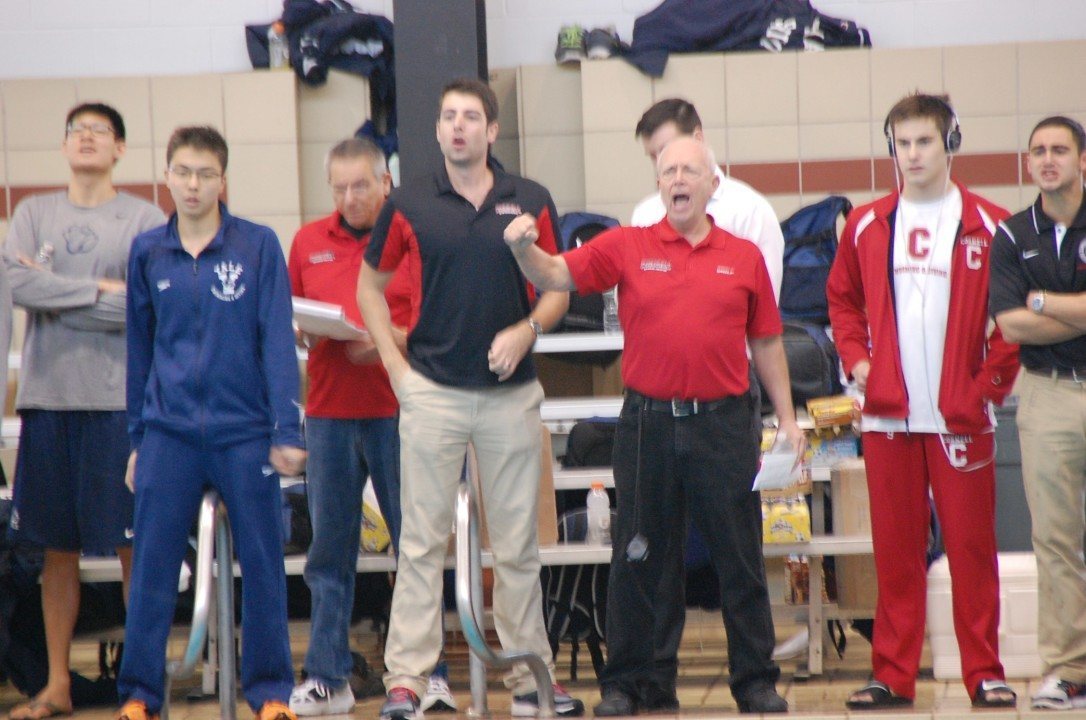 Joe Lucia, the Philip H. Bartels Head Coach of Swimming at Cornell University, has announced he will be stepping down... Archive photo via Anne Lepesant

Joe Lucia, the Philip H. Bartels Head Coach of Swimming at Cornell University, has announced he will be stepping down from his position. After 28 years at the helm of the men’s program and 15 years in charge of the women’s, Lucia will turn over the reins. He will, however, stay on as volunteer assistant coach and will continue to be in charge of alumni relations and fundraising.

In a Cornell press release, Lucia said, “I have goals for the program in alumni relations and fundraising and realize how important they are to making improvements for the team. It is an honor and privilege to be able to continue working closely with the coaching staff and alumni group and I am excited about it.”

Lucia is one of the winningest coaches at Cornell, with 224 combined wins to his name. In 2007 the Big Red men’s team went undefeated to win the regular season Eastern/Ivy League (EISL) title; two years later Cornell men finished third in the standings, their best-ever performance in the EISL meet. Lucia has coached numerous EISL individual champions, four of whom (Stefano Caprara, Dave McKechnie, Wes Newman and Mike Smith) qualified for NCAAs. The men’s team finished their 2014-15 with their best record since 2010-11. The women’s team, too, has had outstanding campaigns in each of the last two years, including an historic victory over powerhouse Princeton in 2013-14.

Lucia arrived at the Big Red in 1987 after having served as the head swimming coach of Union-Endicott High School and the Union Aquatic Club for 11 years.

With Lucia’s decision to step back, Big Red associate head coaches Patrick Gallagher (women’s) and Wes Newman (men’s) will take over as head coaches for programs that will be separated for the first time since 2009. Veronica Ribot-Canales will continue as diving coach for both programs and Robin Dyer will remain as an assistant coach for the men. A full-time assistant coach for the women will be hired in the coming weeks.

Gallagher, the all-time winningest coach at Saint Francis prior to returning to Cornell, guided the Red Flash to four consecutive Northeast Conference titles (2010, 2011, 2012, 2013). The two-time league Coach of the Year helped guide three teams that matched school records with 10 dual meet wins in a season. Gallagher recruited or coached 12 conference relay champions and 18 conference individual champions, as well as competitors that set eight conference records and 180 all-time top 10 school performances. He previously had been an assistant coach and recruiting coordinator at Cornell from 2001-03. Gallagher had been the assistant aquatics director at the Albany Country Club (1995-2001) and spent one season as head swimming coach at Methacton HS in Norristown, Pa.

Newman has been an assistant coach for the last six seasons, helping the Big Red to significant improvements in both programs. The Canadian Olympic Trials participant and NCAA qualifier rewrote the Big Red record book during his four-year varsity career, graduating as one of the school’s most decorated swimmers. A three-time Eastern champion, Newman holds five individual and four school relay records. He swam on five Eastern champion relay teams during his career as well. Newman qualified for the NCAA’s in both 2007 and 2009 in the 200 free, and finished in the top five at the 2008 Canadian Olympic Trials in two events (fourth in the 400 free, fifth in the 100 butterfly). A two-year team captain and the winner of the 2008 Richie Moran Award at Cornell, he was voted the team’s most valuable performer in each of his four seasons. Newman was a catalyst for the program’s undefeated 2007 dual meet season, as well as its third-place finish at the 2009 Ivy championship meet.