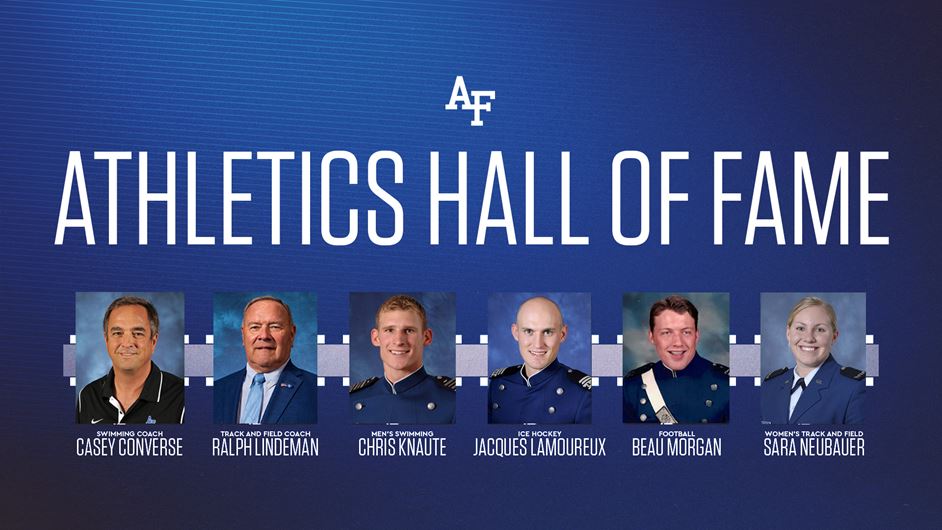 Converse is the winningest swimming coach in Academy history with a 305-202-2 record in 29 years as men’s and women’s coach. He led the women’s program to back-to-back national championships in 1995 and 1996. The women’s program was 73-21 from 1989-96 with five conference titles before moving to the Division I rank in 1997. He guided 32 athletes to All-America honors a total of 178 times. Air Force had 13 individual and four relay national championships during his tenure. The Falcons had 12 swimmers win conference titles and the Division I level. Genevieve Miller became the first service academy female swimmer to ever score at the NCAA Division I championships in 2016. Converse coached both teams from 1988-97 and then the women’s program from 1997 until his retirement in 2017.

Lindeman was in his 33rd season as head coach of Air Force track and field this season before his passing in March. Under his direction, the Air Force men’s track and field team has become the most decorated intercollegiate program in Academy history. Air Force has claimed 10 Mountain West team titles and finished within the top-three of the conference standings 35 times in 42 championship meets. Since his arrival at the Academy, the track and field team has combined for 31 Western Athletic Conference titles (27 individual events, four relays) and 178 Mountain West titles (161 individual events, 17 relays). Lindeman-coached teams have produced three NCAA champions, including Callie Calhoun – who earned five Division II titles during her career, Dana Pounds – who collected back-to-back titles in the javelin, and Mahala Norris – who became the Academy’s first female DI champion in a running event with the 2021 title in the 3000-meter steeplechase. Backed by 12 additional top-three finishes and 15 more placements within the top five, Lindeman has seen his athletes account for 89 All-America awards at the NCAA Track and Field Championships. He earned conference coach of the year honors 17 times and was a seven-time U.S. Track and Field and Cross Country Coaches Association mountain region coach of the year.

Knaute, a 2007 Academy graduate, still holds school records in four events (200 free, 500 free, 1650 free and 400 IM) and is a conference record holder in two events (500 free, 400 IM). He was a two-time All-American, nine-time Mountain West champion and two-time Mountain West Swimmer of the Year award winner. Knaute is still the only four-time team most valuable player in addition to winning two of the Academy’s top six athletic honors, winning the Outstanding Athletic Achivement award in 2006 and Athletic Excellence award in 2007. He earned the Mountain West’s Senior Recognition Award in 2007 and was later named to the 10th anniversary team. Knaute also participated in the 2005 U.S. World Championship trials and the 2008 Olympic trials.

Lamoureux, a 2011 Academy graduate, was a first-team All-America selection in 2009 and one of 10 finalists for the Hobey Baker Award, which goes to the nation’s top player. Lamoureux led the nation in goals with 33 and helped the Falcons to a program-best 28 wins and a trip to the NCAA tournament Elite Eight. He scored the game-winning goal in the Atlantic Hockey championship game and in the upset win over third-ranked Michigan in Air Force’s first NCAA tournament win ever. Lamoureux was named to the all-tournament team in the NCAA East Regional and became the first Falcon to ever win the prestigious Senior Class Award for ice hockey for excellence in the classroom, ice and community. He was also the Air Force male most valuable player in 2009 and 2011.

Morgan, a 1997 Academy graduate, earned third-team All-American honors in 1996 while becoming the first player in NCAA history to record back-to-back seasons with 1,000 yards rushing and passing. He earned Western Athletic Conference offensive player of the year honors in 1996 and was a finalist for the Davey O’Brien Award as the nation’s top quarterback. He is still the school record holder for career touchdowns with 42 and finished 10th in the voting for the Heisman Trophy in 1996, the third-highest finish ever for a Falcon. Morgan helped the Falcons to a WAC co-championship in 1995, just the second in program history.

Neubauer, a 2010 Academy graduate, earned All-America honors three times and is the only female to earn multiple All-America honors in the same meet in one year, earning the honor for the shot put and discus in 2009. She is a four-time Mountain West champion and 12-time all-conference selection. Neubauer earned U.S. Track and Field and Cross Country Coaches Association Regional Outdoor Female Athlete of the Year honors in 2010. She earned three team most valuable player awards and was a two-time team captain. Neubauer holds all four class records in the shot put, plus the record for a junior and senior in the hammer and the junior record in the discus.