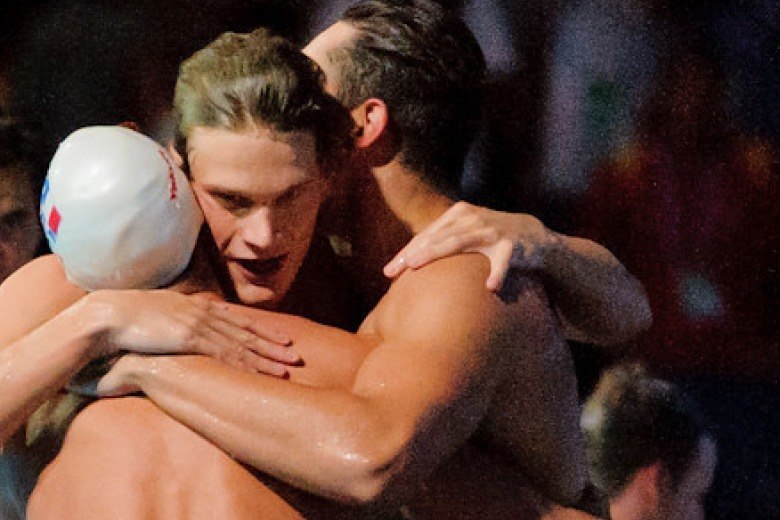 Yannick Agnel and Jérémy Stravius are the two favorites in the men's 200 free final, but the field is tight and the race will be exciting with 2 tickets to Rio in play. Archive photo via Victor Puig

No one said it would be easy.

When the French Swimming Federation (FFN) released its draconian time standards for qualifying to make the Olympic Games in Rio, some coaches and swimmers welcomed the challenge, other railed against it. But everyone knew what the new standards were, and coaches went about designing their programs to put their athletes in position to make the cuts.

Then came 2016 French Nationals and Olympic Trials and the harsh reality came down on everyone like a ton of bricks. From the very first event, a pall of disappointment hung over the Antigone pool in Montpellier. It was the men’s 1500 free, and top-seeded Damien Joly missed the Rio cut by 2.23 seconds, and even though he had already been under the French standard this season and was 15 seconds under the FINA A cut, he missed his opportunity to punch the first French ticket for Rio. It was as if the air had been sucked from the aquatic center; everyone shared in the disappointment. The same scenario played out in the next event, where Lara Grangeon broke the French national record in the 400 IM with 4:36.61 but fell 1.2 seconds short of the French Rio cut of 4:35.40.

In today’s 200 free final, however, it was a full-on theater of the absurd. Defending Olympic champion in the distance, Mulhouse’s Yannick Agnel, and converted-backstroker Jérémy Stravius of Amiens were the heavy favorites in a tight final in which any one of about five or six athletes could have conceivably earned a bid to Rio. The final was a three-man race, however, with Agnel taking it out fast and Stravius blasting a 26.7 over the final 50 to get the win. Agnel was very clearly second to the wall. He touched a full head-and-shoulders ahead of Jordan Pothain of Nautic Club Alp’38; everyone saw it. But when the results were posted, it read Stravius 1:46.18 – Pothain 1:46.81 – Agnel 1:46.99. Just as he had done in prelims, Agnel touched the pad too low and his time didn’t register at the finish. After his morning swim, however, the officials compared pad time to backup times and awarded him the faster of the two. After some 20 minutes of discussion, in which both Agnel’s coach Lionel Horter, and the FFN’s Technical Director, Jacques Favre, were seen at the officials’ table, the pad results were made official and Agnel was third.

Adding to the controversy was the fact that ALL THREE of the finishers, as well as fourth-place Lorys Bourelly of Toulouse, came in under the FINA A standard of 1:47.97 but missed France’s tougher mark of 1:46.06. Technically that means not one of them will compete in the event at the Olympics. Stravius’ time was fourth in the world so far this season, and all three were top-ten.

Favre has the ability to add 6 male and 6 female swimmers to France’s roster at the conclusion of the meet, but the controversy that swirls overhead has put a pall on the entire meet, and we’re only two days in.

He’s 23 and already looks washed up. And a turnaround really doesn’t seem imminent. Cant reay even blame his switch to US, it’s been. over a year. I remember him going 1:45 at Grand Prix meet. Now at the French trials he barely breaks 1:47. He was 1:44.2 at the 2012 trials.

Jacques,
As he’s been back in France over a year and is still a young man, what insights do you have to make such a ludicrous statement? Can you share them with us?

I don’t think he is washed up physically, burned out mentally perhaps. He had a fallout with his French coach before going to the US which was quite emotional and there perhaps is the key for his decline since. Whether or not he could absorb the intense dry land and swimming regimen of Bowman is another, independent, question.

So far, he remains the best French swimmer ever with two fantastic gold at the Olympics, as well as gold at World and the European championships on 200, 4×100 and 400 free. And as far as we know, he is clean.

Why would they even bother with cut times like that? What benefit does that give them? Is it a cost cutting tactic? They’re one of the best swimming countries in the world, just put people on the team, they have a history of taking care of the rest.

How do you touch a touch pad too low? Missing it high or wide seems possible, but why would his hand be so far underwater at the finish. It would seem impossible to do.

Pathetic evening.
Really shameful for national championships which serve as olympic trials.
All the confusion about standards and now the results of the men’s 200 free.

Bobo, the beIN Sports videos are all geo-restricted. I’ve been looking for something that will work in the US Zone for the last hour.

If you have a VPN service you can just connect to a french server and go around it that way. But I realize that not everyone has access to a VPN

Anne, ok. I didn’t know that.
I can’t find any other video elsewhere.

The results are now official. Really official this time. The president of the federation has just confirmed it.
And Agnel is ranked 3rd.
That’s the joke of the year.
But it’s really shameful at the same time.

He’s certainly on the lower part of the pad and should probably work on aiming his finishes a bit better, but it’s not as if he missed it completely, or barely caught the border of it. After watching the finishes around him, his doesn’t look significantly lower than anyone elses. With any properly functioning touchpad, I would think that would have resulted in an accurate finish. That being said, why did it happen twice to the same swimmer? Was he in the same lane for both prelims and finals? If so, did other swimmers have similar issues in that lane?

Regardless, this is why we have backups. If his timers were doing their job, his time probably showed up as… Read more »

yeah i dont get it, i thought when i read his touch was low, he would have been on the edge of the pad or something. that was “low” but a touch pad should register from corner to corner its why its there.

Yeah, and what about the Order of Finish (OOF) Official? We have those in USA meets!

Has anyone actually achieved a cut time yet? It seems like France may not do as well as everyone expected them to at Rio…

Coralie Balmy made the cut in 400 free

After being heavily involved in swimming for half a century, have seen a lot (such as the 1972 Men’s 400 IM Olympic championship decided by two-one-thousandths of a second, which led to taking it only to hundredths thereafter), but these French championships fall to new lows. It is truly the theater of the absurd. What else COULD we call it?