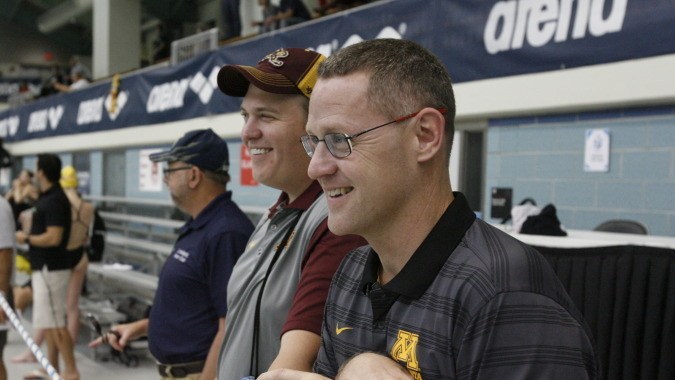 Competitor Coach of the Month is a recurring SwimSwam feature shedding light on a U.S.-based coach who has risen above... Current photo via Minnesota Athletics

As we did with our Swimmer of the Month, we’ll use our Coach of the Month story to recognize a team performance that didn’t garner massive headlines during the women’s NCAA Championships. We all know how well Cal swam, and coach Teri McKeever was awarded the CSCAA Coach of the Year award to recognize that. We all saw the dominant Stanford team Greg Meehan recruited and coached to a third-straight NCAA title.

But did you know that while McKeever’s Cal women went +44.5 from psych sheet scoring projections, and Meehan’s Stanford women went +63.5, coach Kelly Kremer‘s Minnesota Golden Gophers went +50.5 to rocket to 11th as a team?

We noted Minnesota as one of the teams we underrated heading into the meet – we projected them 13th in our final Power Rankings, only to watch a lights-out weekend from the Maroon & Gold.

What’s impressive is that Minnesota only had five swimmers competing at NCAAs – no other team in the top 11 had less than 10 swimmers invited:

Without the luxury of depth to rely on, Minnesota had to get the most out of each invitee. And they did – in fact, all five of their invitees wound up scoring points, four of them individually. Mackenzie Padington scored 32, Chantal Nack 21.5 and Lindsay Kozelsky 22 as the Gophers scored in all three of the relays they entered. And while the Gophers did have one of the NCAA’s better diving groups, that +50.5 margin was swimming points only.

Speaking of Nack, Kremer and his program get huge credit for turning Nack from a 1:50 freestyler/2:00 backstroker into one of the nation’s best mid-distance freestyler/backstrokers. Nack’s time drops over four collegiate years are consistent and astounding:

Also impressive: despite losing Nack to graduation, the Gophers return the fourth-most individual points of any program for next season. Stanford leads with 233.5, Cal is second at 143. Virginia sits third at 104 and Minnesota is fourth at 94.

Minnesota had a great season. Congrats to Kelly and staff!

Excited to see how the Gopher Men race! 〽️