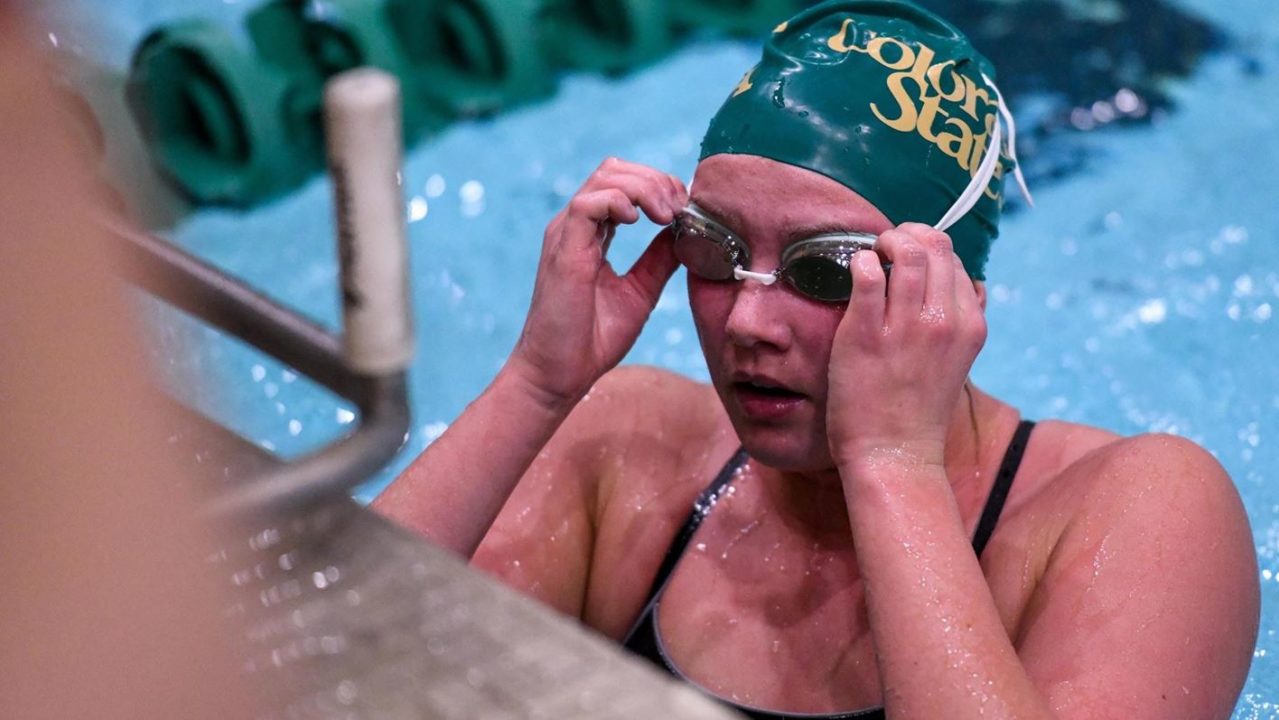 The Colorado State women picked up decisive 205-57 and 161-101 victories over Pepperdine and New Mexico, respectively, on Wednesday. Current photo via Colorado State Athletics

“The medley relay, I think that was our first time under 1:45 this year, not rested. That was encouraging to see our relays start to work together,” CSU coach Christopher Woodard said. “The double by Owenby, that was a good break for her and hopefully encouraging for her at conference. The breaststrokers and flyers were impressive, and those were four crucial events for us.”

Across the country, Colorado State’s divers competed against New Mexico (Pepperdine does not have a diving program), in Coral Springs, Fla. Junior Skylar Williams continued her strong season, hitting the qualifying marks for the NCAA Zones by placing second on both the 1-meter springboard and the platform, scoring 271.88 and 225.83, respectively. Her platform score ranks second best in program history.

On the 1-meter, Rachel Holland posted her best mark of the season to take fifth (252.90), and her 198.68 on platform is a personal best and ranks fourth all time. Freshmen Jessica Albanna 240.90 and McKenna O’Reilly 234.15 both showed improvement on the springboard, Albanna topping her prior best score by more than 30 points. This was just the second time this season the Rams have performed on the platform.

“The 1-meter went well,” diving coach Chris Bergere said. “Skylar was very good; she was really consistent and steady. Rachel and Jessica were also strong. I was pleased with the CSU women. We are making progress, and will be even more competitive at the end of the year.”

The Rams were not only fast in the California sunshine, they also displayed depth. Sydnee Whitty, who anchored both relays, took second in both the 50 and 100 freestyle, and Elsa Litteken was runner up in both the 100 and 200 backstrokes. Hannah Sykes was second in the 200 free, with Andrea Basile, Olivia Chatman, Kristina Friedrichs, Madison Hunter, Jennae Frederick, Sarah Mundy, Caroline Perry, Hope Jestes and Katelyn Bartley helping to pad the final totals with strong finishes.

The roster was basically full for the first time this season, as Hoffman’s win comes after nursing a sore shoulder, Friedrichs was back after a foot injury, Grace Siebmann saw her first action of the season and Ward is coming into form after missing the first part of the year. Woodard wanted to see a sense of urgency from the group, based off the ailments, but also with the season’s closing stretch just over the horizon. The performance set a strong tone to his liking.

“There’s an inspiration for these kids, that you can overcome those kinds of injuries and there is a light at the end of the tunnel,” he said.  “What we talked about was attitude, effort and execution. The attitude and effort were great, and the execution was there, for the most part. We made very few mistakes, and there was a lot of fight in them.”

The Rams will continue to train at their sites for a few more days, then return back to Fort Collins. Their next competition takes them to Colorado School of Mines on Jan. 17.

MALIBU, Calif. – The Pepperdine women’s swimming team completed the first meet of 2020 today in Malibu. Although the Waves fell to both Colorado State and New Mexico, Caroline Eckel led the Waves with a win in the 100 backstroke, posting a time of 57.93.

The meet started out with the women’s 400 medley relay in which the team of Eckel, Emily Morton, Haley Bergrthold and Amy Griffin finished in fourth place with a time of 1:49.79. The top swimmer for the Waves in the 1,000 freestyle was Morton who posted a best time of 10:49.60, good for fifth place.

Junior Sammie Slater was the leader for the Waves in the third event, the 200 freestyle, taking fourth place and swimming a time of 1:57.13. Eckel then owned the 100 backstroke, out touching all competitors with a time of 57.93. Senior Anna Riekhof was the top performer in the 100 and 200 breaststroke events, taking tenth and eighth respectively.

Morton posted a top-three performance in the 200 backstroke, finishing in a time of 2:07.47. The Waves leader in the 500 freestyle was Khloe McCarthy, who swam a time of 5:28.51. The final event was the 400 freestyle relay, wherein the squad of Trinity Ishikawa, Jenna Sanchez, Jasmine Williams and Griffin raced to the finish in a time of 3:39.11

NEXT UP
The Waves will be traveling to Loyola Marymount on January 17th and 18th for the WCC Cup.