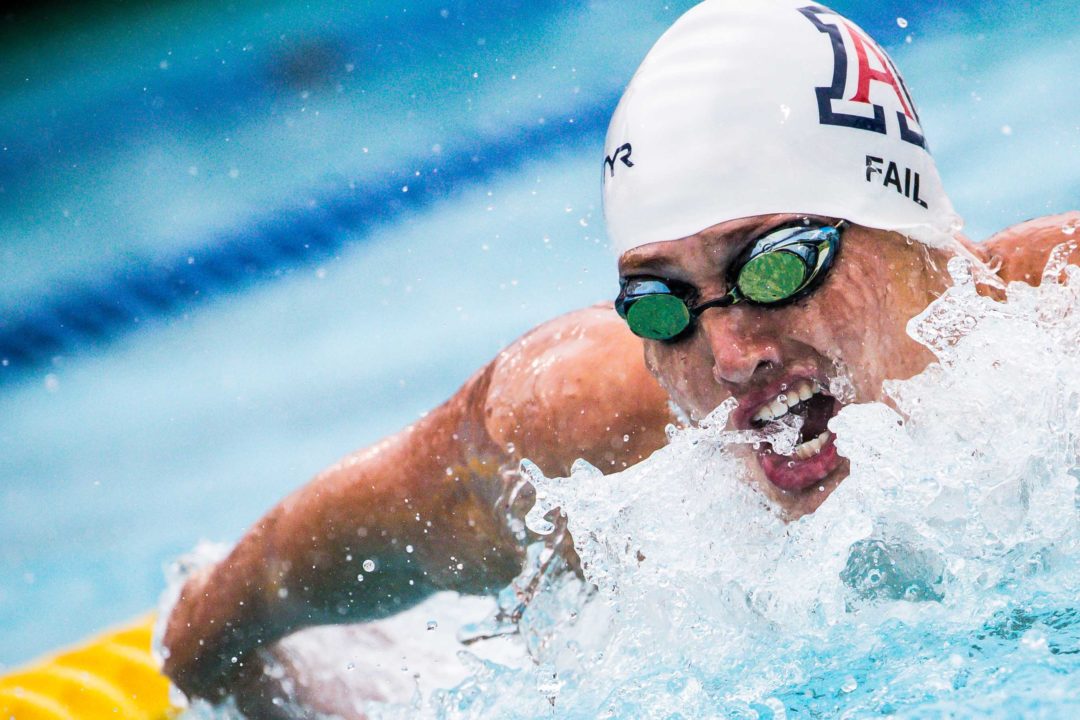 One big graduation leaves holes in the relays, but the Arizona men have a young core of returning swimmers, including fast-rising freestyler Brooks Fail. Archive photo via Jack Spitser/Spitser Photography

Year 2 under head coach Augie Busch was remarkably similar to year 1. Both teams wound up 16th at the NCAA Championships – a position where the Arizona men have finished in three of the past four years, with a blip in 24th the year before Busch arrived.

All five relays scored, which was the first time Arizona had done that since 2013, and ‘Zona scored about 30 more points, even if it didn’t translate to a higher placement. Freshman IMer David Schlicht was one of college swimming’s best rookies, making the 400 IM A final and B finals of the 200 IM and 200 breast. Sophomore Brooks Fail went from a last-minute NCAA qualifier and non-scorer as a freshman to the national third-placer in the 500 free.

Senior Chatham Dobbs made the 100 fly A final and carried a heavy relay load, while junior Jorge Iga and sophomore Sam Iida chipped in individual points.

All of Arizona’s projected points come from now-senior Jorge Iga, who is projected to move all the way from 13th into the top 8 in the 200 free with seniors factored out. Iga is also 19.6 in the 50 and 42.6 in the 100 to go along with his 1:32.5 speed in the 200, and could be a legitimate three-event scorer if he continues to improve.

Dobbs graduates away the program’s top 50 and 100 times from last year, and leaves the relays without their leadoff man. They’ll need rising Croatian sophomore Marin Ercegovic to step up to fill the gap. The six-foot-eight Ercegovic was 19.8/43.1 last year and had solid NCAA splits of 19.3 and 42.7.

Things are a little bit better in the 200, where Iga is a rising star and distance man Brooks Fail (1:34.4) could be on his way to scoring as a junior. The depth here is quite good, too: Daniel Namir and Aldan Johnston were 1:34 and 1:35, respectively, as freshmen and now-senior Brendan Meyer was 1:35 as well.

Brooks Fail has had awesome improvements in his first two years swimming for Arizona, and he could be an NCAA title contender as a junior. Fail was 3rd in the 500 last year and returns as the #2 only a half-second back of Sean Grieshop. 4:26 out of high school and 4:14 as a freshman, Fail went 4:10 last year and continues to heat up each year.

In the mile, Fail narrowly missed scoring in 18th place, but projects to score with seniors factored out.

Dobbs was the team’s best sprinter in fly, back and free, so his loss is going to sting. That said, the backstroke group still has senior Thomas Anderson, who has been a solid conference contributor. Anderson was 45.8 and 1:41.2 last year, good enough for an NCAA invite and right on the cusp of scoring, especially when you factor out graduations.

The depth is precariously thin, though. Matt Lujan was the other top backstroker and he’s graduated. 47.5/1:43.8 junior Jack Anderson is the next two-distance guy up, and junior Isaac Stump (1:43.5) could also take a step.

The team graduates Matt Salerno, the team’s sprintier breaststroker from last year, but Sam Iida returns as a junior with NCAA scoring experience. Iida was 13th in the 200 breast last year (1:53.13) and could push for an A final appearance with a number of top names graduating. Iida was more of a two-distance IMer who crossed over into breaststroke last year, but a 53.1 in a dual meet 100 breast might make him a decent full-time breaststroke candidate. At the very least, he’ll probably hold down the medley relay legs.

IM star David Schlicht is another good one, having gone 1:52.33 last year. Both he and Iida were in the B final, and could push each other to the A final this year.

The recruiting class does add a pretty solid breaststroker: Washington prospect Ryan Foote, who is 54.6 and 1:58.2.

The 100 will miss Dobbs again, but senior Noah Reid was 46.1 last year and only narrowly missed an NCAA invite. In the 200, senior IMer Etay Gurevich isn’t far off of NCAA scoring (1:42.54), and mid-distance freestyle senior Brendan Meyer (1:43.2) can also probably contribute.

IM is the real strength of this team, combining most of the top athletes we’ve already mentioned. David Schlicht was a standout last year, going 3:40.14 in the 400 and 1:42.38 in the 200. He’s quite possibly an A finalist in both this season.

Arizona didn’t have any invited divers at NCAAs last year, and Zone E spots are generally pretty limited compared to other zones. They did have two divers compete at Zones, and both Casey Ponton and Eric Correa made finals there.

Arizona does return 15 of 20 relay legs, but the four from Dobbs will be tough to replace.

On the medleys, it’s probably Anderson on back and Reid on fly. Neither will likely be as fast as Dobbs was, but neither is a glaring liability either. It’s possible the breaststroke legs actually take a step forward with Iida in the mix, and Iga or Ercegovic are solid anchors. They probably remain B final relays, but could actually move up from 16th (200 medley) and 14th (400 medley) last year.

With the 200 free depth this team has, the 800 relay should be loaded. Last year, Iga led off in 1:32 and Fail and Namir both went 1:33. It was actually Schlicht who was a little off his game at 1:35.0 on the anchor. They’ve got plenty of options to swap in: both Johnston and Meyer split 1:34.9 at Pac-12s. And incoming freshman Hunter Ingram is 1:36.1 out of high school with room to grow. If any of the ‘Zona relays are going to crack the top 8, this one seems most likely.

Most of the young pieces return for the Wildcats. You have to be excited about their stellar IM group, and the potential of Schlicht in year 2 figuring out the short course yards format. In fact, our projected “no senior” points have them scoring 40 points between the IM events – more than every other team in the NCAA but one.

Fail’s improvement curve is outstanding, and this team really seems to thrive in the mid-distances. The 800 free relay could be scary, and they should pick up solid points through the 200 and 500 frees.

The relays all feel maybe one piece short. There are still about seven months to coach up that final piece, and Arizona will need to do it – relay points are at a premium in college swimming. Without a stellar freshman class, it’ll be up to Busch to coach up the guys already on the roster. But based on a high number of returning points and some solid improvement curves over the past two years, we’ve got Arizona projected to move up from its two years in 16th.