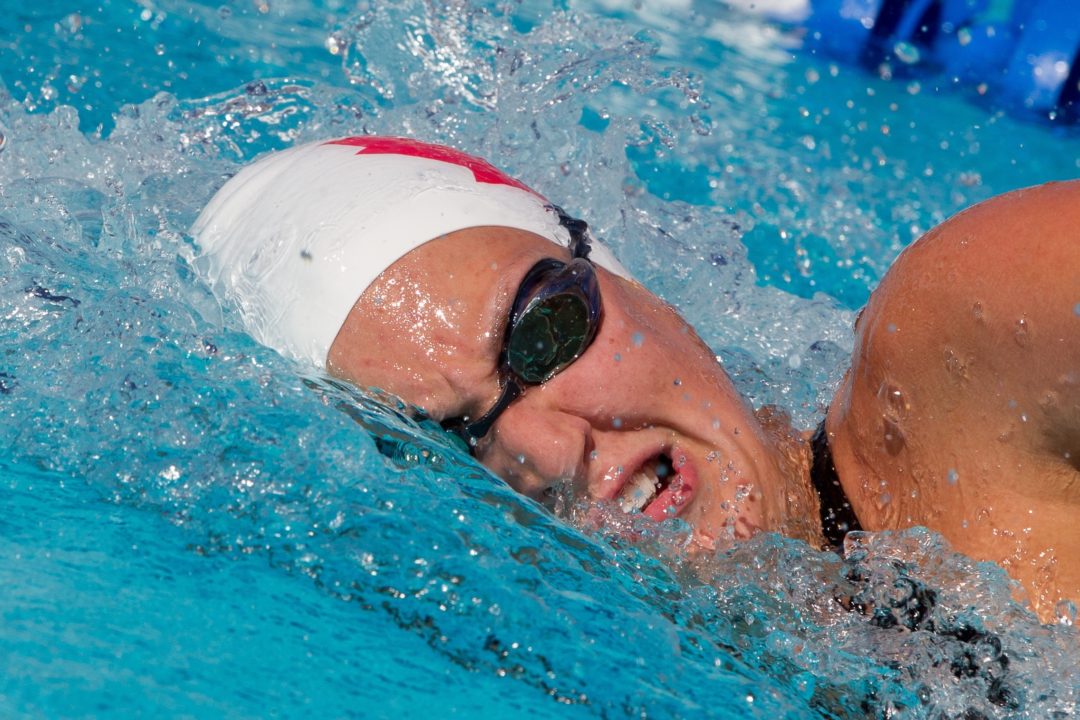 Tonight Allen will be looking for a sweep of the butterfly events by swimming the 200m fly... Archive photo via David Moll / University of Calgary

Last night the UBC Thunderbirds continued their rein of terror at the short course meters Canada West Swimming Championships, winning 10 out of the 14 events contested. The Thunderbirds currently are sitting in first place with a whopping 598 points followed by the University of Calgary Dinos who sit in second with 426.

Coleman Allen, one of two individuals to break a Canada West record at this meet did it again last night, this time in the 100m fly. Following his 50m fly record of 23.91 set on day one, Allen swam a 52.08 to blow away his competition and break his previous record of 52.39 from last year. Allen’s time is the fastest 100m fly posted by a Canadian this year. Last year Allen was a 51.88 at the CIS Championships; this year it’s looking as though he’s going to be even faster than before.

Tonight Allen will be looking for a sweep of the butterfly events by swimming the 200m fly. Allen took the top seed this morning and currently holds the Canada West record of 1:58.11 that he set last year.

University of Calgary’s Russell Wood swam an impressive 200m backstroke last night to break his own record of 1:56.40 with a time of 1:56.08. Wood took the third spot heading into tonight’s 100m backstroke final, but is the current record holder at 53.07 from last year. Wood will also showcase his speed in the 200m IM tonight after taking the top seed.

Tonight’s 200m breaststroke final should be a fast one as UBC Thunderbird Tera Van Beilen and UofC Dino Fiona Doyle will face off.  Last year Van Beilen beat Doyle at the CIS Championships 2:23.87 to 2:24.94. Tianna Rissling who won the bronze in that race will also be in the final.

Tristan Cote will be squaring off in the 400m freestyle for the Dinos tonight after posting a 3:56.24 to take the top seed heading into finals. Cote’s seed time of 3:49.72 is faster than the Canada West record of 3:49.97 set by UBC’s Mark Johnston in 2001. The freshman swimmer will be looking to lower that mark in tonight’s final.

Thunderbird swimmer and Olympian Savannah King will be swimming in the women’s 400m freestyle tonight. King currently holds the record at 4:06.55.