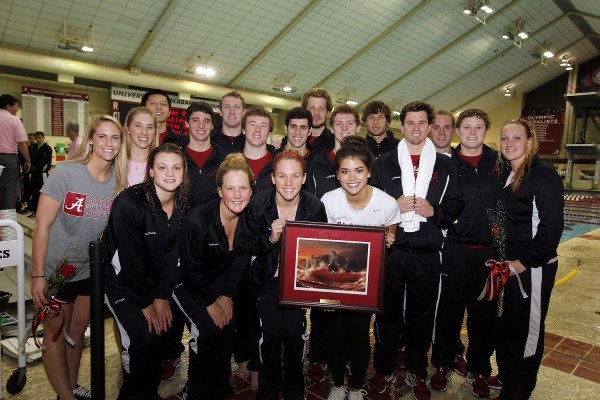 The Alabama seniors pose at the last home meet of their careers. Current photo via Jeri A Gulsby

The Alabama Crimson Tide were without their head coach Dennis Pursley for their Senior Day meet on Saturday after he was suspended for NCAA Level III violations, but that didn’t seem to damper many spirits as the Crimson tide rolled to exhibition-heavy 178-110 (women) and 196-92 (men) wins over Division III powerhouse Emory on Saturday.

The Alabama men’s medley relay got off to a good start, posting a 3:13.99 for the win with four really good splits. Connor Oslin led off in 48.48, followed by Anton McKee (53.84), Brett Walsh (48.33), and BJ Hornikel (43.34). The Crimson Tide’s breaststroke and freestyle legs are A-final worthy this season, and it will be up to Oslin and Walsh to help carry them to hopefully at least a B-final.

Alabama got really good performances from the freestyle group overall. That included a 1-2-3 finish in the 50 from Kristian Gkolomeev (20.33), BJ Hornikel (20.61), and Vlad Caciuc (20.75). Emory’s Ross Spock, one of the best sprinters in Division III, was a 21.29 for 4th – a time that will be a good confidence-booster for him as the conference championship season is nigh.

McKee, best known for his breaststroke, also swam some slightly-unusual events at the meet. He was a 4:32.10 to win the men’s 500 free, which he coupled with a 9:21.99 in the 1000 free. Those are respectable marks, to say the least, for a non-distance swimmer, and he could realistically swim the 500 free at the SEC Championships and score – which would be quite noteworthy from a breaststroker.

In his absence, senior Cameron Conners, swimming his last meet at home, made good work of the opportunity by winning the 100 breast in 55.95 – his best time of the season. In the process, he beat Emory’s Andrew Wilson, who ranks 4th in the country in his division this year. Wilson was a 57.0 here, which is just a second-and-a-half off of his season best.

Other seniors set up for big wins on their big day include Hunter Hinson, who topped the 200 fly in 1:51.65, which was two-and-a-half seconds better than the rest of the field.

The Alabama women also looked strong as they faced off against the four-time defending NCAA Division III Champion Eagles. There was, maybe, a little more back-and-forth in this meet than the men’s edition, as Emory actually pulled off a few event victories (without exhibitions), showing off their strength.

Those wins definitely didn’t include the 400 medley relay, however, where Alabama was 1-2 led by a 3:25.91 from their A medley. While Emory was over 20 seconds back, in a 3:47.97, their time was just shy of their 4th-in-the-country mark from their December invite, so it’s a good swim for them anyway.

It was the stars of the Alabama women’s team that took over, then, for a little while. Kristel Vourna won the 200 free in 1:51.72 ahead of teammate Bonnie MacDonald (1:52.79); while next Emma Saunders won the women’s 100 back in 55.89. She would later add a win in the 200 back in 2:00.33. Saunders is primarily a freestyler individually (she anchored Alabama’s 400 free relay in 49.83), but is also a very good backstroker; the emergence of Stephanie Kinsey this season means that Alabama can keep the Brit anchoring the medley, which makes them a much better relay.

Emory got back on the winning side of things with a 52.97 in the 100 yard freestyle. That was a much better swim than she had earlier in the 200 free, where she was just a 1:58.0 – almost seven seconds slower than her season-best.

Alabama will wrap up their senior when they play the visitor to Georgia’s Senior Day in a week in Athens, while Emory will host Sewanee next Saturday in their last dual before the UAA Championships begin.