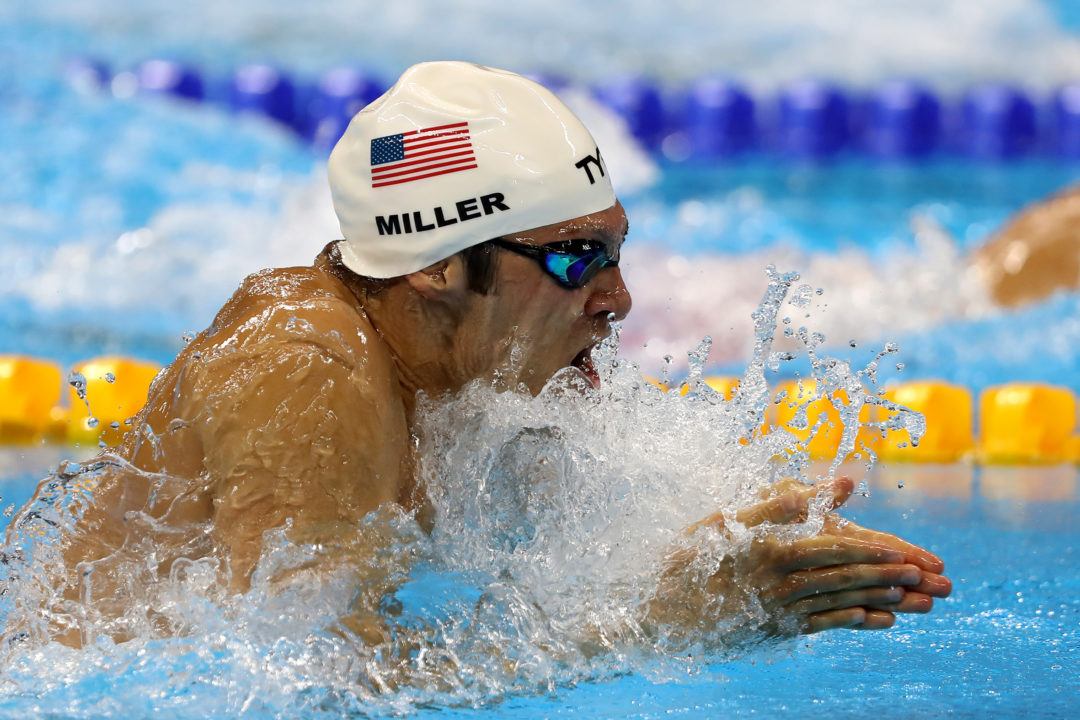 In the 100 breaststroke, Cody Miller placed third and he showed us why a bronze at the Olympics is just as awesome as getting gold. Current photo via Simone Castrovillari

For most people, third place is a consolation prize. Nice try, but no. Step aside to allow the first-place person to be glorified. You didn’t win.

Third place, to some, is a failure. Third place reminds us that there’s always someone else better than us. Actually, two people.

To some third place is the same thing as losing, a waste of time, a result that makes that person wonder if all the effort was worth it, whether they should just quit and stop trying to be first place because third place is just not fulfilling.

Third place gets you a Bronze Medal. Bronze medals are darker and less shiny than Gold Medals. There is some tinge of night-time in finishing third whereas first place is brilliant.

Except for one guy. Cody Miller is his name. The Las Vegas native who attends Indiana University won the Bronze Medal in the 100 meter breaststroke this week at the 2016 Olympics.

Of all the reactions by American swimmers who have won medals this week, no one has reacted with more appreciation, exuberance, and excitement than Miller.

It was refreshing to see how much he appreciated third place. Winning a Bronze Medal was a victory of enormous importance to him. By his excitement you could tell it felt as great to him as had he captured Gold.

Not expected to finish as high as third based on previous times, he overachieved in the biggest 100 meters of breaststroke of his life.

During post-race interviews, he is so far the one guy we will all remember from these Olympics whose genuine joy after winning a Bronze medal was authentic and blissful.

Perhaps it’s because of the road he travel to earn the right to stand on that glorious spot on the podium where an Olympic Medal was draped around his shoulders and hung on his chest.

Ironically, his chest is where his swimming career took root. Born with a sunk in chest, a medical condition called Pectus Excavation, he started swimming to monitor his heart and breathing.

His height, five foot ten inches, is another disadvantage he overcame. One of the shortest members of the men’s Olympic swim team, in a sport in which height often translates to faster swimming, Miller showed you can still be great, the third best in the world.

It’s not all about height. It’s about heart, specifically, Cody Miller’s heart.

In one other obvious way Miller differs from most other Olympic swimmers. Whereas most of them have military-length haircuts, his hair hangs long in the back to almost his shoulders.

He is a different type of guy who had a different – and more appreciative – reaction to winning a Bronze Medal than anyone in this Olympics and anyone I can remember.

To Cody Miller he had won the Gold.

By the way he reacted, we all feel the same way.

This article was written by Charles Hartley.

Cody is a great breaststroke talent that was fortunate the best coach to help him achieve his Olympic dream.

The right coach or the wrong coach will make all the difference.

Congrats to his coach Ray. Cody and Lilly King were his first Olympic swimmers and medalists. Both in the breaststroke.

Cody’s reaction was awesome. Just as boisterous and celebratory as Peaty’s. So I’m with this article on that count.

However, I dispute the tone used to describe athletes’ reactions to bronze. As an experienced couch-potato olympics watcher, I’d say the two happiest people on the podium are the winners of the gold (cuz they won) and bronze (cuz they medaled). It seems, to my entirely unscientific anecdotal eye, that the silver medalists are usually the most disappointed, dwelling on what they were oh-so-close to. (Note, i don’t see a lot of disappointed silver medalists, but when you see a disappointed medalist, is seems more often to be the silver than the bronze).

Great article, Charles. Cody is an inspiration to those of us with pectus excavatum.