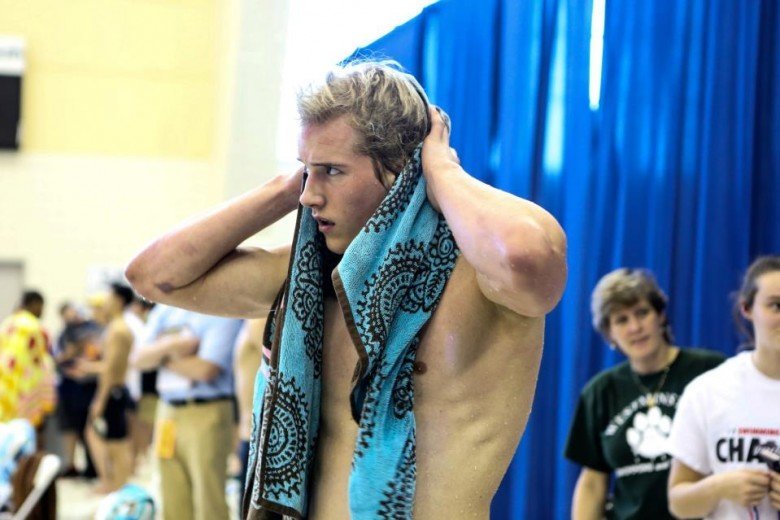 Paul Powers has made an early commitment to Mike Bottom and Michigan. (Photo: Shanda Crowe/Shandacrowe.weebly.com)

Just as soon as the high school class of 2013 is about wrapped up in their college commitments, it’s already time for the class of 2014 to get underway.

Georgian Paul Powers has made an early verbal commitment to the defending men’s NCAA Champions the University of Michigan, two weeks shy of the opening of the free contact period.

Powers, who swims for North Hall High School in Gainesville, Georgia, and the Splash Aquatic Club, said “I like Coach Bottom’s approach to sprint training and his strength and conditioning team.  Conner Jaeger and Sean Ryan walked with me through the Engineering school and those guys are a blast.  Serious, but very funny.  I could really relate to their interest in academic rigor and the highest level of swimming.  One of the reasons I like Michigan was because of the engineering program, which is one of the best in the country.  Also, from the conversations I had with the team, I can see that Coach Bottom really respects his athletes and cares about them as individuals first.”

He is coached by Andy Deichert, formerly of the Race Club, and former elite-level swimmer Sabir Muhammad, giving him a great mentorship structure.

“I think very highly of the Michigan program because of Mike Bottom’s out of the box training methods, and style of teaching, which fits well with Paul being an athlete first,” Deichert said of his former Race Club colleague Bottom. “Paul is a very intelligent swimmer who thrives on continuous analysis and feedback in order to learn better ways of achieving a more proficient stroke, which also fits well with the Michigan coaching style.”

Powers has also played on the basketball team at North Hall, speaking to his overall athleticism. Bottom has had great success with turning those athletes into monumental sprinters and especially relay contributors. This addition will greatly increase the rebuilding process for the Wolverines, who didn’t graduate a ton of relay points, but did lose a lot of really important relay legs.

Powers is among the top 5 American sprinters in the class (that includes Brett Ringgold, Ryan Held, Caeleb Dressel, and Edward Kim)

His stroke is sub-par and his turns and underwaters are atrocious. If Mike Bottom refines his stroke, he could potentially be untouchable in the sprint events- even through the 200.

Congratulations to Paul! Smart move on his part and very smart of Michigan to grab him early. No doubt Coach Bottom will help him develop Paul into one of the top sprinters in the nation. Very exciting future for Michigan sprinting.

Great coaching by Andy Deichert who has gotten Paul and Ty to such a competitive level in only a few years of swimming.

Great job by this young man, the sky is reachable. Train hard and success will follow more than you can even dream. Great job Coach Andy Deichert

Two things:
1. I also watched the 43.99 swim, he looked very raw, so that means his potential with better little things is huge
2. He has a fast 15 year old brother, new Ortiz brothers!!

Seriously impressive times for a swimmer of his age. Anybody know how tall he is? Just seen a video of him on youtube (swimming a 43.99 aged 16) and he looks massive!

Can’t believe this is the first comment on this story…this is a pretty significant signing.

I was really surprised too. I’d rather not spill my thoughts, though. No papers have been signed yet I’m sure, but it’s still interesting how high schoolers are increasingly pinpointing their futures this early. Is this similar to what happened to Northwestern and Andrew Jovanovic? Although it’s different since Jovanovic has trained in the facility for much of his life. Powers is a different case.

Ok Braden, here it goes. This is an amazing and much needed pickup for Michigan. Michigan pretty much graduated almost all of its sprint core last season and now only has one person who is a sub 20 in the 50 free (B.Ortiz). By the time Paul Powers gets on campus, he could be in the range of a 19.75 which will be instrumental in relays.

Mike Bottom will do a great job with him as big tall athletic type swimmers do well in his system. The Ortiz brothers were monsters in size and frame and Paul has the frame and seems as if he will also put on some good muscle weight.

Now, with his signing, I… Read more »

Great pickup for Michigan. Terrific school and Bottom is a great sprint coach. How big a priority was Powers for Georgia? Don’t understand how the Dawgs can be such a power in women’s swimming, but can never quite get there on the men’s side? They had an incredible men’s recruiting class year and they need to build on that momentum in this recruiting cycle.

duckduckgoose – my guess is that the push to go to BOttom was big because of the Race Club connections. Just a hunch, though.

it seems he wanted engineering and uga isn’t known for their engineering, if they have any at all?

Your question has everything to do with how men and women respond differently to large amounts of overload aerobic threshold endurance training……and specifically with how it relates to sprinters. Answer that question first and then you’ll understand the correlation between Georgia men and women.

If you’re a sprinter this is a no brainer right off the bat, without even bringing into question the difference in the engineering programmes.

Not that it matters and I could have gotten some bad information, but I don’t think Bottom specifically works with the sprint group these days.