As close as they come: Texas and Cal tied in Day 2 prelims scoring 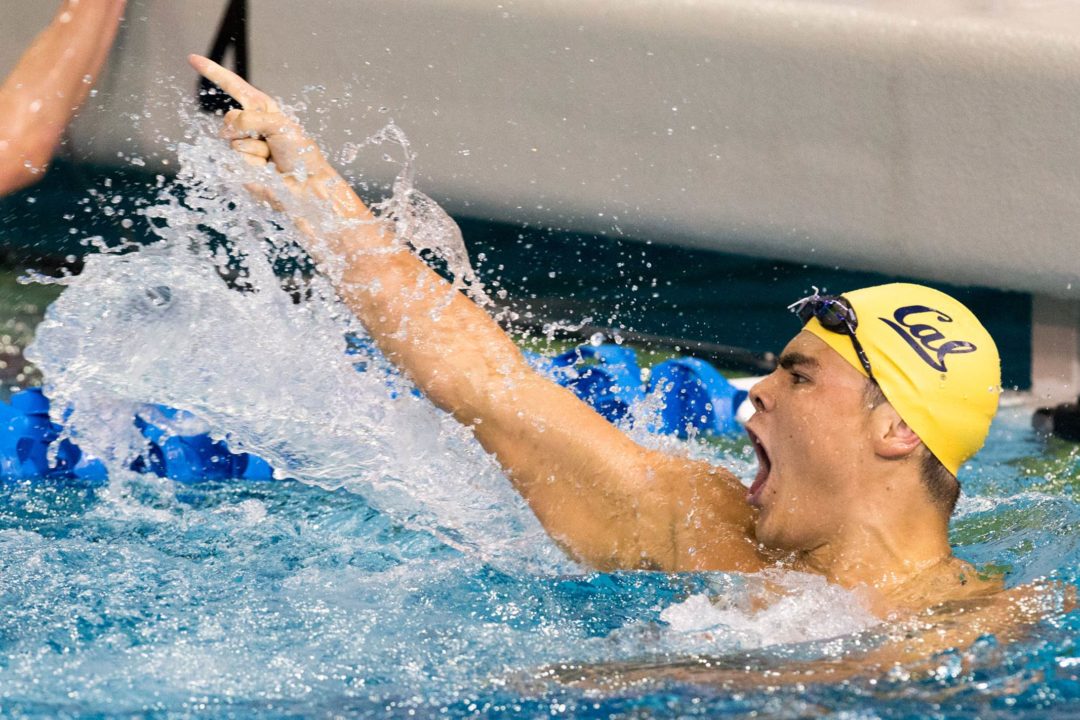 Cal gained 46 points from seeds this morning, a big gain - but it still falls short of Texas, which picked up 76 and is projected to score the exact same amount of points as Cal tonight (not including diving and the 800 free relay). Current photo via Tim Binning/TheSwimPictures.com

At the halfway mark, this NCAA Championship has been one of the closest in recent memory. Scoring out the prelims results tells us one thing: expect it to stay that way.

Separated by just a single point after last night, Cal and Texas are each in line to put up exactly 157 points tonight based on prelims swims, keeping the projected standings after tonight still incredibly tight.

These projections, of course, don’t include diving (where Texas is likely to get a big boost) or the 800 free relay, which has early heats already completed by will wrap up tonight with the final two heats featuring both Cal and Texas (though the psych sheet scoring does include the 800).

For Texas, those points came everywhere, as the Longhorns are projected to score more than they were seeded in every event besides the 100 breast. Their biggest event will be the 100 fly, where a psych sheet 29 points became a prelims 44 with Jack Conger moving up and Tripp Cooper and Will Glass both making the A final.

Cal got a big boost in the backstroke, with Ryan Murphy moving up to the top seed and Tony Cox rising to join him in the A field.

That’s in stark contrast to the other two teams in the title hunt at this point, Florida and Michigan. The Gators lost 17 points from seeds, with the biggest drop coming in the 400 IM, where 5th-seeded Sebastien Rousseau missed the A final. Michigan got stung right away in the 200 medley relay when a 4th seed became 9th place, meaning the most the Wolverines can score is 18 points compared to their projected 30.

Reminder: these numbers do not include 3-meter diving or the 800 free relay:

In addition, we’ve combined these projected prelims scores with each team’s current point total after day 1. That should give us a projected picture of what the overall team scores will look like tonight after the 100 back and before 3-meter diving and the 800 free relay begin.

The 1-point margin between Texas and Cal remains stable. Even a disappointing morning by Michigan doesn’t have them completely out of the hunt, as they were seeded to score a lot of points today. Based on prelims, the Wolverines are projected to trail Florida by just 10 and Texas by just 50 heading into tonight’s final two events. Remember, also, that the Wolverines are the reigning U.S. Open record-holders in the 800 free relay to happen later tonight.

It’s also worth pointing out that the psych sheets are much kinder to Texas and Cal today than tomorrow. Both of those teams will have to do the brunt of their work today in building a lead big enough that Florida and Michigan can’t make it up on the final day, as Saturday has some good events lined up for the Gators and Wolverines.

Georgia looks like a solid #5 at this point, with Arizona and USC battling behind them. Also of note is that based on prelims results, Alabama and Louisville could each be running just inside the top 10 after tonight, though there’s a whole host of teams hot on their heels.

my goodness. is this with diving points? or without? I really do hope that the bears hang in there with the horns!

Without… and with one of the Texas divers struggling… it’s just going to be about 15-20 points from the boards for Texas… so if all goes without disaster (DQ, etc), Texas will carry a ~20 point lead to Saturday over Cal with Mich/Fla lurking.

IMO it will be just about even at the end of the night. The meet is a little more nuanced than just scoring psych sheets and prelim sheets. For example, Cal will in all likelihood move from 8th to 1st, 2nd, or 3rd in the 2mr. Texas can’t move up there. Texas I’d guess moves up to challenge the top 3 in the 8fr, with Cal on their tail. Cal has a bunch of B points wout much room to improve, and Texas has a bunch of A points with not much room to go down. It is mostly even except that the diving is apparently not quite as gang-busters as yesterday, and that first relay could mean a nearly… Read more »

Without but the Texas divers aren’t doing as well as in the 1 meter.

thanks guys. it’s so hard to keep up with diving b/c they only announce the first names and I can’t tell what school they are representing!

With 1-meter being their weakest event, the horns will probably go 2 up 1 down in the 3-meter tonight.

Hixon is the top seed from prelims but no other A finalists. I didn’t catch the B finalist but Chandler didn’t look good and Bowersox had a horrible 3rd round.

off topic but Vinny Marciano is looking to tear up the NAG record book at the 2014 Speedo Champions Series Long Course sectional meet in Buffalo this weekend.

Video of the 200IM final: https://www.youtube.com/watch?v=t8aGSGEgwVk

Doesn’t Lane 1 clearly do an illegal back-to-breast turn, never even putting his hand on the wall?