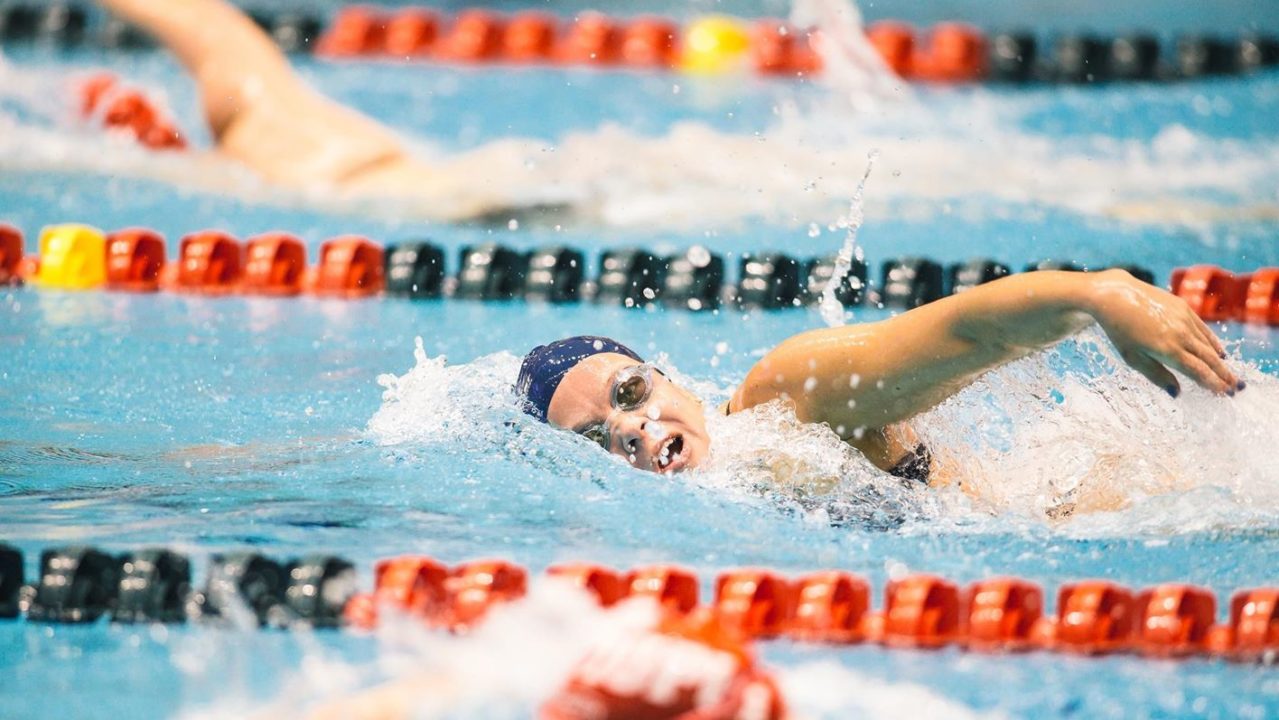 The CSU men sit in first place with 497 points, close to 200 points clear of second place, while Xavier holds a slight lead over the Viking women. Current photo via Xavier Athletics

CLEVELAND, Ohio – The Cleveland State University men’s and women’s swimming & diving teams won four races and posted a pair of NCAA Zones scores on the boards as the Vikings hosted the opening day of the Magnus Cup Friday inside Robert F. Busbey Natatorium.

The CSU men sit in first place with 497 points, close to 200 points clear of second place. The Viking women are locked in a tight battle for first as they are second with 318.5 points but sit just 1.5 points out of the top spot.

Junior Matt Akers put forth an impressive showing on the 3-meter diving board to lead the Viking cause Friday.

Akers won the event going away as he finished with 377.50 points. That effort followed his score of 388.20 in prelims, which saw him finish nearly 70 point ahead of the NCAA Zones standard. He surpassed his personal best entering the day by over 55 points. All of Akers’ dives Friday netted at least 51 points while eight of the 12 tallied at least 60 points. His highest score dive was a reverse 1.5 somersault, 3.5 twist free that earned 78.75 points.

CSU swept the top four spots in the event with all four notching a new personal best Friday. Junior Trevor Mahoney finished second with 306.90 points, nearly 20 points higher than his prior PR, senior Antony Styrt took third with 286.10, after scoring 310.15 in prelims, while sophomore Konstantin Vincent was fourth with a new personal best of 278.90.

Juniors Timothy Kubacki and Dominik Niedzialek both won individual events Friday with the latter also swimming on a winning relay.

Kubacki won the 200 IM in 1:47.79, more than two seconds faster than his personal best entering the day. In doing so, he became the second-fastest performer in program history.

Niedzialek won the 500 freestyle with ease as his time of 4:26.66 put him more than six seconds clear of the field. His time was also a new Magnus Cup meet record.

Kubacki had posted the second-fastest time in prelims, shattering his PR with a 4:27.88, but scratched for finals. He became the sixth-fastest performer in school history with his prelims swim.

Senior Dominic Poletta led a number of Vikings to place highly in the 50 freestyle.

Poletta was the runner-up in 20.40, senior Jack MacDonald took fourth in 20.76, senior DJ Arslanian placed sixth in 21.01, Stevenson was seventh in 21.08 and junior Ryan Sedlak was eighth in 21.22. Stevenson had reset his personal best in prelims by over a quarter second.

The CSU men also won both relays contested Friday and had four top-three showings overall in the two events.

In the 400 medley relay, Niedzialek, Krusinski, senior Matthew Martin and Poletta won in 3:18.42. Kubacki, Stevenson, Arslanian and MacDonald were the runners-up in 3:20.01.

Freshman Emma Kerro had one of the more noteworthy efforts for the CSU women with her performance in 1-meter diving. Competing at home for the first time as a collegian, Kerro finished in third place with 288.05 points. Her score surpassed the NCAA Zones standard by over 20 points and was fewer than six points off the school record. Kerro’s best dive in finals was a reverse 1.5 somersault pike that earned 54 points.

Junior Lexie Kostelnik had the highest individual finish by a female Viking Friday by leading a strong CSU showing in the 500 freestyle.

Kostelnik was the runner-up in the 500 in 5:00.13. Freshman Rachel Contich was third in 5:00.60 while fellow newcomer Sule van der Merwe was sixth in 5:01.34. Both new Vikings moved into the top 10 performers list with their efforts Friday.

Three other Vikings scored in the event, two of whom reset personal bests. Freshman Caroline Hughes won the consolation final in 2:07.58, junior Shaw Barney finished 16th (2:08.88) and freshman Abigail Ramey took 18th (2:09.75). Hughes posted a new personal best in finals while Barney did so in prelims.

Senior Gabriella Marinelli was CSU’s top finisher in the 50 freestyle, placing eighth in 24.11 seconds, while all three Vikings that swam in the consolation final reset personal bests.

Weclawiak, Frank, Marinelli and Jaszcz had the fastest 200 free relay finish for CSU, taking fifth in 1:36.29. Senior Chuchu Yang, Cartwright, Bahr and Hughes were seventh in the same event in 1:36.89.

Yang, Cartwright, Jaszcz and Weclawiak finished fourth in the 400 medley relay to provide the top finish for the Viking women in 3:49.81. Hughes, junior Libby Smith, Barney and Marinelli took eighth in 3:52.20.

Cleveland State will host the second day of the Magnus Cup Saturday with six individual events and two relays for each gender.

CLEVELAND – Men’s and women’s swimming wrapped up the first day of the eighth annual CSU Magnus Cup Friday evening. The women completed the first day in first while the men sit in third. The meet continues tomorrow, Saturday Nov. 23 at 9 a.m.